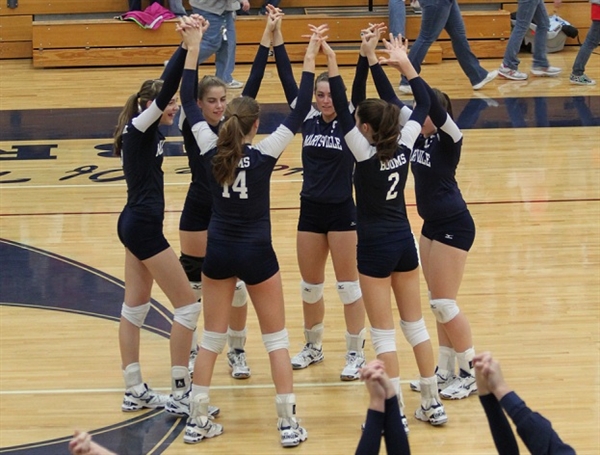 The same dreams have made their way around the Marysville volleyball team the last two months.

A player woke up in the middle of the night saying “Coach, Coach,” thinking she’d heard the voice of John Knuth.
Another woke up stretched out like she was about to block a spike, perhaps responding to one of his commands from the bench.

The longtime Marysville coach has been on his players’ minds for obvious reasons since leaving the Oct. 1 Mount Morris Invitational in an ambulance after suffering a heart attack.

Although recovering now, he hasn’t returned to the team and won’t for this weekend’s MHSAA Finals – the first championship weekend appearance for the storied Vikings program since 2006. But that doesn’t mean Knuth won’t have a presence at Battle Creek’s Kellogg Arena.

“It’s actually funny. The first couple weeks of practice after he was gone, if I screwed something up and I was thinking I was doing something wrong, instead of hearing my voice say it (in my head), I would hear his voice,” Marysville senior Haylee Booms said. “We became attuned to his voice.”

Class A and D Semifinals were played Thursday, with B and C tonight. Marysville (49-9-4) faces Tecumseh in their Semifinal at 7:15 p.m.

Leading the Vikings will be first-year coach Kristen Michaelis, a former Marysville and U.S. national team standout who took over the program this fall as a co-coach with Knuth – who entered the fall third in MHSAA volleyball history with 1,135 wins, a .935 winning percentage and nine MHSAA championships.

Although Knuth had previously stopped coaching the team after the 2006-07 season, these players certainly knew the significance of an opportunity to play for him. “Him telling me I did a good job, it’s just a dream come true because you know if it’s coming from him, you’ve done good,” Booms said.

Knuth and Michaelis replaced Paul Levandowski, who coached from 2007-10, and the plan was for Knuth to take the lead role early and progressively transfer responsibilities to his former middle hitter before retiring from coaching completely after the season.

Michaelis didn’t expect to take full control so suddenly. Knuth said he didn’t feel well after that first match at Mount Morris, and then didn’t return to the floor the rest of the tournament. He left for the hospital, and although the players sensed something was up, Michaelis didn’t tell them what until after the last match of the day. The team came together for a tearful group hug.

“Obviously, it was hard for the girls to deal with, but I told them we’d all work through this together.  He’s on our minds, but he would want us to push forward and have successful season,” Michaelis said. “I knew my role would have to increase. I would not just be a coach, but kind of a mentor for the girls. They are pretty big shoes to fill.”

The Vikings dropped their first match after Knuth was hospitalized, three days later against Macomb Area Conference Red foe Macomb Dakota. But they bounced back to sweep the rest of their league opponents 3-0 and claim the conference championship. Marysville didn’t give up a game in the District or Regional before falling in the first against Frankenmuth – and then coming back to win the next three.

Michaelis had been a Marysville assistant the last two seasons, and played on the 1997-2000 Marysville teams that won the first of eight straight MHSAA titles. But she brought a variety of experiences back into the program – she went on to earn All-America recognition for Fresno State after high school, and then helped the U.S. team to a bronze medal at the 2007 Pan American Games.

She’s incorporated her own drills and style, and Booms said the coaches bring different approaches both in relating to the players and motivating them to improve.

“We always knew from the beginning that it was a special team. We knew what the potential was. But whatever happened, something just kinda clicked,” Michaelis said. “Maybe a little more to play for him. Our league is one of the best on the east side, and we knew none of the teams would come out of it undefeated. … We’re still thinking about Coach, but we’ve turned it into a positive thing, not a distraction.”At team dinners the players say a little prayer asking for Knuth to return to good health, and do the same before every game. Opponents and other schools from all over and have sent cards and other well wishes, and at Tuesday’s Quarterfinal at North Branch, Frankenmuth fans hung a sign amid those supporting their team that read “Muth Prays 4 Knuth.”

Michaelis keeps Knuth updated frequently, either directly or through messages to his son. Levandowski and other former players are among those who have come in to lend an extra hand at practices. The team is watching videos of Marysville’s MHSAA championship teams to see the level of intensity and focus necessary to accomplish the same.

Booms said the players have focused on playing with maturity and accepting little mistakes in order to move on and improve. That in turn might’ve helped them deal with this much larger dose of adversity.

And after Tuesday’s Quarterfinal win, they heard Knuth’s voice again – sort of, through Michaelis. She texted Knuth that the Vikings had advanced to Finals weekend, then relayed to her players his message telling them how proud they’d made him.

“As soon as it happened, we knew we had to work harder,” Booms said of Oct. 1. “This was going to make or break out season, but we were going to make our season. … We weren’t expected to make it this far. But the fact is we all wanted it, and we all believed in ourselves.

PHOTOS
(TOP) One goal: Marysville's volleyball player join together before the start of Tuesday's Quarterfinal match against  Frankenmuth at North Branch.
(MIDDLE) 4 Knuth: A sign hung by Frankenmuth fans showed their support for Marysville co-coach John Knuth.
(BELOW) Champions: Marysville claimed last week's Regional title and will make its first Semifinal appearance tonight since 2006.
(Top and below photos courtesy of Dusty Johnson.)