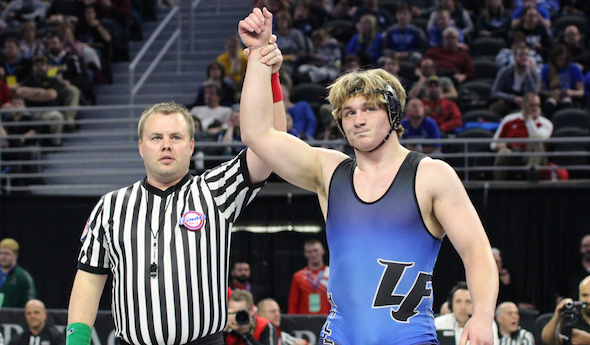 AUBURN HILLS – Trent Hillger was as impressive as ever during his run to his third straight MHSAA individual title.

The Lake Fenton senior heavyweight pinned his first three opponents at the Division 3 Finals at The Palace of Auburn Hills this past weekend, then beat Lake Odessa Lakewood's Luke Tromp by technical fall in the Final, 15-0, to end his season with a 59-0 record.

"I was feeling good," Hillger said. "I felt prepared coming into the tournament. My coaches prepared me well, I came in and wrestled like I have all season. You see upsets left and right, you always have to go into the match like he can beat you, like he is the number one guy in the state. You always have to wrestle aggressive, wrestle your style of match and that’s what I did and came out on top."

There would be no upset here, as now Hillger gets prepared to take his talents to the Big Ten and the University of Wisconsin.

Competing in a Final can make a wrestler an emotional wreck, especially a freshman taking his sport's biggest stage in high school.

But Flint Powers ninth grader Spidle took his coach's advice and turned that into a 7-3 win over Ida's Assenmacher.

"Everything I've worked for has paid off," Spidle said. "My coaches told me to stay aggressive, stay calm and stick to the game plain and I'd win, and I did that."

Winning a championship in wrestling is an incredible accomplishment.

Beating a returning champion to do so takes that accomplishment to another level.

That's what Garber's Christensen did, as Gallagher won a title in 2016.

"I had dreams about winning it, but I didn’t really think I could," Christensen said. "I knew I put in all the work during the offseason. I knew I just had to trust my stuff and wrestle my match. I felt good during the match. There was one thing I was thinking the whole time: six perfect minutes of wrestling. It hasn’t really sunk in yet, but it will once I walk up those podium steps."

Greer tries to not over-think things when he is on the wrestling mat.

He just wrestles, and that seems to work, as he won his second title.

"I won my freshman year, and I was feeling really confident coming into the match this year," Greer said. "I haven't wrestled that kid in forever, so I didn't really know what he would do. But I don't really think when I'm out there; it's just natural, I just do it."

Young became a first Saturday night. He is the first champion crowned from Clare High School.

Young relied on quickness and athleticism for the victory.

"I can’t even describe it," Young said. "To win a state title and to be the first from Clare to win a state title, it's amazing. I thought it would only be a one-point match, going in. I was a little nervous before the match, but I've seen him wrestle before, and I knew he was bigger than me."

Sometimes watching a teammate fall short of his dreams can inspire another to keep going.

That's what Trombley did when he watched teammate Corcoran lose in the championship match before his.

That helped motivate Trombley to win his third straight championship and keep his dream alive of becoming a four-time champion.

"It's always been one of my goals (to win four). I just came to compete and the match went my way," Trombley said. "After Hunter got beat, I was a little mad, but he wrestled a good match. We have been practice partners all year, and he just didn't come out on top today. I came in this year with one goal, and one goal only, and that was to win a state title. I kept on working harder and harder this year, and it paid off."

Saxton is a wrestler of few words.

He likes to let his talents do his talking on the mat, and they sure did this year, as the Chippewa Hills senior capped off a perfect 58-0 record.

"I wasn’t really nervous out there. I was just ready," Saxton said. "I'm just so happy right now."

Bellaire and his Vikings teammates lost on the eighth criteria, leaving a bad wrestling taste in the mouths of all Dundee faithful.

He helped ease the pain just a bit Saturday.

"He made a mistake, and I capitalized on it," Bellaire said. "All I had to do was wrestle for six minutes, and I knew I would win.

"It feels great to make it to the top of the podium. I used the loss we took at the team state meet last week as fuel against all the other kids I wrestled this week."

Orrison didn't let an early takedown get to him. He knew if he kept working that the coaching and work he gets in his team's practice room would pay off.

"I knew I just had to out-compete him and just keep scoring," Orrison said. "Once he took me down, I knew I had to get a point back. It feels great; once I got that (chicken) wing in, I knew it was over."

Experience got the better of youth at 152 pounds, as Shoop handled Mount Morris freshman Morgan.

"It feels incredible, just knowing everything I've done in the past has paid off. It’s a feeling like no other," Shoop said. "I felt like I controlled him during the whole match."

Sterling didn't let his nerves get the best of him.

He proved that sometimes winning your second title can be tougher than earning that first championship, but was still able to do so by beating Corunna's Briggs.

Lieber felt disrespected, and he wanted to prove a point.

"I got the third seed coming into this tournament, and I wanted to prove everyone wrong," Lieber said. "I've finished second, third and second here, and last year was a devastating loss. I thought about it every day during practice, and if I was ever about to give up, I just reminded myself how bad I want that state title."

Whitman came into his high school career at Dundee with a lot of fanfare and a national ranking out of the youth ranks.

And he has lived up to his lofty billing by winning his third straight championship.

"It feels pretty good," Whitman said of his third title. "It kind of dies down at the end, but feels good. I was very confident coming into this tournament. I knew that if I wrestled well, no one would touch me. Now the only goal is winning my fourth state title next year."

Two titles are good, even if three would have felt better to Millington senior Roehl.

"I had a big chip on my shoulder, because I lost by one point last year, and trained all offseason for this match," Roehl said.

And the hard work paid off, as he controlled his match with Marino throughout and walked away with that second championship to cap an accomplished career.

"It feels amazing to redeem a loss from the Finals last year," Roehl said.

PHOTO: Lake Fenton’s Trent Hillger has his arm raised for the third time at the MHSAA Finals to celebrate his third championship Saturday. (Click for more from HighSchoolSportsScene.com.)