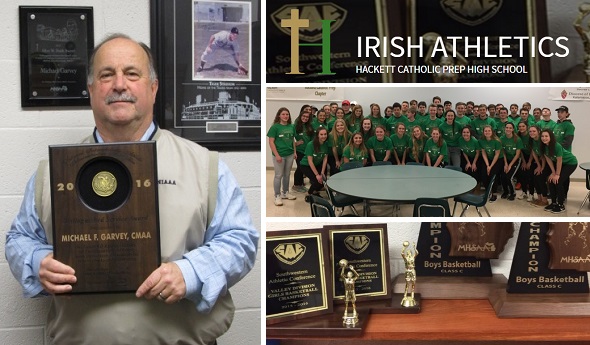 As unorthodox as that was, it set the foundation for his life’s work as a director of athletics, currently at Kalamazoo Hackett Catholic Prep.

For his work in high school athletics, Garvey has a collection of honors and awards, including his latest: a 2016 National Interscholastic Athletic Administrators Association Distinguished Service Award, presented at the national banquet in Nashville, Tenn., in December.

“It was pretty neat,” said Garvey, who prefers talking about his coaches and athletes instead of himself.

“I don’t have a job; I have a mission and my mission is to serve the kids, which is really why this one means so much to me, because it’s a distinguished service award.”

The award, based on service to the NIAAA and interscholastic athletics at the local, state and national levels, followed his 2015 Allen W. Bush Award from the MHSAA for “giving and serving without a lot of attention,” he said. “Mr. Quiet and Humble,” he added with a laugh.

“While Mike’s first priority is at his school and the students there, he involves himself in league, state and national organizations, sharing his knowledge and experience with others so they can become better at what they do,” said Gary Ellis, athletic director at Allegan High School for 17 years before retiring in 2013.

“His willingness to mentor others has had a positive effect on many districts within his conference and throughout the state.”

“The great thing about Mike is that he is focused on the kids first,” Brown said. “As a coach, we put kids first. It puts us on the same page immediately.

“It’s that relationship building he has, even with his coaches. I look at him as a mentor for me. He’s very, very open and is willing to help you grow. He pushes you to do that, too.”

With none of 27 varsity head coaches working in the building, Garvey has an interesting dynamic, keeping in touch with them through emails or phone calls when they are not on campus.

“We have an awesome staff here, and that makes my life easier,” Garvey said. “Our head coaches own their programs. I tell them, ‘If I wanted to be the head coach in your sport, I would have hired me. So go run it.’ I think they like that.”

Garvey recently finished his term as the liaison between the state and national associations, and he is MIAAA coordinator for leadership training.

At the national level, he teaches “Coaching for Character,” starting each class with a quip: “‘I thought this class was characters in coaching.”

Garvey was instrumental in starting two initiatives for athletes at Hackett: The Captains Clinic and, this year, an award called Scholar Athletic of Distinction.

He instituted the clinic because with no varsity head coaches in the building, “I felt like throughout my career, I watched coaches and their captains but it really didn’t mean anything,” he said.

“You’re the most popular kid, and you’re going to get one of those little captain’s bars at the end of the season. That wasn’t good enough.”

The clinic is a three-hour session and this year totaled 57 athletes. Any captains who do not attend lose that status.

“This year, we talked about what it means to be a good teammate,” he said. “They appreciated the pizza at the end. Free T-shirt and pizza; I got kids right there.”

Sophomore Natalie Toweson not only attended the clinic but helped design the T-shirts.

“His big thing is quotes,” Toweson said of Garvey. “I think I learned a lot from seeing other leaders and what they take out of certain situations. He has senior captains come in and share their experiences and how you can follow their lead because they’re really big role models to the underclassmen.

“Mr. Garvey brings a lot of energy and experience. He gives us new experiences, like playing Class A schools we’ve never played before, but is also very supportive and is at every game he can be.”

For the scholar-athlete award, Garvey has a rubric where athletes get points for years on freshman, junior varsity and varsity teams; bonus points for extra service hours, a higher GPA, all-conference, serving as captains and captains clinics attended.

Long way back to Michigan

Growing up in Detroit, Garvey attended Catholic schools, but during his first month as a freshman at Birmingham Brother Rice, his father was transferred to Geneva, Switzerland, for his work with Chrysler.

Mike’s sophomore year, his dad was transferred to the office in London, where Garvey honed his athletic skills.

“I was in an American school, so we did have sports,” he said. “In Europe the school sports aren’t that big because the parents don’t think they’re that good, so we competed with other American schools, which meant that for tournaments or competitions, we’d go to what used to be West Germany.

“We’d go to Belgium; we would go to France. It was really cool. When I moved back at the end of that last year, I had been in way more countries than I had been in states.”

Garvey competed in soccer, rugby, wrestling, baseball and swimming, which “was not my best sport,” he quickly added. “I just kind of had a jock heart and loved sports.”

After high school, he spent the next year in Europe and finally decided he had to choose a career.

“My two options in my brain were teach PE (physical education) and coach or be a dentist,” he said. “Vastly different. The year after I graduated, I stayed to help my previous coaches in London, and I was sold.”

After graduating from Western Michigan University, Garvey took a job in Illinois where he taught four hours of French, a language he learned while in Switzerland, and two hours of religion. 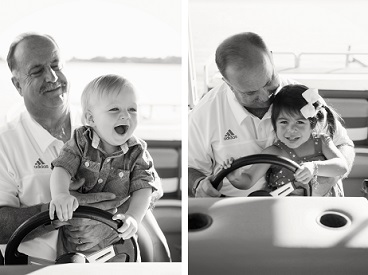 He was also head coach of wrestling and baseball and a football assistant coach.

Four years later, he moved back to Michigan, teaching at Lawton High School. That led to his first job as director of athletics, spanning his last five years there.

Garvey went from Lawton to Delton Kellogg, where he spent seven years as AD.

“I really felt like I grew there because I was away from my comfort zone,” he said. “It was stand up and be the guy. That’s where I got real involved with the state AD association.”

“I got to be involved in the building process,” Garvey said. “I loved Otsego and the people I worked with, and I worked with an awesome principal (Herve Dardis).

“I was involved in all the building stuff: the stadium, the ball fields, the tennis courts, the building. It was really fun.”

In 2010, Garvey had the opportunity to return to his Catholic roots when the AD position became available at Hackett.

“I went through the interview process, and I decided I had to come home,” he said. “My kids (Erin and Kristy) went here and I knew 20 years ago I was going to finish at a Catholic school.”

As conflicted as he was at making the choice, Garvey knew he made the correct one.

“It was really hard to leave Otsego because as an administrative team we had put together the facilities, which were outstanding.

And he remains up to the two toughest challenges in his work leading Hackett’s athletic department.

“No. 1, keep all our programs strong because we don’t have that many kids, yet we offer a crazy number of opportunities for them,” he said. “To keep those programs viable, we need bodies.

“The other hard part is I’m married to my best friend (Jennifer) and it keeps me away from her.  When this becomes a job, then I’m done.”