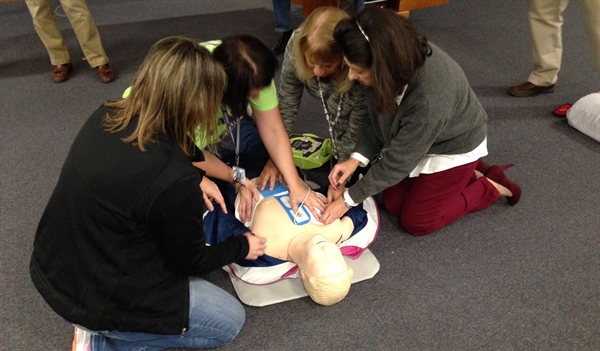 Without a doubt, questions will enter the minds of many as they attend AED or CPR training sessions, or MHSAA Coaches Advancement Program courses on health and safety:

“Will I ever need any of this?”

“Is this worth my time?”

The answer to the first question is, “Hopefully not.” The answer to the second musing lies in the stories that follow, excerpted from a small sampling of countless situations occurring in school buildings on a regular basis. These had happy endings, thanks to trained, educated individuals who knew how to react. The MHSAA’s mandate for CPR certification in 2015-16 aims to put more school sports personnel into that position.

Roughly 30 months after the tragic death of Wes Leonard, a Fennville High School basketball player who collapsed moments after his shot capped a perfect regular season in 2011, his mother Jocelyn helped to save the life of another Fennville student.

Thanks in large part to her efforts to promote greater presence of Automatic External Defibrillators (AEDs) in high schools across Michigan, and to provide training for such circumstances as the one in which she lost her son, Jocelyn was prepared for such a moment in the school where she serves as a choir teacher.

In October 2013 a Fennville High student collapsed in the middle of a math class prompting an alert being sent to Leonard, who rushed down the hall to the classroom and began CPR. She activated the AED that had been retrieved from the school’s office and used it on the boy, who was resuscitated as emergency responders arrived on the scene.

The Leonard family continues to campaign for mandatory advanced CPR training and practice in schools across the state through the Wes Leonard Heart Foundation, and more can be found by clicking here.

Chess can be a mentally exhausting game. Thinking of your opponent’s moves and the counter moves you can make, often anticipating many moves into the future, can be stressful and draining. Luckily, Andrew Wilson, a sophomore member of the Streamwood (Illinois) High School chess team, used that quick thinking to save a 7-year-old girl’s life in February.

Wilson had just finished a long four-game day at the Illinois High School Association (IHSA) state chess tournament in Peoria, Ill., and was eating dinner with a friend when they heard screams coming from the pool area at the hotel where the team was staying. Initially thinking nothing of it, Wilson and his friend continued eating before the reason for the screaming became known.

“We both agreed it was probably just a bunch of kids playing in the pool,” Wilson said. “After a while, a man came in and said that some girl had a seizure and asked if anyone in the lobby knew CPR.

Wilson had become certified in CPR less than a year ago as part of the Elgin Explorers Group, which is conducted by the Elgin Police Department for teenagers interested in pursuing a career in law enforcement. There, Wilson learned about being a police officer, just like his father who is on the Elgin Police Force.

“I didn’t expect to have to use [the certification] at all,” Wilson said. “I remember during training, I said, ‘I don’t understand why I’m going to need this.’”

The rest of the weekend in Peoria was uneventful, even with three more chess matches the next day, Wilson said. The Streamwood chess team didn’t win the tournament, but they brought home a hero.

Wilson was recognized at a ceremony in March, where he received a proclamation from Illinois Senator Michael Noland and an award from the police department. Both he and his chess coach, Pat Hanley, won awards from the U46 School District at the ceremony as well.

“While you may not have won the chess tournament, you’re definitely a winner in our eyes,” Board Member Traci O’Neal Ellis said while presenting the certificates of achievement.

(Below by Juli Doshan for NFHS.org)