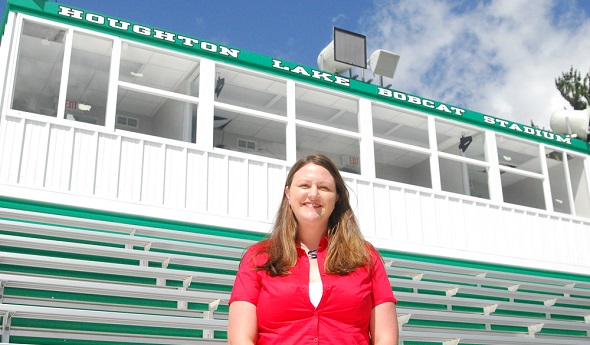 To a generation of sports fans, Lake Placid, NY, will always conjure images of the “Miracle on Ice” orchestrated by the 1980 US Olympic Hockey Team and the voice of Al Michaels counting down the seconds and asking, “Do you believe in miracles?”

Maureen Whidden grew up a sports fan in a sports household. She, too, has a memory of Lake Placid, but it’s unlike those of most other people in the world, let alone this country.

“Right from college I went to Lake Placid, NY, and was an intern for the Olympic Training Center, working operations and events,” she said. “I got to go down the bobsled run, which was awesome. We started from about halfway up and I clocked about 45 miles per hour. It was just cool.”

Now beginning her fourth year as athletic director at Houghton Lake High School, Whidden maintains a pace which on most days during the school year must feel like twice her speed down the icy track in Lake Placid.

A self-proclaimed gym rat, she wouldn’t have it any other way. Her father, Rick Radulski, was the varsity boys basketball coach at Utica High School. When she was not in the gym, she was, “watching game film with the guys. That’s how I grew up.”

After earning a master’s degree in sport administration from Central Michigan University, it was off to Lake Placid, and on the fast track – literally – to launching her career.

The unexpected bobsled run opened Whidden’s eyes in more ways than the obvious thrill of the moment.

“It was my introduction to non-traditional sports such as luge, skeleton; just awesome sports. Those athletes are so strong. Real power and strength athletes,” Whidden said.

Following her internship, Whidden was hired by USA Taekwondo in Colorado Springs, where she worked for a year and a half while in the process being exposed to yet another sport.

Though vastly different than the sports she followed growing up, she could easily see a common thread in the people who participated.

“All athletes have the same goals and the same values; the same drive,” Whidden said. “Not all of them get the same publicity. Taekwondo, for instance, didn’t get the publicity that basketball or soccer got.”

It was that type of experience that helped in her transition to heading up a high school program of 15 sports, a couple of which were in their infancy for the 2012-13 school year. Whidden called upon her USOC experience as she welcomed bowling and cross country to Houghton Lake.

“Bringing new students into the athletic world, or exposing others to a new sport, really opened my eyes,” Whidden said. “On the bowling team we have 12 kids who may have never played another sport in their lives, and they just went to the Regionals. It’s not just mainstream sports – football, basketball, baseball – that can succeed .”

The two additional sports were a welcome addition to Whidden’s workload, at a school where 23 percent of the student body participates in at least one sport, and only 11.5 percent suit up in two different uniforms.

She wishes the numbers were higher, but several factors are at play for the Class B school of 468 students in one of Michigan’s prime resort towns – with the economy and funding posing the highest hurdles.

“We’re one of the poorest counties in the state of Michigan, based on average income,” Whidden said. “Our student count has dropped in recent years. People come here during peak seasons and support our businesses, and that’s great, but people aren’t moving here.”

Some, in fact, are moving away, which has left Whidden looking for football and boys basketball coaches in each of her three years.

Yet, if there’s one thing clear when meeting Whidden, the challenge is not too daunting. It is worth noting that the recent additions of bowling and cross country came to fruition through old school dedication and heart; the programs are self-funded, and the coaches are not paid.

Whidden knows all about paying dues. This is just her first year as a fulltime staffer at the high school, after starting as a half-time employee and then moving to three-quarters-time.

“Our community support has been the most amazing aspect of this job,” Whidden said. “We don’t have the budget to pay our event workers: ticket takers, announcers, scorebook ... anybody. But, I’m never scrambling to find workers. That’s amazing to me.”

Whidden often brings extra “volunteers” along – twin 5-year-olds, Troy and Blake – to afford them the same opportunities she had as a child and start them down the right track.

This is the third installment of a series, "Career Paths," focusing on the unsung contributions of athletic directors. See below for earlier installments.