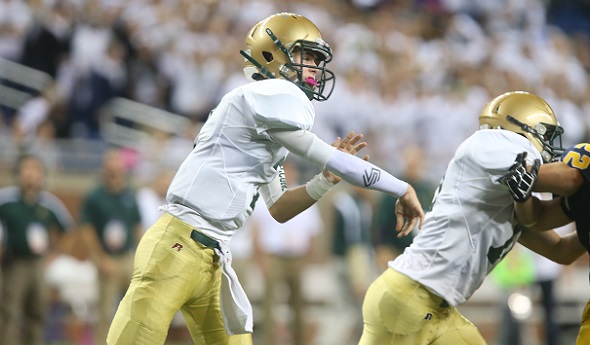 As we embark on another sports-filled school year Monday, we can look to a recent Monroe St. Mary Catholic Central grad for the value of a school year filled with sports.

As specialization at the highs school level continues to be debated, Bryce Windham will start his college baseball career this fall at Division I Old Dominion University – after playing baseball but also football and basketball for the Falcons.

The MHSAA has long advocated athletes taking on as many sports as they have interest instead of focusing on just one in pursuit of a college scholarship – a position that’s received plenty of public backing of late, be it from stars of the U.S. women’s soccer team after their World Cup championship run or former Lansing Waverly multi-sport athlete John Smoltz during his enshrinement in the Major League Baseball Hall of Fame.

Enter Windham – who easily could’ve been excused for focusing on baseball, or even basketball as his dad is the St. Mary’s varsity boys coach. Instead, Bryce quarterbacked the football team to last season’s Division 6 championship – breaking Ithaca’s national-best 69-game winning streak in the Final – before being named Class C Player of the Year by The Associated Press in basketball and earning a Most Valuable Player honor at the baseball state coaches association all-star game at Comerica Park this spring.

All three of Windham's teams reached at least the MHSAA Quarterfinals.

“His participation in football and basketball helped land a Division 1 baseball scholarship to Old Dominion. They were able to see his athleticism in basketball and toughness in football, and ODU’s coach loved it,” dad and hoops coach Randy Windham said.

“He probably would’ve given up football, and that ended up his greatest memory by winning a state championship.”

Click to read about Windham’s multitude of accomplishments as reported last month by the Monroe Evening News.

National coaching honors were bestowed on a trio of Michigan coaches over the summer:

Fremont and the high school athletic community statewide mourned the death July 21 of longtime coach Rich Tompkins, who led Fremont’s boys cross country teams to six MHSAA cross country championships including three and a runner-up finish during his last decade of coaching before retiring in 1997.

The Muskegon Chronicle reported that his boys and girls cross country teams and boys track and field team combined for 45 league championships, with his boys cross country team winning 116 straight duals from 1977-88. Tompkins was executive director of the Michigan High School Coaches Association for more than a decade and served on its board for more than two decades.

Click to read more from the Chronicle on Tompkins’ legacy.

Officials in the News

The Monroe County Officials Association took to the county fair to encourage passers-by to “Be the Referee” – and received 47 sign-ups from people interested in the avocation. Visitors to an MCOA booth at the fair were told in some detail what is involved with being an MHSAA official, and those who then signed up to find out more about officiating football, basketball, baseball or softball (sports the MCOA trains for and schedules) will be invited to an orientation session where they will become eligible for one of 20 complimentary registration fees for this school year. 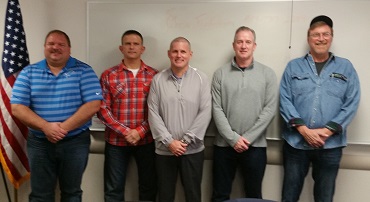 The West Michigan Officials Association marked a decade of support at the start of this summer for the Visually Impaired Sports and Activity Day, sponsored by the Helen DeVos Children’s Foundation. The WMOA has contributed nearly $18,000 to the event over the last 10 years as well as taking part in the event, which includes a number of sports and other activities.

The Saginaw Athletic Officials Association sent along this photo of five members who worked 2013-14 MHSAA Finals, from left: Mark Jarlock (baseball), Tom Behmlander (softball), Scott Helmka (football), Dale Brown (softball and football) and Mark Schoenow (football). The Baseball Final was Jarlock’s first; the other officials had worked Finals in the past.