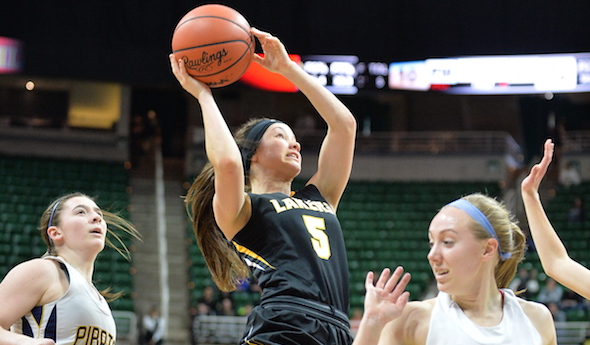 The first day of the MHSAA Girls Basketball Finals at the Breslin Center in East Lansing produced three first-time finalists in the Class C and D fields for Saturday's championship games.

Edison Scores On A Steal - Detroit Edison scored the first 11 points of this Semifinal, with Gabrielle Elliott capping the run on this play. Elliott had 24 points in the game.

Hawks On A Run - Aryana Naylor led Flint Hamady with 10 points and 10 rebounds against Detroit Edison, including this fastbreak basket in the third quarter.

Lakers Out to Early Lead - Maple City Glen Lake led throughout the first half in its Class C Semifinal with Pewamo-Westphalia. The Lakers got a three-point play along the way from Allie Bonzelet.

Spitzley Leads Pirates - Pewamo-Westphalia pulled away in the fourth quarter against Maple City Glen Lake in the second Class C Semifinal. Emily Spitzley had a double-double for the winners with 24 points and 12 rebounds.

Panko Paces Cardinals - Saginaw Michigan Lutheran Seminary led by as many as 13 points in the fourth quarter against Engadine. Rylee Pankow makes it 62-49 with this jumper.

Vaughn Goes Coast-To-Coast - Engadine led late in the first half against Saginaw Michigan Lutheran Seminary in Class D. Olivia Vaughn gives the Eagles the lead driving the length of the floor for a basket.

First Class Scout - Scout Nelson scores on a putback for Mt. Pleasant Sacred Heart in the second quarter against Pittsford. Nelson led the Irish with 16 points.

Clark Down The Lane - Maddie Clark led Pittsford with 19 points and eight rebounds against Mt. Pleasant Sacred Heart, with two points off this power move to the basket in the third quarter.