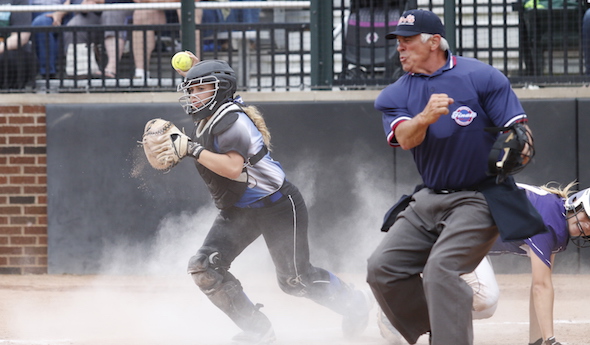 Click the headings below for highlights from all four Semifinals broadcasts on MHSAA.tv.

Kestrel Chalk Chaser Monroe St. Mary Catholic Central scored four runs in the first inning against Pinconning, the first plated by this double down the third base line by Julianne Venier.

Sobeski Drives In Two More Skyler Sobeski helps her own cause in the Bronson fifth inning by driving in two runs with a two-out single.

Lemmer Plays Long Ball Aliyah Lemmer of Kalamazoo Christian gets the Comets started with a double in the gap to drive in two runs against Hillman.

Rozeveld Triples Two Home Kalamazoo Christian put the game away with seven runs in the fourth inning, the last two on this triple off the fence by Jill Rozeveld.

Tigers Score Hillman picked up two runs in the fifth inning when Eden Hunt tripled to center and then scored on an errant throw on the same play.

Patriots Go Up Erica Treiber delivers the first run of the game for Unionville-Sebewaing on a single.

Two-Out Double Delivers Kayla Gremel knocks a two-out double to the fence to give Unionville-Sebewaing a 3-0 lead.

Stone Triples For Holton Jackie Stone gets Holton on the board in the sixth inning with a triple down the right field line.

8. GIRLS BASKETBALL Durand ran its winning streak to seven with a 37-32 victory over Webberville – Owosso Argus-Press