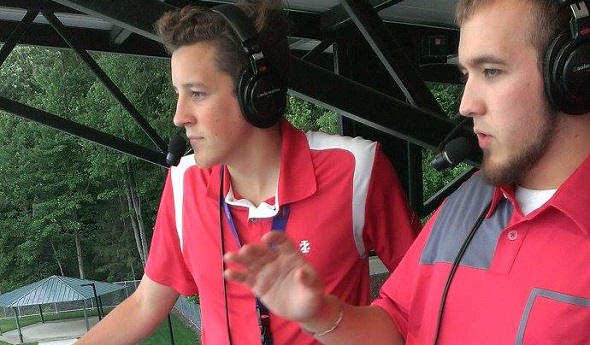 For the second straight year, James Kitts, the coordinator of the School Broadcast Program at Montrose, was a finalist in the Teacher of the Year category.

Just last week, Montrose was named the “Program of the Year” in the MHSAA’s School Broadcast Program Excellence Awards for 2016-17, claiming the top honor for the fourth straight year.  Montrose took first place in four categories.

Vandefifer also was honored recently by the Michigan Interscholastic Press Association as the top Student Broadcaster in Division 3. Vandefifer and his broadcast partner David Sackrider placed second in the Play-By-Play Category in the MHSAA SBP awards and first in the Michigan Association of Broadcasters Foundation Sports Announcing Team category this year.

In its eighth year, the School Broadcast Program gives members an opportunity to showcase excellence in their schools by creating video programming of athletic and non-athletic events, with students gaining skills in announcing, camera operation, directing/producing and graphics.

The program also gives schools the opportunity to raise money through advertising and viewing subscriptions.

All sporting events – live or delayed – are available on a subscription basis only for their first 72 hours online. They become available for free, on-demand viewing approximately 72 hours following their completion.

Be sure to check the Upcoming Events page at MHSAA.tv for schedule additions every day.

The NFHS Network has announced new pricing for 2016-17, eliminating the Day Pass and lowering the cost of a Month Pass to $9.95. Subscribers will have access to all live video and streaming statistics across the country. All content becomes available for free, on-demand viewing 72 hours after being shown live. A portion of every subscription sold by a school goes to benefit its program.

A complete list of participating schools can be found on the School Broadcast Program page of the MHSAA website.