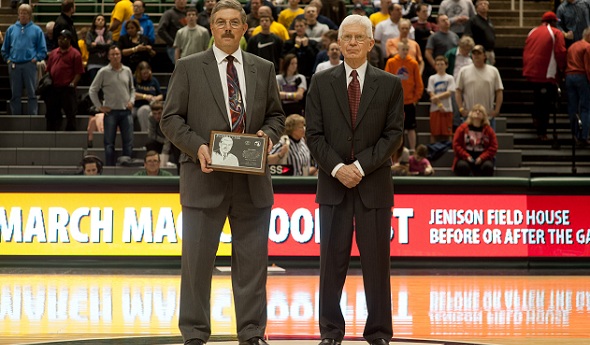 By the time Charles Schwedler joined the Bullock Creek school district nearly 19 years ago, Bill Mick had moved on to other educational roles in the Midland area.

The only connection they shared was an interest in the success of Bullock Creek’s students.

“Bill has always been just a phone call away for anything that I have needed from the day I arrived in Bullock Creek,” Schwedler wrote in his letter of recommendation for this year’s MHSAA Charles B. Forsythe Award. “That may not sound all that unusual except for the fact that he really has never had a reason to help me. … Bill intuitively knew that if I succeeded, kids would have a better shot at succeeding. No hidden agenda; just what’s best for kids.”

For more than four decades, Mick contributed to high school athletics as a coach, administrator and then mentor to those who followed him in those roles. That drive, which has continued after Mick’s official retirement from education, made him this year’s recipient of the MHSAA’s highest honor.

The Forsythe Award is in its 35th year and is named after former MHSAA Executive Director Charles E. Forsythe, the Association's first full-time and longest-serving chief executive. Forsythe Award recipients are selected each year by the MHSAA Representative Council, based on an individual's outstanding contribution to the interscholastic athletics community. Mick received the award during halftime of Saturday’s Class B Boys Basketball Final at Michigan State’s Breslin Center.

“I think it’s just being around athletic directors, particularly the new or younger athletic directors, that keeps the juices flowing, so to speak,” Mick said. “It goes both ways. I think I have experiences I can share with people that can help them. And it sounds trite, but it’s the truth: Their enthusiasm makes them flow faster.”

Mick began his career at Bullock Creek Public Schools from 1963-76, first as a science and physical education teacher and later as a counselor and Guidance Department head. He then moved to Midland Public Schools, serving as a counselor at Midland High and then Counseling Department Head at Midland Dow until becoming the district’s Coordinator of Health, Physical Education and Athletics from 1985-97. Mick finished his educational career as a part-time counselor at Midland’s Windover High School from 1997-2002 and then again at Bullock Creek High School from 2002-03.

Among his various contributions to athletics, Mick served on the MHSAA Representative Council for three years and in a number of roles with the Michigan Interscholastic Athletic Administrators Association (MIAAA) over 24 years. He coached cross country, track, football and basketball, and has served as an instructor in the MHSAA Coaches Advancement Program.

He remains part of the committee that organizes the MIAAA’s annual statewide conference, and also makes a trip to the MHSAA office once a year to assist in a conference for new athletic directors. He passes on lessons from the challenges he's faced over the years, with an eye on new ones that continue to crop up.

“The whole electronic media thing, things happen so much quicker. There is so much more with the Internet, and that’s probably the biggest change I can see since I got started,” Mick said. “(And) the role of the AD now is so much more complex, and we don’t see as many fulltime ADs. They have other responsibilities and obligations, so much on their plates – probably more than we had on our plates when we were ADs.”

Mick has received multiple honors from the MIAAA, including the State Award of Merit in 2002 and Distinguished Service Award in 2008. He also received the MHSAA’s Al Bush Award in 1998 for his many contributions to the association, and the Midland Area Community Foundation’s Lloyd Osborn Award in 1997 for his service to youth and athletics in that community. He was inducted into the Midland County Sports Hall of Fame in 1998.

Mick also was an MHSAA Track Finals meet manager for three years and served as executive secretary of the Mid-Michigan B league for five.

“Bill Mick contributed to high school athletics in a number of mentorship capacities during his career, and he remained engaged in that service after his retirement,” said MHSAA Executive Director John E. “Jack” Roberts. “Through his work with the MHSAA and MIAAA, Bill has provided valuable training to the next generation of leaders. We’re proud to honor Bill Mick with the Forsythe Award.”

His father and brothers all were superintendents and his mother was a teacher. His wife Mary Lou was an elementary school counselor for Midland Schools, and together they still attend a number of Battle Creek basketball games – where they now watch the children of those they taught, counseled and mentored.

They have two sons who are both doctors, one living in California and the other in Maine.

Past recipients of the Charles E. Forsythe Award are: