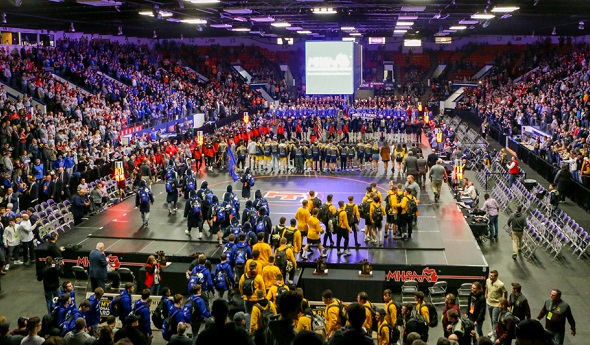 Earlier this week, Mike Garvey told his wife she can't let him quit all that he does to contribute to school sports across the state of Michigan, even if he is officially "retired."

But after 40 years serving in a variety of roles, he really doesn't have plans to stop. And she wasn't intending to make that request.

"I married the best girl in the world," Garvey said, "and she’s supportive and urges me to do the stuff that I enjoy."

And that has stretched over tenures at four Michigan high schools, serving as a teacher, coach and administrator, and continuing today in various roles at the local and statewide levels.

To celebrate his devotion and many contributions, Garvey has been named the 2020 recipient of the Michigan High School Athletic Association’s Charles E. Forsythe Award.

The annual award is in its 43rd year and named after former MHSAA Executive Director Charles E. Forsythe, the Association's first full-time and longest-serving chief executive. Forsythe Award recipients are selected each year by the MHSAA Representative Council, based on an individual's outstanding contributions to the interscholastic athletics community.

Garvey, who grew up mostly in Detroit, began his educational career in 1980 teaching at Marian Central Catholic in Woodstock, Ill., before returning to Michigan in 1985 to teach at Lawton High School. While at Lawton, he helped the Blue Devils’ wrestling program continue a dominating run as an assistant coach on Lower Peninsula Class D championship teams in 1986 and 1987 and runner-up teams in 1988 and 1989, and then as head coach of the 1990 Class D title winner. He also served as athletic director at Lawton from 1994-99 before leaving for the same position at Delton Kellogg, where he served from 1999-2006. Garvey then was athletic director at Otsego from 2006-10, and he then served as athletic director at Kalamazoo Hackett Catholic Prep from 2010-18.

He earned a number of accolades during his time as a coach and administrator, including the MHSAA’s Allen W. Bush Award in 2015 for his many contributions to educational athletics that often went unsung despite their great importance. Garvey also has been a registered MHSAA official for 35 years, in softball for all 35 and for a mix of seasons in baseball, basketball, volleyball, wrestling and track & field. He continues to instruct as part of the MHSAA’s Coaches Advancement Program (CAP) and has served as tournament manager for the MHSAA Team Wrestling Finals since their 2018 move to Wings Event Center in Kalamazoo.

“I never looked at my jobs as jobs. I always looked at it as I had a mission and was trying to complete a mission,” said Garvey, who continues to reside in Lawton. “I think I can still help people, so maybe my mission isn’t complete.

“It’s a blast. I just feel like it’s a chance to give. Schools and athletics and everything have given so much to me. Plus the human interaction – working with kids and coaches and officials, it just fits me and I enjoy it.”

Garvey remains an active member of both the MIAAA and NIAAA and the Michigan Wrestling Coaches Association. He remains on the faculty for the NIAAA’s Leadership Training Institute and has served as Michigan’s coordinator for the program. He’s been a long-serving member of the MHSAA’s Wrestling Committee and hosted more than 75 tournament events while an athletic director. He served as co-commissioner of the former Kalamazoo Valley Association and currently is the executive secretary of the Southwestern Michigan Athletic Conference.

“Even in ‘retirement,’ Mike Garvey continues to serve students, coaches and administrators with enthusiasm,” MHSAA Executive Director Mark Uyl said. “He continues to pass on to our current coaches the best practices he’s learned over decades, and he has played a sizable role in making the Team Wrestling Finals a record-setting event for attendance the last few seasons. His brings a genuine enjoyment to these activities, and we’re fortunate to have him continuing to take leading roles.”

Garvey began classes at Bloomfield Hills Brother Rice as a high school freshman, but after less than a month moved overseas as the family followed his father’s job with Chrysler. Garvey matriculated in Geneva, Switzerland, and then completed high school at The American School in London, England. Once back in the United States, Garvey earned bachelor’s and master’s degrees from Western Michigan University. He remains active in community service through his church and lake association.