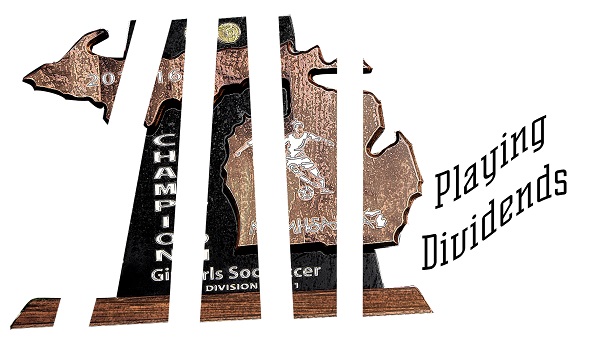 This is the second part in a series on MHSAA tournament classification, past and present, that will be published over the next two weeks. This series originally ran in this spring's edition of MHSAA benchmarks.

High school tournament classifications went viral before there was social media and most of us knew what “viral” meant.

Much as a virus infects computers today or has created epidemics of disease around the world for centuries, high school tournament classification – once introduced – tends to spread uncontrollably. Once started, it tends to keep expanding and rarely contracts.

While we are still some distance from providing every team a trophy as a result of expanding high school tournament classification across the country, there is criticism nevertheless that we are headed in that direction – a philosophy which is supposed to exist only in local youth sports for our youngest children.

Michigan could be blamed for all this. Michigan is generally accepted as the first state to provide different classifications for season-ending tournaments for different sized schools. It started a century ago. Today, every state has various classifications for its tournaments in most if not all sports. And it is a bit ironic that Michigan – creator of the classification chaos – more than most other states has kept the number of tournament classes or divisions under control.

Yes, there is evidence that tournament classifications have expanded over the years in Michigan, especially with the relatively recent introduction of tournaments in football and the late 1990s’ move from classes to divisions in most MHSAA tournaments. But the MHSAA Representative Council has held true to its word when it expanded the playoffs for football from four classes to eight divisions: this is needed because of unique factors of football, factors that exist in no other sport; and all other sports should be capped at a maximum of four classes or divisions.

Kentucky is the preeminent defender of single-class basketball. All of its 276 high schools compete for the single state championship for each gender. In Indiana, there are still open wounds from its move in 1998 from one to four classes for its 400 schools in basketball.

While there is considerable evidence that state tournaments do as much bad as good for educational athletics, state associations persist in providing postseason tournaments because, on balance, the experiences are supposed to be good for student-athletes. And once we reach that conclusion it is just a small leap to believe that if the tournaments are good for a few, they must be better for more – which leads to creating more and more tournament classifications. One becomes two classes, then three, then four and so forth.

While the argument is that more classifications or divisions provides more students with opportunities to compete and win, it is undeniable that the experience changes as the number of tournament classifications expands. It is not possible for state associations to provide the same level of support when tournament classifications expand to multiple venues playing simultaneously. For example, there is less audio and video broadcast potential at each venue, and less media coverage to each venue. Focus is diluted and fans diminished at each championship.

No one can argue reasonably that today's two-day MHSAA Football Finals of eight championship games has the same pizazz as the one-day, four-games event conducted prior to 1990.

In some states the number of divisions has grown so much that it is difficult to see much difference between the many season-ending state championship games and a regular-season event in the same sport.

It is a balancing act. And Michigan has been studying that balance longer than any other state, and charting a steadier course than most.

The shift to Divisions for MHSAA Tournament play in numerous sports has added up to a greater number of champions for teams and individuals across the state. Following are the sports currently employing a divisional format, and the procedures for determining enrollment and classification.

In 23 statewide or Lower Peninsula tournaments, schools which sponsor the sport are currently divided into nearly equal divisions. They are:

Lists of schools for each division of these 23 tournaments are posted on MHSAA.com approximately April 1. Listings of schools in Upper Peninsula tournaments for their sports are also posted on MHSAA.com. The lists are based on school memberships and sports sponsorships in effect or anticipated for the following school year, as known to the MHSAA office as of a date in early March.

Schools have the option to play in any higher division in one or more sports for a minimum of two years.

The deadlines for "opt-ups" are as follows:

Subsequent to the date of these postings for these tournaments, no school will have its division raised or lowered by schools opening or closing, schools adding or dropping sports, schools exercising the option to play in a higher division, or approval or dissolution of cooperative programs.

When the same sport is conducted for boys and girls in the same season (e.g., track & field and cross country), the gender that has the most sponsoring schools controls the division breaks for both genders.