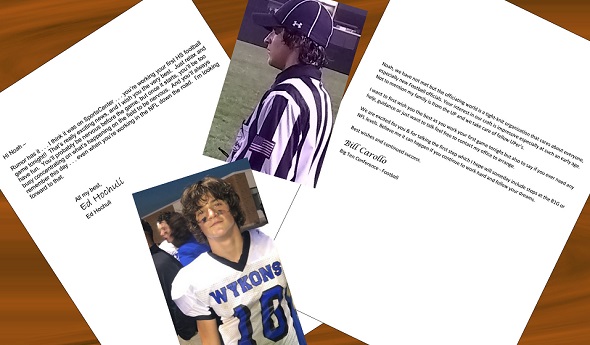 This week’s “Official” View features a Legacy official who received a couple of very cool letters of encouragement from some very important people in recognition of his first MHSAA football contest.

Noah Lewis, out of Iron River, plays wingback and cornerback for West Iron County. This past Thursday night he served as a head linesman for a subvarsity game with close monitoring from his dad from the sidelines and the rest of the crew.

However, letters from NFL veterans Ed Hochuli and Bill Carollo also provided him some unexpected sage advice. Hochuli told Noah to “Just relax and have fun,” while Carollo offered to be there for Lewis for guidance or to provide a listening ear.

Report Writing 101: Officials should be submitting incident reports whenever documenting ejections, unusual situations, or sportsmanship praises or concerns. While we certainly don’t need reports that would challenge Dickens in the writing department (we do get some of these), we do need enough detail that a clear picture is painted of the event for those administrators and directors in the Association office who are not present for the actual incident.

The who, what, where, when, and why of writing all apply. We need to know who is involved (name and number), what occurred leading up to the incident, when it occurred during the contest and why the official took the action he or she did.

Language counts … while we appreciate your discreetness when foul language occurs, please write what was said and done in detail – this includes writing out profanities in the report rather than “#^$*@^~!” or “bleeping.”

As Joe Friday would say, “Just the facts.” We don’t need any fluff or opinion. This means you don’t need to say that the play was close, that you got it right, the day was “blustery” or that “the coach was clearly out of control.” Tell us just the things we need to know to create the setting and what was said and done that led to your action.

Finally, you must complete the report within 48 hours of the end of the contest. Sooner would be better. There is nothing worse than trying to speak to a coach or administrator about an incident when we don’t even have the side of the official(s) yet.

P.S. Run your report through spell and grammar check before submitting if you have the opportunity.

CROSS COUNTRY One of the visiting coaches approaches the referee and points out to her where logs have been placed across the course to make it more challenging. This coach objects to these artificial barriers.

Ruling: These artificial barriers on the course must be removed so the course is clear of these obstructions.

FOOTBALL This week we look at the enforcement of the blindside block foul in football. It’s 3rd-and-21 on Team A’s 26-yard line. The slot receiver, #8 for white, clearly commits a blindside block in violation of the rules. With forceful contact, he blocks an opponent who does not see the blocker approaching.

One of the keys to look for in this play on the field is offensive players returning back towards the line of scrimmage. The question this week is: What is the down and distance if Team B (a) accepts (b) declines the penalty?

Last Week’s IYC Ruling: The swimmer did not make a legal turn since he took additional strokes after turning toward the breast. While swimmers may turn and independently kick or glide after their head passes the backstroke flags, they may not take any additional arm pulls other than in the actual turning action (8-2-f-1).

Here's a closer look at those notes received by Noah Lewis, the aspiring Legacy Program official from Iron River: 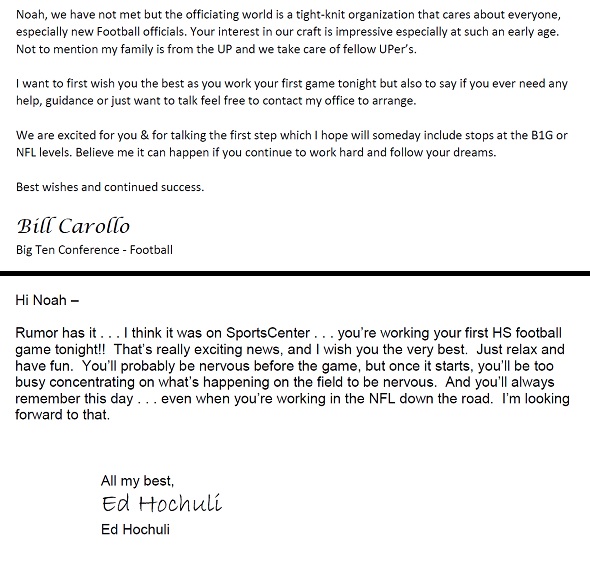