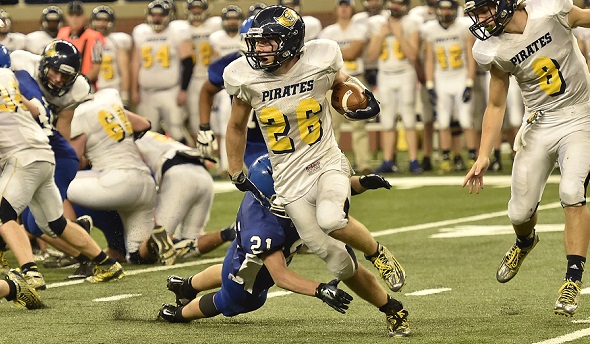 Jared Smith has a season to play for the Pewamo-Westphalia football team.

But he had an incredible season to remember as a junior last fall in literally carrying the Pirates’ offense to Ford Field.

The 6-foot, 195-pound running back also ran for more than 2,100 yards as a sophomore and should push into the career rushing leaders by the time this fall is complete – especially if P-W replicates its team finish of 2015, when it was runner-up in Division 7 after a 22-16 loss to Ishpeming in the MHSAA Final.

See below for more recent record entries for football, boys soccer, softball and volleyball, and click each sport heading to see that record book in full.

Of 186 passes Jondell Jones completed for Bangor over 28 high school games the last four seasons, 57 went for touchdowns including a high of 21 in eight games as a sophomore. Jones started the final two games of his freshman season and then through senior year last fall.

Quarterback Tony Poljan and receiver Tony Palmer played leading roles in Lansing Catholic’s combined record of 30-8 over the last three seasons and trip to the Division 5 championship game in 2014. Poljan finished his career in the fall placing in the MHSAA records with 390 completions, 682 attempts, 6,179 yards and 59 touchdowns passing over mostly three seasons as quarterback. Palmer ranked with 134 receptions, 2,036 yards and 21 touchdowns receiving over his three seasons. Poljan will play next at Central Michigan University, and Palmer has signed with Northern Michigan University. Also added for Lansing Catholic was Jack Swain for a 99-yard scoring run against Albion in 2010, and Demond Winston, Bob Fata and Brent Nakfoor for tackles for losses during seasons in the mid-1980s. Winston went on to play for Vanderbilt and then the New Orleans Saints, while Fata played collegiately at Michigan State.

Simon Roennecke was limited to only nine games in the fall for Birmingham Roeper. But he still tallied 29 goals and two assists to join the career goals list with 98 and move up the career assists (56) and points (154) lists with a season to play. His 154 career points are tied for 17th-most in MHSAA history.

Midland’s softball team made the doubles listing with 64 in 2015 on the way to a Regional title, and Maya Kipfmiller led the way with 17 doubles to make the individual record book. Kipfmiller was a sophomore last season, hitting .504 as an outfielder and first baseman and pitching to a 1.17 ERA according to a report by the Saginaw News.

Katie Kish finished a fine four-year varsity career for Grosse Pointe South last spring ranking 13th in MHSAA history with a career batting average of .547. She hit .605 as a senior, with her 66 stolen bases tying for 10th in one season, her 78 hits tying for 14th and her 208 career hits and 39 career doubles also making records lists. She’s continuing her softball career at Hillsdale College.

Coleman’s run to a Division 4 Quarterfinal last season saw the Comets score nearly 10 runs per game – 408 total, led by junior Carley Starnes’ 68. Both totals made MHSAA records lists, as did Cassidy Tucker’s seven RBI in a 20-5 win over Merrill. Coleman finished the season 33-8.

Meredith Norris bettered one of her MHSAA records and continued climbing toward a few others, while Corunna teammate Skylar Napier also put list-worthy touches on her high school career in the fall. Norris’ 56 kills against Goodrich on Nov. 7 set an MHSAA record by three over the 53 kills she had against Goodrich nearly a year to the day prior. Norris also made the single-season kills list for the third time with 836 and ranks seventh on the career kills list with 2,287 and a season to play. Napier finished on the career assists list with 2,912 over three seasons and on the single-match assists list three times including with a last-season high 52 in that Goodrich match.

South Lyon’s Hannah Barton tied for the sixth-most assists during the rally scoring era in a Nov. 10 match against Farmington Hills Mercy. She had 59 over five games, only eight shy of the record, in her team's 3-2 loss.

Saginaw Swan Valley’s run to a record 58 wins and a Class B Regional Final berth in the fall was keyed by a number of strong individual performances. Lauren Huebner made the MHSAA records with 32 kills in a three-game match against Chesaning, 813 kills for the season and 2,109 for her four-year varsity career; the single-season kills rank 15th and the career kills 10th during the rally scoring era. Senior Larissa Crook is listed with 16 aces in a match against Saginaw, 51 assists in a four-game match against Belding, and 129 aces and 1,439 assists both for one season last fall – her assists rank 11th on that list. Senior Noelle Champagne also made the single-match aces list with 15 against Saginaw.