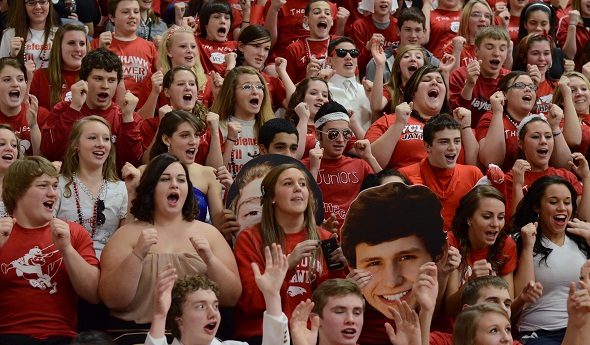 JACKSON – It’s tradition – at least symbolically – that a graduating class leaves behind lessons learned and memories they've helped make for the students who will come next. The same will be said for those graduating from Vandercook Lake this spring.

But a group of 13 who for the most part have been friends since kindergarten decided last fall they’d attempt to also pass on a legacy that already is making noise – literally – throughout the small community on the south end of Jackson.

And most of all, they’ll be able to take part in a new tradition that has made the “Nest” a Battle of the Fans II finalist this winter and symbol itself of what makes Vandercook Lake most proud.

“How close-knit we are, how much we all get along so well and everyone has fun,” senior Janessa Krueger said. “I feel like our school is good about including lots of people. Our class, we just want to leave a legacy of being the ones who started this section, and being a close-knit grade that’s really supportive.”

Vandercook Lake on Friday was the second stop on this season’s Battle of the Fans II finalists tour. The MHSAA will next visit Ann Arbor Gabriel Richard on Tuesday followed by Zeeland East on Friday. The postponement of last Thursday’s boys basketball game has pushed Buchanan’s trip to Feb. 15, and the Facebook voting that will contribute to the determination of the champion will begin a day later than previously scheduled – Feb. 19 – and end Feb. 21 with the winner then announced Feb. 22.

The Battle of the Fans played a big part in the creation of a more organized Vandercook Lake cheering effort this winter. But it wasn't the original cause.

The Jayhawks started out with the main goal of replacing the mascot costume that was stolen years before. To do so would cost $1,700. It became possible, though, because the seniors had done some significant fundraising as juniors to go with what already was in the class fund.

That got the ball rolling. But the seniors – led by that 13-member group – weren't done. 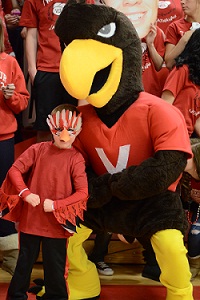 They did have some tradition from which to draw. A much less formal section was formed three seasons ago to take part in a local TV contest to pick the Jackson area’s top cheering section – and the Jayhawks finished second.

And even long before that, there was the Spirit Jug. Based on the Spirit Stick made popular by the original “Bring It On” movie, the high schoolers have long battled for the right to possess the Spirit Jug, which goes to whichever class cheers loudest during an in-school competition at the beginning of the school year (Vandercook Lake’s middle schoolers compete for a similar, but much smaller, milk jug.).

The Nest committee pushed the effort to a new level.

It’s made up of four girls and nine guys, including two basketball players and 12 athletes total. Together, they make up 15 percent of the senior class. “There isn't really anybody you don’t know. We all pretty much become friends,” Tyler Petress said, glancing toward the rest of the committee. “This is pretty much our lunch table.”

Spreading the word and sharing the work is easier with 13 people contributing. Two leaders in particular have taken on the tasks of making fliers and posters. Two more share mascot duties.

Since all are friends as well, they are comfortable sharing ideas and policing each other and the rest of the section when a chant doesn't share in the positivity the section as a whole is aspires to achieve.

“I think a lot of the planning that happens, happens outside of our meetings. ‘Oh I have a great idea; let me just text any one of you because we know each other so well,’” senior Tricia Parmalee said. “We talk to each other throughout the week, and then when we come back into the same room we at least have some idea of what’s been going on all week.”

Initiative also makes this group special. To initially get the ball rolling, half the committee met with the high school’s principal, assistant principal, athletic director and the district’s superintendent to explain desires and plans to purchase the mascot costume and spirit towels and even an idea for creating a student-only pass for games. The committee has constant dialogue with athletic director Barb Blair, who raved about the group and how it has gone about accomplishing its goals.

Of course, there have been challenges. The committee originally included others before whittling to this core group. And again, every committee member is a senior – and it’s an ongoing task to include the younger classes and make sure the legacy continues on.

The Battle of the Fans II has served as a rallying point – although that too came with some concern because Vandercook Lake is about 22 percent smaller than the next-smallest finalist.

But the Nest has simply added that to the list of worthwhile challenges that have taken on to make what they’ll leave behind so meaningful.

“Being at a smaller school, getting the recognition that we are for all of the hard work that we've done through the basketball season, to show (that work) pays off is a huge thing for our confidence,” senior Tyler Mihalatos said.

“(It shows) that maybe, even if we’re not the biggest school, this still means something.”

“For us, we’re never going to forget this stuff,” Parmalee added. “It was so fun, and it’s so fun now.”