As a student-athlete, I hear that all the time. The Upper Peninsula is a tightly-knit network in the sports world. Names, faces, and schools are heavily interconnected. And as the son of Manistique’s athletic director Rob Ryan, everything in that perspective is multiplied.

There are certainly perks to being my father’s son. At every away game I attend, I am greeted by some coach, athletic director, or other school official who already knows my name before the game even starts. Also, we have unlimited access to the gym. It is hard to stay connected to statewide sports living where I do, but having my dad as an AD helps. We always attend the MHSAA Boys Basketball Finals in East Lansing through him, and we love it. Finally, he introduced me to the MHSAA Student Advisory Council, and I am extremely thankful for that. He has more sports-related access than most people, and I benefit from that.

There also are some traits of being an AD’s son that people probably do not see if they do not have a similar relationship. I definitely am held to a higher standard, both academically and athletically, because of my father’s position in the school. This pushes me to be the best student-athlete I can be, and for that I am grateful.

But, there can also be a feeling of being overshadowed by what he does. I am my own person; I am not my father. Many times, I am identified by his achievements, not mine. If I play a good game, I’m “Rob Ryan’s son,” not “Coby Ryan.” Identity problems can be an issue as an athletic director’s child, but this motivates me more to want to be called by my own name because of who I am and what I’ve accomplished.

When I am attending or involved in an athletic competition, my peers and I do not have the same experience. They all see the players playing, a couple guys reffing, and some other people doing statistics or something; they don’t really care about the details. They are just there to watch the game.

When I go, I see things in an entirely different light. I see a team that arrived on the field or court without a hitch because my dad was there to greet them, show them where everything was, and make sure they were all settled in. I see an unbiased, professional officiating crew contracted by my father from a different community. I see scorekeepers, announcers, timers, and statisticians, all hired by him because of their knowledge of the game being played and their ability to perform the task given to them. When there are unruly fans, coaches, or players, I see people that my dad has to deal with by getting them out of the game so enjoyment is not taken away from the rest. In the student section, I am much more aware of sportsmanship and what is appropriate or inappropriate for a high school game than my peers because of him. Being his son puts a whole new perspective on how I view the game.

Through my dad, I can be much more involved in my community’s sports, even if I am not playing all of them. He taught me how to keep stats for basketball games. He had me announce JV football games. I have been a referee with him in local basketball tournaments. Also, we coached a girls basketball travel team together. These opportunities all arose from his being an athletic director.

Overall, I love being my dad’s kid. We both love high school sports and get to enjoy them in more ways than most fathers and sons ever will. I believe there are some negatives to it, but I find that in the end these actually just make me a better student-athlete and a better person. I guess I am pretty lucky to be “Rob Ryan’s son.” 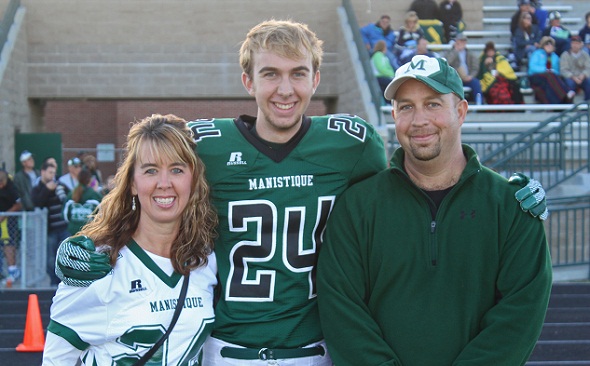