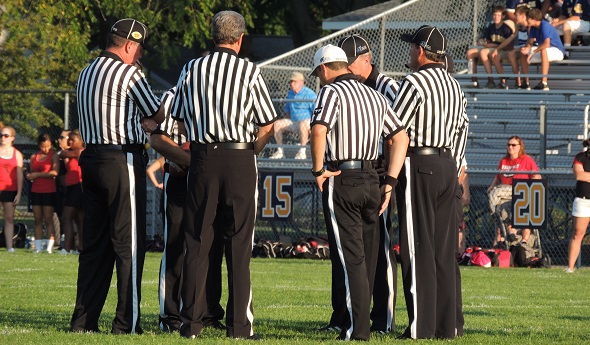 Wolma is in his third school year as athletic director at Hudsonville and previously coached basketball and golf. Below is a recent “30-second timeout” he wrote for the Hudsonville district newsletter.

We were five seconds away from one of the greatest upsets in the history of Caledonia basketball.

During the regular season, South Christian had beaten us by more than 30 points on two different occasions. The District Finals became the site for the third contest between the two schools on a warm March day.

We were able to slow them down just enough to stay within striking distance until late in the fourth quarter, when we finally took the lead for the first time. South Christian had one last chance with seven seconds left on the clock. After a timeout, they in-bounded the ball from the sideline and their player forced up a shot. I could see it was going to be short from my viewpoint, and my heart began to race with adrenaline as I could sense the impossible was going to become possible.

What happened next has stuck with me for the rest of my life, as one of the South Christian players pushed one of our players in the back, grabbed the rebound, and put the ball in the basket with one second left.

For the next eight years as a varsity basketball coach, I held a grudge against officials for that one call. Twelve years later, after I was done coaching, I went back and watched the game over again for the first time. I almost turned the video off when they in-bounded the ball in those last seven seconds because I did not want to relive that moment and the ensuing emotions that took place.

While watching I discovered something.

The South Christian player did not shove my player as much as I thought, and our players did not box out like I had thought, which made it easier for them to get the rebound and score. Looking back, did I even tell my players to box out during that last timeout before the ball was in-bounded?

At that moment it became very clear to me that what we see during a game may be clouded because we want our team to gain every advantage and every call in order for them to be successful. Perception is not reality. Officials are human. They will make mistakes just like the coaches and players do during a game.

There still has never been a game that has been decided by an official. Some people will say that the Class B Semifinal boys basketball game (in 2010) was decided on an official’s call when they ruled one of Forest Hills Northern’s player's foot was on the line on his last-second shot when in reality his foot clearly was behind the line. That call cost them a chance to play in the (MHSAA) Finals.

Coach Steve Harvey was quoted in the paper as saying, "We had opportunities to take care of the game before it even came down to that shot.” In the moment it seemed like that one play cost Forest Hills Northern the game, but there were over 50 possessions on offense and defense that preceded the play and potential outcome.

Having the opportunity to spend time with officials inside the locker room has made it very evident they are serious about their jobs and calling the best game they can. I have had requests from officials to have a monitor available to break down film an hour and a half before their contest begins to see strengths and weaknesses in their placement and mechanics from prior contests. I have had officials upset at halftime or after a game because they realized they made a mistake. I have had officials contact me personally after a game to apologize for a call made during the contest.

In the business world and also in education we use the word collaboration a lot. Officials collaborate before, during, and after every contest to garner more knowledge so they can continue to improve.

This is not even their full time job. Officials do what they do because they love the game and want to give back to the sport that made an impact on them.

The next time we are at a game and we think the officials missed a call, let’s take a 30-second timeout to gather our emotions so we do not say anything we will regret later. Instead let’s spend our energy cheering on our teams to be the best they can be.