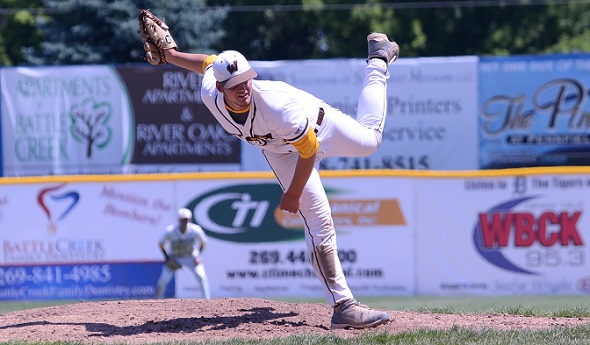 Thursday night, he talked with his players about separating themselves from those previous teams by taking the program to its first MHSAA Final.

Riding the skilled left arm of senior Brett Adcock, top-ranked Western earned that opportunity by beating No. 4 Sterling Heights Stevenson 4-2 in their Division 1 Semifinal on Friday at Bailey Park.

The Warriors will face No. 6 Birmingham Brother Rice for the title at 9:30 Saturday morning.

“We knew we could make it this year,” said Adcock, a three-year varsity player who will throw next season at the University of Michigan. “It’s a great feeling to be able to get (McDonald) there, and to get us there, and to have a chance to win a state championship.”

McDonald – an All-America pitcher at Central Michigan University who was drafted by both the Detroit Tigers and Oakland Athletics – brought teams to the Semifinals twice before. Both suffered six-run losses – 9-3 to Grosse Pointe North in 2006 and 6-0 to Saline in 2009.

Those teams and this one are three of eight he’s coached to at least 30 wins. But this team – made up of players who have been teammates or little league opponents since elementary school – is the first to eclipse the 40-win plateau. Western is 41-2.

Adcock said it’s because of an attitude instilled by his coach that keeps his players driving for more. McDonald credits “good, fundamental baseball” – aggressive base-running and clutch hitting that’s kept the Warriors from playing a bad game all spring.

Having a Division I prospect on the mound also doesn’t hurt. Adcock gave up three hits and struck out six in throwing a complete game and moving his personal record this season to 12-0.

Western scored first, in the top of the fifth inning, when senior rightfielder Brendan Taberski singled, stole second and later crossed the plate on a double steal after junior shortstop Seth Freed drew a throw by taking off for second from first.

Stevenson evened the score in the bottom of the inning, but the Warriors went ahead for good when senior catcher Grant Bridgewater singled in sophomore designated hitter Carson Eby in the sixth inning.

“There’s been something special about this team all year, since day one,” McDonald said. “This team has separated themselves in every possible way, and hopefully we can put a pretty big exclamation mark on an incredible season.”

Brother Rice (32-8-1) scored two runs in the bottom of the third inning and wouldn’t need more as junior Matt Ruppenthal threw a four-hit shutout, striking out five without walking a batter.

He also had three hits in four at bats and an RBI for the Warriors, who will play in their first MHSAA Final since winning a title in 2008.

Senior Tyler Bradner was one of four Highlanders to hit safely,  and he also threw an inning and an out of relief.

Howell, ranked No. 5 entering the postseason, was playing in its second straight Semifinal and finished this spring 33-8.