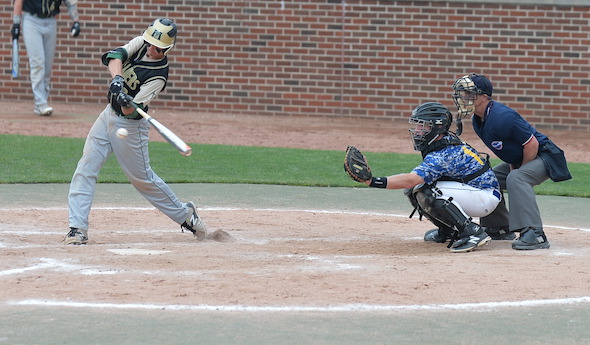 EAST LANSING – When Nicholas Holt needed it, he dug deep.

Holt allowed 17 hits, but got the biggest outs when he needed them Saturday as Muskegon Catholic Central topped Centreville in a 10-8 thriller in the Michigan High School Athletic Association Division 4 championship game at Michigan State’s McLane Baseball Stadium.

Centreville scored three runs on five hits in the seventh inning and had runners at first and second when Holt, with his 113th pitch of the game, got a game-ending groundout to touch off the Crusaders’ celebration.

Holt had white-knuckled it home, giving MCC – a winner of 10 MHSAA football championships – its first for baseball.

“Knowing that this is a lot bigger than me, that this has never happened at Muskegon Catholic Central, knowing that there’s eight guys around you trying to do the same thing and they’re working their butt off just like I am,” Holt said of his mindset in the seventh inning, when Centreville sent eight men to the plate and had the crowd on its feet. “The way to get through something like this is to not think about yourself, but to think about the guy next to you.

“I probably could have went 100 more pitches because I didn’t feel anything. I didn’t feel any pain. All I felt was just so much adrenaline and I just never stopped. You don’t think about if I’m hurt, you think about the guy at second base, the catcher – they’re working hard and you’ve just got to battle through whatever’s going on with you.” 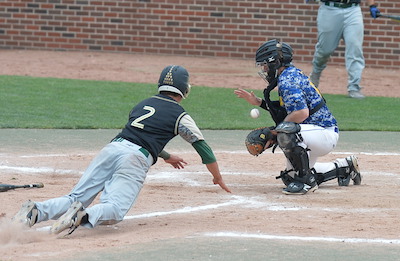 It was a battle of heavyweights as both teams came into the Final with just one loss. MCC finished 39-1-1; Centreville, playing in the first MHSAA championship baseball game in school history, went 29-2.

Jordan Gest, who started for Centreville, took the loss. He went three innings, allowing six runs on five hits, while walking two and striking out three.

Kool, who was the Bulldogs’ workhorse on the mound throughout their run to their first Final, also went three innings. He surrendered four runs on five hits. Just four of MCC’s 10 runs were earned. Centreville committed four errors.

The teams combined for 18 runs, 27 hits and six errors in a highly entertaining game. It all came down to Holt’s left arm in the seventh.

“He wasn’t coming out of the game,” MCC coach Steve Schuitema said. “We didn’t even warm anybody up. We’ve ridden him for four years now.

“I didn’t even want to look. I was getting physically ill over in the dugout. I just kept saying ‘hang on; just hang on.’ Usually when I say hang on, things don’t hang on. … Luckily we did today.”