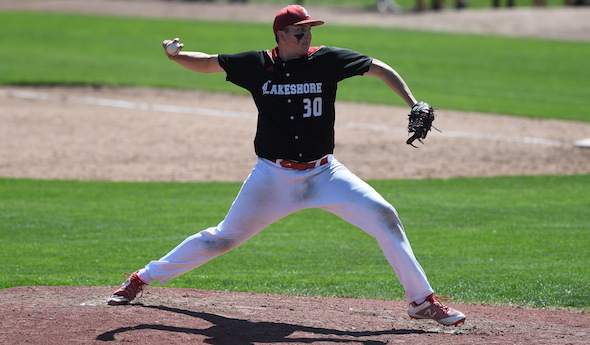 By Tom Markowski
Special for Second Half

EAST LANSING – Oli Carmody had been in pressure situations before, but nothing compared to what confronted the sophomore from Stevensville Lakeshore on Thursday.

With one out in a scoreless game, Carmody relieved Logan Morrow with runners on first and second base in the bottom of the ninth inning. Carmody went to 3-0 on Orchard Lake St. Mary’s leadoff hitter before retiring him on a fly to center. He got the next batter on a fly out to end the inning, and then singled in Lakeshore’s first run of a three-run 10th as the Lancers held on to defeat St. Mary’s 3-0 in a Division 2 Semifinal at Michigan State’s McLane Stadium.

Back in November, Carmody – playing his first season as goalkeeper on the soccer team – made a diving stop of a penalty kick to give Lakeshore a 2-1 victory over Plainwell in a Division 2 Regional Semifinal.

“It’s not even close,” he said. “Baseball is my life. This was the greatest experience of my life.

“I’ll admit that I was a little nervous (pitching in relief). When I saw I was missing high, I made adjustments. Once I got that first strike over, I got my confidence right there.”

Lakeshore (26-14) will attempt to repeat as Division 2 baseball champion when it faces Saginaw Swan Valley at 9 a.m. Saturday. Lakeshore also won Class B in 1990.

Thursday’s starting pitchers Connor Brawley of Lakeshore and Logan Wood of St. Mary’s were outstanding. Brawley allowed six hits, one walk and struck out seven in his 7 1/3 innings, and Wood went 8 2/3 and allowed two hits, three walks and struck out nine.

“It was crazy,” Brawley said. “The game flies by. I felt good out there. It was so hard (to come out). Our offense, we just compete. It’s been that way all season.”

Carmody went 1 2/3 innings to notch the victory, allowing no hits and one walk.

Catcher Bray Plomb and Cam Dalrymple started the 10th inning for Lakeshore with singles. A wild pitch put runners on second and third. Carmody singled to score the first run, and the second run scored on a wild pitch. Joel Brawley, Connor’s cousin, knocked in the third run with a bunt single.

St. Mary’s (28-13), the champion in 2015, had good chances to win the game in the seventh, eighth and ninth innings. The Eaglets had two runners in the seventh, but Connor Brawley recorded a strikeout to end the inning.

In the eighth, St. Mary’s loaded the bases and Alex Mooney lined out to right field to end the inning. In the ninth Carmody worked out of the jam to end the Eaglets’ last serious threat.

“There were many times we were against the ropes,” Lakeshore coach Mark Nate said. “They score, they win. We grinded it out.”

St. Mary’s is a young team, but coach Matt Petry gave no excuses. The Eaglets started four freshmen and four sophomores last season, so even though they have only four seniors on the roster, two of whom start, Petry said his players have been in a number of big games.

“We made the Catholic League final this year,” he said. “These guys have played in Comerica Park. We expected to make a good run in the tournament. We’re excited for the future. but today stinks. We hit the ball hard. We had runners in scoring position.”

VIDEO: The only run Stevensville Lakeshore would need came on this bloop single by Oli Carmody, which drove in Ryan Soper.

Swan Valley scored three runs in the first inning, and that’s all the Vikings needed to earn their first championship game appearance since 2001, when they defeated Wyoming Park, 4-1, for the Division 2 title. 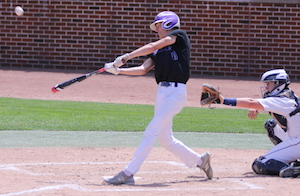 In the first frame, Swan Valley (33-8-3) loaded the bases with one out, and Easton Goldensoph was hit by a pitch to force in the first run Logan Pietz drove in the next with a single, and the third run scored on a wild pitch.

DeWitt (27-7) scored its run in the top of the sixth inning on a Jace Preston single.

Goldensoph’s brother, Avery, a freshman, went the distance for the victory. He allowed six hits, walked two and struck out five.

“We’re excited to be back,” Swan Valley first-year coach Craig Leddy said. “These kids are young. They don’t know what pressure is. They drive me crazy, they’re so loose.”

Nolan Knauf allowed just two hits in going all six innings for DeWitt. The one bad inning did him in.

“Nothing’s promised,” DeWitt coach Alan Shankel said. “Credit goes to Swan Valley. They made the plays. We were knocking on the door all game.”

VIDEO: Swan Valley scored all of its runs in the first inning; Easton Goldensoph is hit by a pitch with the bases loaded to force in the first run, and then Logan Pietz delivered an RBI single.