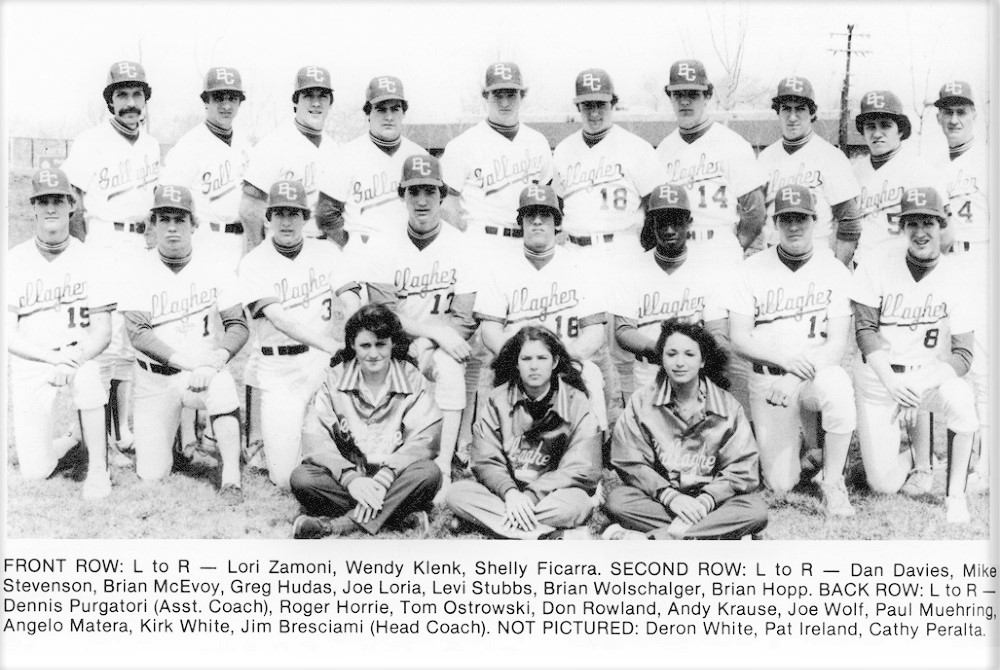 The nursery rhyme “Rain, Rain Go Away” has often served as unofficial anthem for the MHSAA’s baseball tournament, first held in the spring of 1971.

A decade after the start, downpours again turned a planned Saturday-sprint-to-the-finish into a three-day-marathon that finally wrapped up on Tuesday, June 16, 1981.

In the end, the 10th MHSAA Boys Baseball Tournament did feature a few ‘firsts.’  The finish of the season marked the first year that championship games for each of the Association’s four classes were scheduled for play at a single site. Previous championship action saw each class play its title game in a different city across the state.

Alumni Field at Central Michigan University served as host. Home of the Chippewas, the site served as an impressive backdrop, as the stadium had been recently renovated thanks to fundraising work by Mount Pleasant insurance businessman Jack Weisenburger, who had played five years of professional baseball in the Boston Braves organization, and nationally-known beloved sportscaster Dick Enberg, a CMU alumnus. 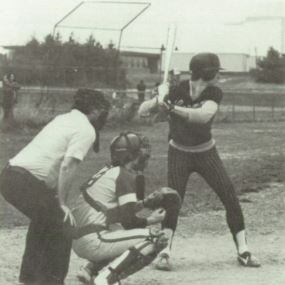 The smash, coming off Jeff Hamilton’s two-ball, two-strike pitch, was welcome relief to Lancers coach Jim Bresciami, whose team had stranded 17 runners on base prior to the game winner. Gallagher had loaded the bases in both the seventh and ninth innings, but was unable to score.

“Roger is our best bunter,” Bresciami told Detroit Free Press sportswriter Mick McCabe, “but we already had a man thrown out at the plate on a bunt so we just let him swing away, and the good Lord let it drop.” Horrie had walked three times and bunted twice earlier in the game.

The contest, twice postponed because of storms, was finally played on Tuesday.

Hamilton (who later played for the Los Angeles Dodgers from 1986-91) starred for Carman, notching three RBI on a triple in the top of the fifth inning to give Carman a 5-3 lead. Kirk White’s two-run homer for Gallagher in the bottom of the inning tied the game at five each. Darrin Lum doubled in the sixth for Carman, then scored on a single by Pat Richard to make it 6-5 before Don Rowland (later a member of University of Miami’s 1982 and 1985 NCAA championship baseball teams and a draft pick of the Detroit Tigers) tripled then scored following a sacrifice bunt by Andy Krause, again knotting the score.

With the win, Gallagher became Michigan’s first Class A team to repeat as champion, while Bresciami became the state’s first coach in Class A to win two titles.

On Monday, Bay City All Saints required only five innings to grab its second baseball title, trouncing Tecumseh 7-1. The Cougars had previously won the 1978 crown in Class C.

Tecumseh scored first, loading the bases in the top of the second inning and pushing a run across on Rex Robinson’s one-out single to grab a 1-0 lead. But it was all All Saints to follow. The Cougars responded  in the bottom of the inning with an RBI single by Mark Berent, then added two more with Mike McIlhargey’s 385-foot home run shot to bump the score to 3-1. Catcher G.J. Zanotti added a solo homer in the third inning, then All Saints scored twice more in the fourth and again in the fifth. The game was called under MHSAA rules after three downpours made the field unplayable. Dave Laprairie went the distance for the win.

“For many on the team,” noted the Bay City Times years later, “their biggest game was not the state final win over Tecumseh. … To them, the real highlight was their semifinal against Mount Pleasant that was played in Bay City's Veterans Park before a crowd of nearly 3,000 people.”  Mount Pleasant had finished as runner-up in Class B a year previous, and took All Saints – the top-ranked team in the Michigan High School Baseball Coaches Association (MHSBCA) regular-season final poll – to extra innings before surrendering, 10-7.

Following the postseason, All Saints shortstop Keith Miller was named to the MHSBCA Class B first-team all-state squad. (Miller would later play college baseball at Oral Roberts University, then carve out a nine-year career in the Major Leagues playing five seasons with the New York Mets and four with the Kansas City Royals.)

Allen Park Cabrini grabbed a 9-8 win over Buchanan in a thriller. It was the second title in three years for the Monarchs and coach Donald Oboza.

Suspended in the third inning on Saturday with Cabrini leading 1-0, the game was resumed Monday. Cabrini added four more runs in the inning for a quick 5-0 lead. Buchanan scored twice in the bottom of the third, and then tied the contest at 5-5 in fourth, highlighted by a John Ehlert home run.

The Monarchs jumped out to a 9-5 lead before storms delayed play for another hour and 35 minutes entering the seventh inning. When the game resumed, Buchanan rallied for three runs in dramatic fashion to pull within one.

“With (Buchanan) runners at first and second and no one out,” wrote Jack Walkden in the St. Joseph Herald-Palladium,  “the Bucks John Ehlert hit a long drive up the alley in right-centerfield. But (Cabrini centerfielder John) Stanko went far to his left to haul down the drive over his shoulder. The play proved even more important when two of the next three Buchanan batters collected hits. If Ehlert’s drive had gotten through, Buchanan probably would have at least tied the game.”

“That guy made a heckuva play on Ehlert’s ball,” said Buchanan coach Bob Storm. “That was the ballgame.”

Cabrini’s senior righthander Tony DeMarti, “who several times left his shortstop position to pitch” due to the MHSAA’s rule that forbid one hurler from pitching more than a combined 30 outs over 10 innings in the Semifinals and Final, was “brought … back to the mound (in the seventh),” according to McCabe, “where he eventually ended the threat …” 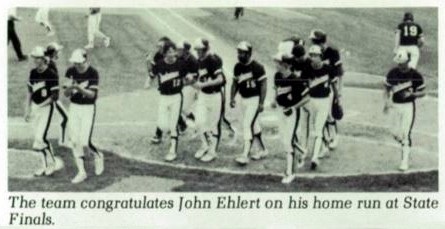 Cabrini first baseman Mike McKelvey finished with a single and a double, driving in three runs. Stanko notched a single and a double, scored twice and added an RBI on the day for the Monarchs. DeMarti, who had scored the eventual game winner, also earned the victory in relief – his eighth win in 12 decisions on the year.

In the only game to finish as scheduled at CMU, Reading’s Randy Spangler (13-1) pitched a complete game, scattering five hits as the Rangers downed Mesick, 1-0.

The run came in the top of the first inning as catcher Mike Shoemaker walked, moved to second on a sacrifice by Jon Keger, and then scored on an error when Spangler’s grounder to deep short was thrown away.

Paul Ruskowski walked and stole second for Mesick in the bottom of the seventh inning, but was left on base. Coach Jack Kerspilo’s Rangers ended the year with a 26-3 record. Starter Chris McNitt took the loss for Mesick, which finished the season at 23-4.