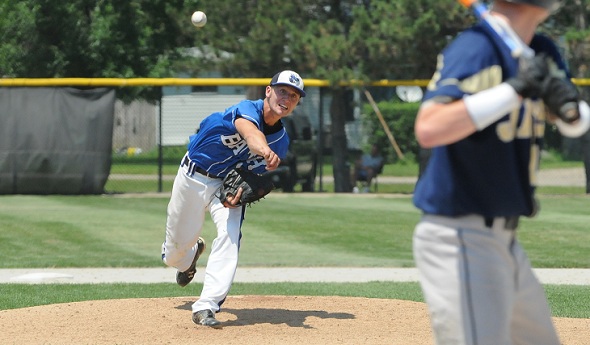 Not to call it effortless, but pitching has been a pretty smooth part of Nick Stiles’ high school career.

He holds multiple school Bath records, including for single-season and career strikeouts, and his career ERA is under 1.00.

But the school record he’s on the cusp of holding alone will mean the most.

Stiles, a senior, is tied with former Bees all-stater Brennan Powers with 33 career wins. That means a few things – Stiles has been resilient, beaten some pretty good teams in the Central Michigan Athletic Conference, and gotten help from teammates behind him defensively and at the plate.

“It’s a pretty cool deal. It will be pretty nice to be able to be remembered at the high school for something,” Stiles said. “It’s easy to pitch in high school. It’s not always easy to win.”

Stiles dialed his fastball up to 90 miles per hour last season, and that remains his go-to pitch. He’s been playing baseball since he was 6, and always was a hard thrower for his age. But he learned how to pitch instead of just throw on his 14-and-under summer team, and was a major part of the Bees’ Division 3 Semifinal run in 2010. Bath fell in that round 3-0 to eventual champion Shepherd, on what was Stiles’ 16th birthday.

“That year, we weren’t really expected to do anything as far as win that many games,” Stiles said. “I guess I got something out of it; just play every game like it’s the last one of the season.”

He hopes to take the Bees to the last game of this season to finish his high school career. It could also mark the end of his baseball career – although he has some college interest, Stiles also is his school’s valedictorian and might end up at Michigan State as a student only.

“It would be nice to go back to Battle Creek to play for a state championship, obviously,” Stiles said. “If it works out, it does. If not, I enjoyed my time.”

Click to read more about Stiles and this week's other High 5s honorees.

PHOTO: Stiles started in center field and come on to pitch in relief during Bath's 2010 Semifinal against Shepherd.