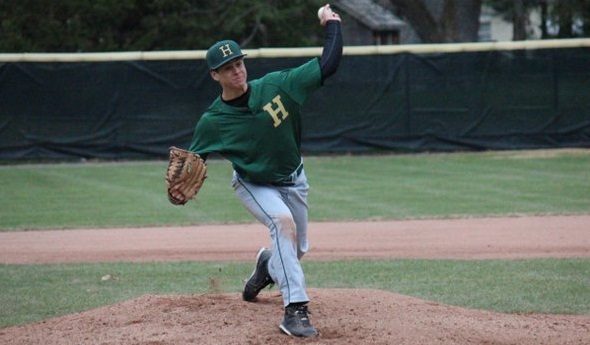 Given Josh Vyletel’s numbers this spring – most notably, his 15-2 record – Howell's senior ace had to have a pretty big junior year as well.

That's the natural thought, especially as this history-making baseball season approaches its final weekend with the Highlanders headed to the MHSAA Semifinals for the first time.

But in fact, he threw only seven innings and spent the rest of 2011 cheering on his older teammates.

“I just played my role as a junior and watched the seniors play. But when I had a chance, I took advantage of it,” Vyletel said. “I was only a junior. My chance was this year."

And he’s run with it all the way to Battle Creek. The Highlanders senior receives a Second Half High 5 this week for leading his team into the MHSAA Semifinals for the first time, and will get the ball Friday against Warren DeLaSalle.

Howell is 30-10, and Vyletel has won half of the team’s games including matchups with No. 1 Bloomfield Hills Brother Rice and No. 3 Northville, and against rival Brighton in Tuesday’s Quarterfinal. He’s thrown 12 complete games with an ERA of 2.00 and 73 strikeouts in 98 innings pitched.

To hear Vyletel tell it, that's all because of the defense around him and the bats getting him that key run in what have been a series of close games. He's quick to deflect the credit, as a humble standout should.

“He was one of my top one or two on JV two years ago, but last year he barely saw the field,” said Howell co-coach Jason Ladd, who with former Hartland coach Mike Weatherly took over the program this spring. “We played Traverse City Central (this spring), and he won one of those games, and he threw a shutout against Brother Rice. That let us know he was the real deal. We didn’t know he’d be that good, but we knew he’d be pretty good.”

The best sign came in a two-inning appearance last season when the left-hander struck out five of six Hartland batters he faced.

During the offseason, Vyletel picked up a slider and a new way to throw his change-up to add to his curveball and a fastball that he sped up to nearly 80 miles per hour. Among those he worked with was former Climax-Scotts standout Travis Wade, who reached the Houston Astros’ Triple-A team in 2002. “If you have command of two (pitches), you can be a success. Command of four speaks volumes,” Ladd said.

Vyletel has always been one of the better pitchers in his grade, but never the best. But in this season's doubleheader against Hartland, he ended up with wins in both games (after weather delayed the second game).

Last weekend, he drew Holt and a matchup against Kansas City Royals draft pick Justin Alleman in the Regional semifinal. Vyletel got hit hard over his four innings. But the Highlanders came back from a 7-1 deficit, and Vyletel came back to win the Regional final over Dexter.

He's a Tigers fan to the core and a Justin Verlander fan too. "My initials are J.V. I've got to represent it," Vyletel said.

And tied for the 10th-most wins in MHSAA history for one season, there's no doubt he's an ace now -- regardless of the credit he deflects or anything that happens this weekend.

“We just started winning,” Vyletel said. “And winning is all that’s been on my mind.”

PHOTO: Howell's Josh Vyetel threw a shutout against Bloomfield Hills Brother Rice in March that set the tone for one of the winningest seasons in MHSAA history.