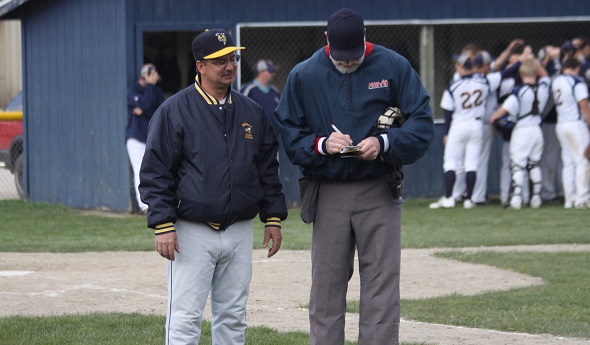 Rollie Carman set a goal of reaching 300 wins when he started coaching varsity baseball at Blanchard Montabella in 1994.

He reached that goal 22 years later when his St. Louis team defeated Harrison 9-1 in its season opener April 12. The Sharks then blanked Harrison 14-0 in the second game of the doubleheader.

“My first goal I ever had as a coach I just accomplished today, and it’s pretty emotional,” Carman said after the sweep. “You go through all those memories of all those years. It’s been a tough go.” 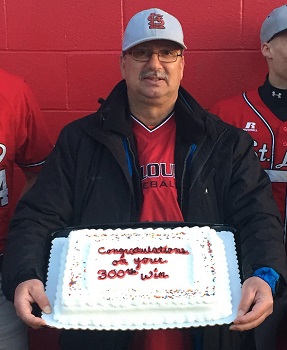 “That’s my wife over there,” he said of Karen Carman. “We finally got here, and this is what I’ve been shooting for for a long, long time. “To be honest, I didn’t know if I was going to get there or not. You don’t know if you’re going to be alive tomorrow when you get older. Quite a few kids who I coached in the past showed up to watch it. So that was kind of a thrill too.

“It was definitely a high point.”

PHOTOS: (Top) Rollie Carman, then coach at Ithaca, talks with an umpire during a 2012 game. (Middle) Carman, now coach at St. Louis, holds up the cake presented after winning the 300th win of his career last week. (Top photo by HighSchoolSportsScene.com, bottom courtesy of St. Louis athletic department.)