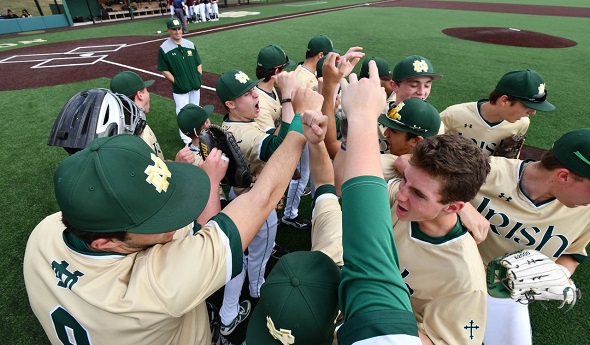 PONTIAC – Ryan Knutson is shocked by how well he and his teammates at Pontiac Notre Dame Prep played at the start of this season.

And the hope is that it will carry over to next month’s MHSAA Tournament.

The Irish were 8-22 a year ago and started this spring 16-0. Notre Dame Prep is 21-4 with less than two weeks remaining in the regular season, and the optimism is high that the run won’t end in District play as it has for the past 21 seasons. The Irish have won one District title in the 24 years that the school has been open, in 1996.

Over the past seven seasons, Notre Dame Prep has won a combined six District games.

“The team morale is up, and we bonded as a team,” Knutson said. “I credit the new coaching staff. Going to Florida over spring break helped us bond. It was during that streak – we had some close games – that the team-bonding paid off.”

Jason Gendreau spent 10 seasons as head coach at Utica Eisenhower, with some success. The Eagles won District titles in 2009, 2011 and 2015. The 2015 season also included a 2-1 victory over Birmingham Brother Rice in a Division 1 Regional Semifinal.

Although he’s not looking back, Gendreau, who continues to teach in the Utica school system, said it was not an easy decision to make when he accepted the position at Notre Dame Prep last June.

“(Eisenhower) is loaded with depth,” he said. “Then there’s all the relationships you build over the years. You know what they say. When a coach leaves, 50 percent are pleased, 50 percent are unhappy.”

Pardon Gendreau if he chuckles now and then about the idea of being a coach at Notre Dame Prep. As a child his favorite team was Notre Dame, the one in South Bend. Nothing was better than watching the Irish playing football on a Saturday afternoon.

Add to this another tale of coincidence, or magic, if you will. One of his mentors is Bob Lantzy, the longtime football coach at Eisenhower who recently completed his second season as head football coach at Rochester Hills Stoney Creek. Lantzy was an all-state running back at Harper Woods Notre Dame in the early 1960s and, when Gendreau was hired at the other Notre Dame, Lantzy dusted off his green and gold jersey and hung it on a wall in his house.

For two seasons in the early 2000s Gendreau was an assistant football coach under Lantzy. Something clicked during that brief period and the two have remained good friends over the years.

“Bob and I talk just about every night,” Gendreau said. “He was my mentor (as a coach), but more importantly he’s been my mentor in life.

“You see, I played football at Belding and grew up answering to (then coach) Irv Sigler. There are no more polar opposites than Irv and Bob. Plus, you throw in the west side and how they approach football. The approach is very different. Irv was the ultimate motivator and got in your face. I tried to coach like that when I got to Ike. It didn’t work. Bob molded me.”

Gendreau was well aware he was taking over a program that had experienced limited success, when it was a member of the Detroit Catholic League and now as an independent. That didn’t matter to him. He knew the athletes he was about to coach were well-disciplined. Teach them the fundamentals, let them have some fun (the Florida trip was a first for this group) and maybe they could win a few more games. 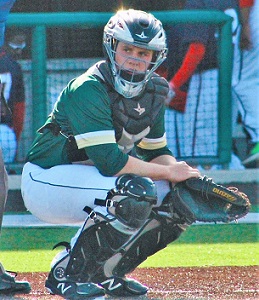 “Lantzy told me opportunity is not time-related,” Gendreau said. “A big thing was, I was able to bring my entire staff over. As far as scheduling, having a lot of relationships with Oakland and Macomb County coaches I was able to schedule competitive schools that were bigger. We played Sterling Heights Stevenson. We played Troy and Troy Athens.  We went to Birch Run to play in a tournament with just nine guys because of prom. We made it to the final and lost to Ann Arbor (Gabriel) Richard.

“Plan? I don’t know if we had one, but our goal was to finish .500. We felt comfortable with that. We didn’t want to get beat up. Usually it takes 2-3 years to build a winner. It happened a lot sooner. Part of it is our staff understands our role. We have athletes who are hungry. They’re loyal to one another.”

Notre Dame Prep lost just two seniors last spring to graduation but even so, Knutson said he was surprised by the tremendous start.

He pointed to two factors that keyed the impressive start, and they’re related. One is the defense.

“It’s a main focus,” he said. “Defense is one of the most consistent things of our team. When your defense works, you don’t need as many runs to win. Then on offense you will look to move runners along, trying to get that extra base.”

The second is fundamentals. Knutson said Gendreau and his staff emphasize the finer points of the game: when to bunt, what pitch to look for in certain counts and just an overall awareness of the game.

Even when the offense isn’t producing, defense is a part of the game the Irish can count on. In a weekend series at Lake Orion in late April, Knutson said the team crushed the ball in victories over the host team and Ann Arbor Skyline. The next weekend Notre Dame Prep struggled at the plate and resorted to playing small ball.

The pitching has been consistent as well. River Shea, Jack Kraussman and Jacob Genord have combined for a 17-2 record, and each has an ERA of 2.10 or lower.

There are no superstars on this team. Just two of the eight seniors will go on to play in college. Infielder Brian Blakeslee will attend John Carroll University in Cleveland and play soccer and baseball. Outfielder Tommy Cavanaugh will attend Capital University in Columbus, Ohio, to play baseball.

Knutson, who leads the team in hitting (.448), said he doesn’t plan on playing at the next level and, instead, will attend Michigan State with the intent on majoring in engineering.

“It was hard last year,” he said. “I am so thankful the (new) staff has come in and we’ve been able to make some noise.

“It was that way in football, too. We surprised people by reaching a District Final. It’s kind of similar in baseball. We’re the underdogs. It kind of fueled us.”

Gendreau said coaching at a large school like Eisenhower has its drawbacks. One is the fact a coach must make cuts. Another is it’s the coach’s responsibility to take care of the field. That takes time.

A bonus for Gendreau was the facilities at Notre Dame Prep. In what is nearly a mirror of what previously was added at Grosse Pointe Woods University Liggett, the field at Notre Dame Prep is all turf. No dirt. Not even in the infield. Gendreau said even the bullpen area is turf.

When one considers the often brutal weather conditions in Michigan, having a turf field at your disposal removes a lot of headaches as far as field preparation, postponements and rescheduling.

“They finished that this past winter,” he said. “When I took the job, I was expecting a grass field.”