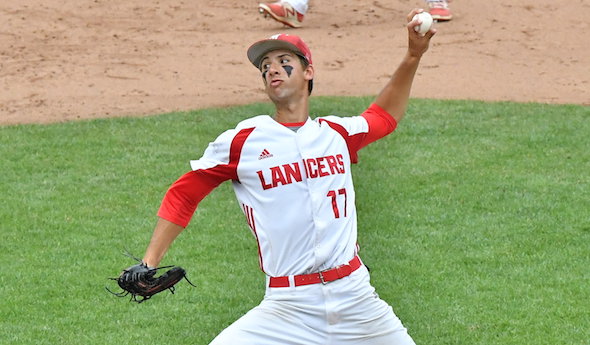 EAST LANSING – Baseball purists would have loved it.

Almost as much as Stevensville Lakeshore coach Mark Nate did.

The victory capped a 36-6 season for the Lancers, who completed a magnificent run through the tournament that saw their pitchers surrender just five runs.

Lakeshore won its Quarterfinal, 7-1, on Tuesday with Connor Brawley on the mound and on Thursday captured a Semifinal, 3-0, with Joel Brawley on the hill.

“I am so proud of my pitchers,” Nate said. “We gave up five runs all tournament. That might be a record. Seven games, giving up five runs.”

Gaishin, a senior left-hander, surrendered six hits and struck out five. He did not walk a batter, extending to three Lakeshore’s streak of games during which its pitchers did not issue a base on balls.

It was the second MHSAA baseball title in Lakeshore history. The Lancers captured the Class B crown in 1990.

“Max pitched his butt off, and I’m so proud of these kids,” Nate said. “It’s theirs. One hundred percent theirs. Right now it hasn’t really sunk in to me; maybe it will in about five minutes. Lot of smiles over there, and they deserve them.”

“Our guy, he mixed his pitches well, he threw strikes and we played outstanding defense behind him,” said John Glenn coach Jeff Hartt, whose team finished 34-9. “My guys never gave up, and that was their MO for the year. This is a tough one. It’s going to take a while for it to sink in, the type of season we had. It was a great year. We came up a run short in the state championship game.”

The Bobcats, who were also Division 2 runners-up in 2012, left seven runners on base including the potential tying run in the sixth inning. Matt Fisher had two hits including a double to lead John Glenn at the plate.

“We got some runners on. We just didn’t get the big hit when we needed it, or they got the big play when they needed it,” Hartt said. “It was a great ball game; great game.”

Lakeshore (36-6) scored the game’s only run in the bottom of the third inning. Sean Branch tripled with one out and scored on Ryan Remus’ sacrifice fly.

PHOTOS: (Top) Stevensville Lakeshore's Max Gaishin makes his move toward the plate during the Division 2 Final. (Middle) A Lakeshore runner tries to slide into third base under the tag.