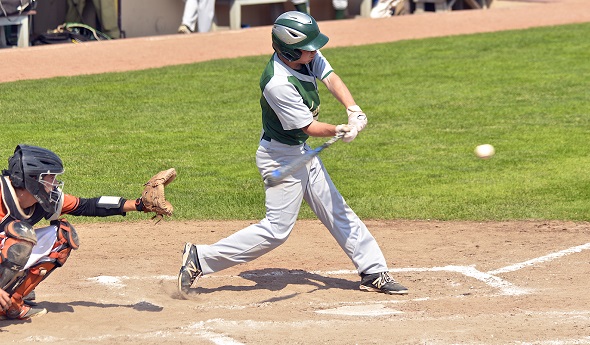 Reigning MHSAA champions Hartland and Jackson Lumen Christi will return to Michigan State University's McLane Stadium this weekend hoping to enjoy another celebration on the final weekend of the 2015-16 school year.

But nine of 16 contenders at this season's Semifinals are seeking their first MHSAA title in baseball, and three are hoping to play in a championship game for the first time. It's guaranteed the Division 4 champion will be a first-time winner, as none of the four contenders have claimed an MHSAA title before.

Tickets cost $8 per round and include admission to softball and girls soccer games those days also at MSU’s Old College Field. Radio broadcasts of all games can be heard online at MHSAAnetwork.com. All games will be streamed live online at MHSAA.TV and viewable on subscription basis. Click to order tickets in advance and for a parking map.

WARREN DELASALLE
Record/rank: 26-13, unranked
Coach: Matt Cook, sixth season (122-101-3)
League finish: Fourth in Detroit Catholic League Central
Championship history: Three MHSAA titles (most recent 2009), runner-up 2012.
Players to watch: Rob Zurawski, sr. 3B/OF (.389, 11 2B, 30 RBI); Mac Graybill, soph. C/IF (.344); Easton Sikorski, soph. P/IF (7-2, 1.84 ERA pitching).
Outlook: The Pilots have won 10 of their last 11 with victories over honorable mention Grosse Pointe North and Division 2 No. 10 Detroit Country Day during the streak after emerging from the always-tough Catholic League Central. DeLaSalle went a combined 4-5 against Division 1 No. 1 Birmingham Brother Rice and Division 2 No. 2 Orchard Lake St. Mary’s during the regular season. These are the most wins under Cook, who led a team with a sub-.500 record to the Division 1 Final in his second season, 2012.

LINDEN
Record/rank: 28-9-1, No. 5
Coach: Steve Buerkel, sixth season (140-73-1)
League finish: First in Flint Metro League
Championship history: Division 2 runner-up 2004.
Players to watch: Chris Kitch, sr. 1B (.336); Kevin Bates, sr. SS (.316, 11 SB); Jack Shore, jr. P (12-1, 0.31 ERA, 111 K pitching).
Outlook: Linden is making its second run to the Semifinals ever after winning its fourth straight District title. The Eagles entered the postseason having lost six of their last nine (and closing with Division 1 semifinalist Hartland), but have given up only one run in five tournament games, outscoring those opponents by a combined 18-1. Junior center fielder Ryker Rivera adds another spark to the lineup hitting .319 with 23 stolen bases.

GAYLORD ST. MARY
Record/rank: 31-5, No. 8
Coach: Matt Nowicki, 12th season (186-152)
League finish: First in Ski Valley Conference
Championship history: Class D runner-up 1988 and 1989.
Players to watch: Adam Nowicki, sr. SS; Nicholas Torsky, jr. P/IF; Drew Long, soph. P/2B. (Statistics not submitted.)
Outlook: St. Mary is on its longest run since those runner-up finishes at the end of the 1980s, and with only four seniors on the roster. The Snowbirds got past No. 9 Norway in the Quarterfinal and have won 16 straight. The six runs scored Tuesday were their fewest of the tournament; St. Mary had scored 10 or more in eight straight games.

PHOTO: A Traverse City West batter takes a swing during Tuesday's win over Rockford in their Division 1 Quarterfinal. (Click to see more from HighSchoolSportsScene.com.)