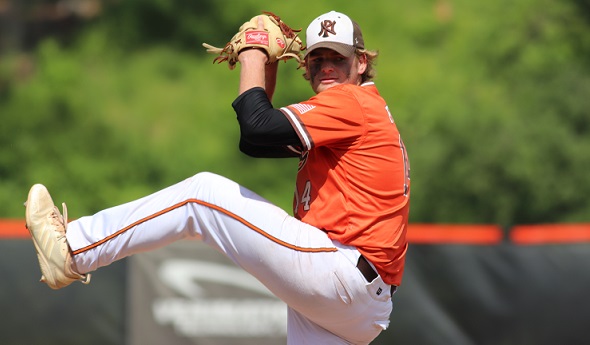 While it’s an obvious statement this spring’s 16 MHSAA baseball semifinalists have peaked at the right time, it might mean a little more this weekend at Michigan State University’s McLane Baseball Stadium.

Five teams – including half the final fields in Divisions 1 and 2 – were unranked at the start of Districts. The fifth team, Saginaw Nouvel, is riding one of the most impressive playoff streaks in any division despite entering the playoffs below .500.

Meanwhile, seven teams are playing for their first championships this weekend – including the highest-ranked remaining in three divisions.

Tickets cost $8 per round and include admission to softball and girls soccer games those days also at MSU’s Old College Field. Radio broadcasts of all games can be heard online at MHSAAnetwork.com. All games will be streamed live online at MHSAA.tv and viewable on subscription basis. Click for links to brackets, scores and a parking map.

BLOOMFIELD HILLS BROTHER RICE
Record/rank: 25-12, unranked
Coach: Bob Riker, 22nd season (603-215)
League finish: Third in Detroit Catholic League Central
Championship history: Three MHSAA titles (most recent 2008), three runner-up finishes.
Players to watch: Tito Flores, sr. OF/1B/P (.368, 44 R, 6 HR, 28 RBI, 26 SB); Sterling Hallman sr. IF/P (.330, 5 HR, 34 RBI); Jack Orlowski, sr. 3B/P/DH (.321, 11 2B, 6 HR, 34 RBI); Tyler Sarkisian, sr. P/OF/IF (3-1, 1.54 ERA, 63 K/50 IP).
Outlook: Brother Rice opened this season ranked No. 1 by the coaches association after making the Semifinals a year ago, but fell out of the list with a 7-7 start. The Warriors have won eight straight, with a District Final victory over No. 8 Birmingham Seaholm and Regional Final win over No. 5 Romeo among postseason highlights. Flores made the all-state second team last season and leads off a lineup that begins with four seniors and ends with five underclassmen. He will continue his career at University of Michigan, and Sarkisian will play at University of Chicago.

MACOMB DAKOTA
Record/rank: 21-16-1, unranked
Coach: Gerald Carley, ninth season (208-99-1)
League finish: Fifth in Macomb Area Conference Red
Championship history: Has not appeared in an MHSAA Final.
Players to watch: Greg Guzik, soph. IF (.359, 25 R, 19 RBI, 11 SB); John Sovey, sr. IF/P (.324 20 R, 5-3 pitching, 2.60 ERA, 50 K/51 IP); Andrew Wouters jr. OF (.315, 25 R), Mike Biebuyck, sr. P (5-4, 2.60 ERA).
Outlook: Dakota is another team that was ranked early – the Cougars have regular-season wins against Brother Rice and Romeo to their credit – but also played in a league with three teams ranked among the top 17 in Division 1 heading into Districts. They got past a big obstacle with reigning Division 1 champ Grosse Pointe South in the Super Regional Final – GPS beat Dakota three times during this regular season and also in last year’s Quarterfinal matchup. This will be Dakota’s first trip to the Semifinals and comes as the team is riding an 8-2-1 wave.

GLADSTONE
Record/rank: 29-7, No. 13
Coach: Kelly Shea, first season (29-7)
League finish: First in Great Northern Conference
Championship history: Has never played in an MHSAA Final.
Players to watch: Carson Shea, sr. P (.429, 22 SB, 10-1 pitching, 0.63 ERA); Cooper Cavadeas, sr. C (.378, 23 RBI); Cody Frappier, sr. RF (.382, 30 R, 29 RBI); Daniel Martin, sr. DH (.347, 36 R, 28 RBI, 25 SB).
Outlook: Gladstone is back at the Semifinals for the second straight season and fifth time in six years. The Braves have won 13 of their last 14 games and advanced with a Super Regional Final victory over No. 7 Beaverton. Frappier and Carson Shea were among key cogs on last season’s Semifinals team as well, and junior shortstop Zach Hanson (.346, 19 SB) is another impact bat from the lead-off spot and also is 4-1 on the mound. Kelly Shea formerly coached the junior varsity and as a varsity assistant before taking over the program this spring.