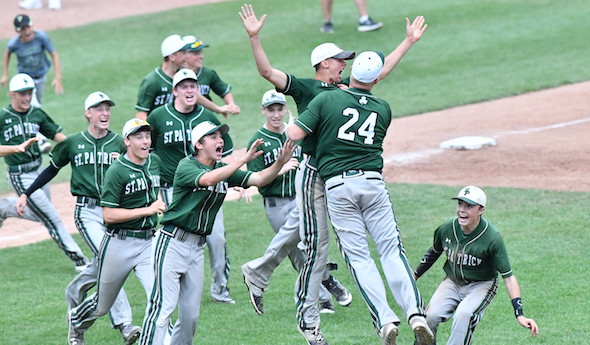 EAST LANSING – A team that took a year to complete the journey against one that could be starting down the same path.

A year ago, Portland St. Patrick lost in the Division 4 Final. On Saturday, the Shamrocks delivered.

Dan Mackowiak had four hits and Devin Fedewa and Graham Smith combined to hold the fort on the mound as St. Patrick won its first MHSAA baseball championship, completing an undefeated season with a 6-2 victory over Hudson at McLane Stadium on the campus of Michigan State University.

“It’s indescribable,” said Bryan Scheurer, who is in his 13th year as the Shamrocks’ coach. “I’m so proud of them. Lot of hard work, and they let us ride them all year long. We’re very particular in the way we coach, and they’re coachable. That’s all you can ask for.”

A year ago, the Shamrocks fell, 10-3, to Sterling Heights Parkway Christian in the title game. On Saturday, they took advantage of some shaky Hudson defense – the Tigers committed three errors, all during the first two innings – in seizing an early 4-0 lead.

“I think (experience) was calming, but I also think it was motivating that we had done the runner-up thing before,” Scheurer said. “They wanted to go one step farther.”

Neither team was necessarily expected to go as far as it did in the tournament. The Shamrocks returned several players from last year’s runner-up squad but graduated some significant contributors, while Hudson’s 18-player roster featured just two seniors and 14 underclassmen.

“We wanted to win 20 games and just keep moving the program forward,” Scheurer said. “We wanted to win the league title, we wanted to compete for a District. Maybe the smartest thing I did was I didn’t tell (the players) that. They thought we were supposed to be really good.” 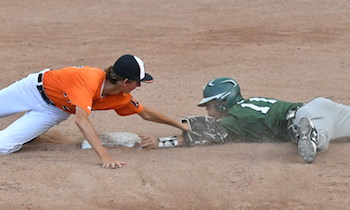 The Shamrocks (34-3-1) drew on the experience of having been there just 12 months prior, senior catcher and leadoff hitter Brendan Schrauben said.

“That’s big,” Schrauben said. “It definitely relaxed us when we got out to an early lead. When we’ve got a freshman on the mound, that kind of eases his game. He was able to pitch aggressively.”

Sophomore Isaac Davis had two hits for Hudson (27-17), while Josh Heistan started and took the loss.

The Tigers, who were playing in a Final for the first time in school history, were unranked and finished sixth in the Lenawee County Athletic Association.

“If we show up and put the work in, then it’s a launching pad,” Hudson coach Jeremy Beal said. “If we’re content with it, then it was just a great run. As far as being a program definer, that’ll depend on this group of kids, if they want to put the work in.

“I think it was just a matter of making plays and not making plays. It was really that simple. We didn’t make a couple (early); we’re trailing 4-0 as a result of it. We had a couple opportunities to score runs and we hit balls at people or didn’t execute. If we do those things we’re in the game, and we’re one swing away.”