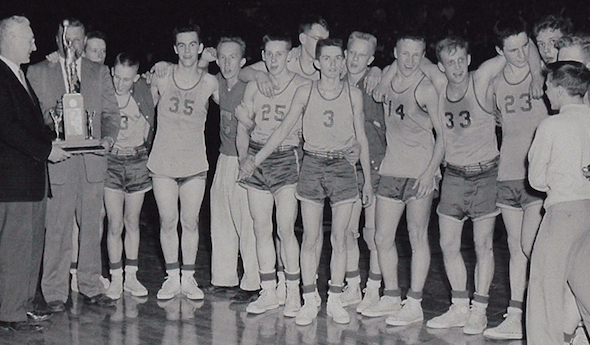 The win was part of Chassell’s state record 65-game winning streak, which still stands. Below is an excerpt of a piece on the Chassell streak written before the teams were honored as part of the “Legends of the Games” program at the 1998 Boys Basketball Finals.

The old adage in sports states that records are made to be broken. The longer, however, the record stands, the more legendary the accomplishment becomes.

Chassell's wins were the centerpiece of Upper Peninsula success in the MHSAA Boys Basketball Tournament during the first 11 years after the format unified the two peninsulas. From 1932 to 1947, separate finals were conducted in both peninsulas. Between 1948 and 1958, Upper Peninsula schools won three Class B crowns (there were no Class A schools in the U.P. at the time), two Class C titles, and seven Class D championships – over one-third of the available first-place finishes.

Wrote the Marquette Mining Journal in 1956, the year that Stephenson in Class B, Crystal Falls in Class C and Chassell in Class D all won MHSAA titles, "All of these is a startling figure since in the period the U.P. has only 42 (schools) -- one eighth of all the lower class quarterfinalists.

"Under the law of averages, the U.P. should come up with one state champ every three years."

It looked at first that the law of averages would catch up with Chassell. After starting the 1955-56 season with 11 straight wins, the Panthers lost a close January game at Trout Creek, and then won their way downstate into the finals against Portland St. Patrick. In that final game, St. Patrick held a 15-point lead at 68-53 with less than four minutes to play.

Coach Ed Helakoski, the architect of the Chassell winning streak, called time out and told his team to apply full court pressure, a rarity at the high school level at that time.

Playing without standouts Terry Pokela and Tom Peters, who had fouled out, Chassell scored the final 18 points of the contest, the biggest game-ending rally in Finals history, and won the first crown, 71-68. Sophomore guard Don Mattson scored the winning points with only seconds to play, finished the game with a finals record 25 points, and the Panthers finished the season 25-1 with 14 consecutive victories.

The winning streak stood at 39 entering the 1957-58 season, and the 10-year state record of 59 consecutive victories by Mass from 1947-49 was within reach. However, Mattson was the only returning starter from the back-to-back championship teams, and perhaps Helakoski's greatest coaching job lay ahead to replace four starters in a school which had just over 30 boys enrolled in grades 9-12.

Doelle, which had given the Panthers one of its closest games the season before, was leading, 62-60, in an early-season contest. As time ran out, Bob Belhummer of Chassell was fouled at midcourt and sent to the free throw line with a one-and-one opportunity. Belhummer sank both shots to force the only overtime game of the streak, a 72-66 victory.

The new state record of 60 consecutive victories came in a 45-43 decision over Marenisco in the MHSAA District championship game. A trip over the newly-constructed Mackinaw Bridge came two weeks later and the Panthers became the first school to bring an MHSAA trophy across the structure when the 65th victory was recorded, a 66-61 decision over Owosso St. Paul. Mattson tallied 27 points in the finale to set another championship game record.

In the 40 years since Chassell's incredible feat, only twice has the winning streak been threatened. Flint Northwestern racked up 60 victories between January of 1984 and February of 1986; and Saginaw Buena Vista had a streak reach 55 games between December of 1991 and December of 1993.

In many communities, success streaks come and go, but a constant ideal of school sports then and today was captured by John Pyykkonen, a guard and forward on the 1956 and 1957 teams who summarized the events: "I remember the friendly competition amongst the members of the team and how well we worked together and how our parents, fans and the community were behind us 100 percent of the way. One of the greatest highlights in a young man's life and will never be forgotten."

Records were made to be broken. But legends, especially Legends of the Games like Chassell, endure the test of time.

John Pyykkonen - 1956-57 Guard-Forward: "One thing I remember clearly, besides the games, is walking into Jenison Fieldhouse and being totally awestruck by the raised floor and the huge (in my eyes) guides who showed us around the building. I recall the game in 1956 when we were so far behind in points and we were able to overcome the point deficit by a full court press. The huge crowd gathered there were all cheering for the small-town team."

Robert Belhumer - 1956-1957-1958 Guard: "We had a great camaraderie among the members of our team. Also Chassell is a small town in the Upper Peninsula and the fans were there rooting for us during our seasonal games and were there for us at the championship games in Lansing."

Donald Jaakkola - 1956 Guard (On the championship game): "We ran out onto the court to a crowd of 12,000 people, most of whom were cheering for Portland St. Patrick. Needless to say, we felt a bit in awe as we came from Chassell, a small town in the Upper Peninsula.

"We were down 15 points with four minutes to go and two of our tallest players had fouled out earlier. Coach Ed Helakoski called a timeout and the basketball gods were with us. We threw a full court press defense and scored 18 points while holding St. Patrick scoreless. It gave us a screaming 71 to 68 victory. The crowd of 12,000 was now cheering for us."

Mike Wisti - 1956 Guard (On Coach Ed Helakoski): “I am quite sure there are many who will remember Ed Helakoski as a good coach. I'm sure he was a good coach; he had a knack for demanding discipline and teamwork, while not stifling the creativity of his players. However, I believe he should also be remembered as a great classroom teacher. He taught Government one year and Sociology the next and was the best classroom teacher that I had in high school. His ability to make Government interesting and explain how everything was designed to work is probably one of the biggest reasons for my lifelong interest in government and politics."

Kenneth Tormala - 1956-1957-1958 Forward: "The first year we surprised a lot of teams and people by winning the state championship. The second year we were picked to win when the year started and it would have been a real disappointment not to have done so. The third year was a real challenge since we lost so many players, but we had the backbone of the team, Don Mattson, who was an all-stater. This team was the most closely knit of all. We had a lot of very close games and had to dig down to everything we had learned to win many of them. A very satisfying year and we kept the winning streak going, to the surprise of many, including the previous teams.

"These memories will be fondly remembered until we die. Thank you to the late Mr. Helakoski."

James Komula, 1958 Guard (On what stands out from that season): "Being from a small town and playing in small gyms, the spaciousness and large crowd in Jenison Fieldhouse proved very exciting. Also, the reception and festivities upon our triumphant return to Chassell will forever be a highlight of personal memories. People were waiting in their vehicles nearly 30 miles from town to accompany our motorcade home.

"Although I didn't give it much thought, the experience and influence of playing on that team would set the direction for my career. Upon graduation from Michigan Tech, I was given an interim position to teach and coach at L'Anse High School. In 1966, I was assistant coach when L'Anse won the Class C state championship. After that I moved to Livonia, where in later years I was head coach at Bentley High School. Although I never intended, my high school basketball did influence my career to work with youngsters, and help them share in the rewards of the commitment and lifelong learning of athletics."

Terry Pokela, 1956-1957 Center: "We truly had a team. Coach Helakoski did not allow us to think of individual statistics or anything like that. He constantly emphasized the team concept. It certainly paid off.

"Also, we were one of the first teams to fast break after every missed shot by opponents. Our three-lane break broke many team's backs, as they couldn't keep up with us. Coach Helakoski emphasized rebounding position to enable the fast break to get started. We could also shoot field goals from any part of the court. Don Mattson would have scored 40 points a game if the three-point field goal would have been in effect."