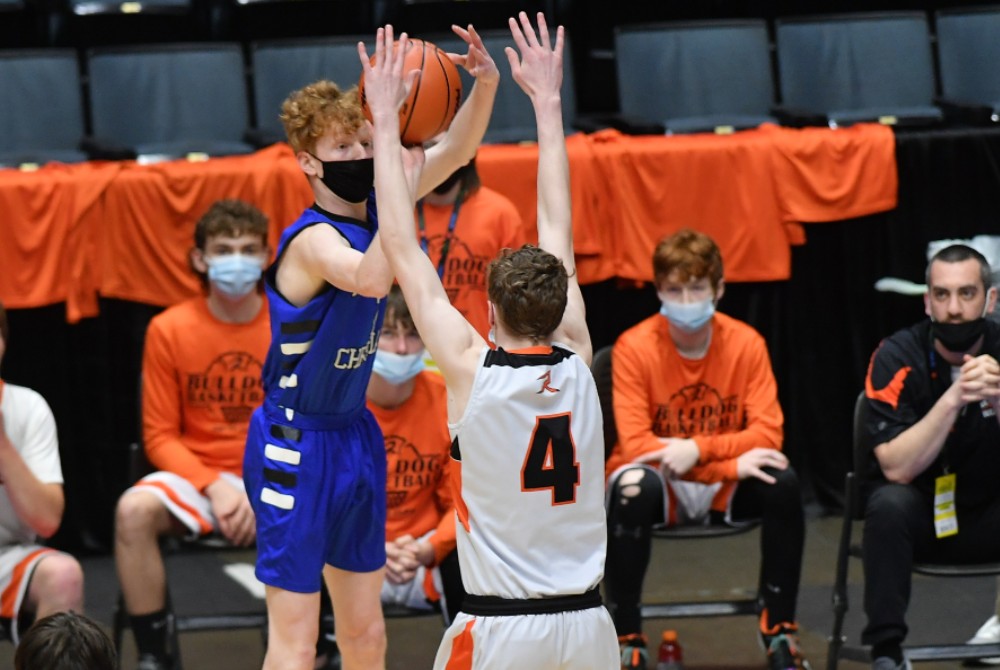 GRAND RAPIDS – It may be a familiar destination for Wyoming Tri-unity Christian's boys basketball team. But there's no arguing the path to get there has been strewn with potholes this season.

The Defenders will play in their ninth MHSAA Finals championship game since 1996 after racing past Rudyard 61-43 in Thursday's first Division 4 Semifinal at Van Andel Arena.

While playing in a Final is nothing new for Tri-unity, the win overcame another obstacle in what has been a challenging season for the Defenders (14-2), who move along to Saturday's 10 a.m. championship game at Breslin Center. Among the issues Tri-unity has overcome include playing only 10 regular-season games, axing the last two weeks of the schedule due to a COVID shutdown, playing only once in an abbreviated Regional and losing 12 seniors – plus coach Mark Keeler – to quarantine protocol early in the year.

Despite the reduced schedule and missing out on the chance to build early momentum, the Defenders have more than prevailed. The program has won four Finals titles and will make its ninth trip under Keeler, who this winter passed Paul Cook for sixth place on the state's all-time win list (627).

"It's been a very trying year," Keeler said. "I knew we had good potential, and guys have responded so well. We played a tough schedule, the kind of competition you want. We were able to stay humble, which is always something I have believed in. It's been a tough year, but it's been really exciting for the school.

"The guys have played awesome all the way through. We were confident we could make it to the Breslin, and we peaked at the right time. We've got a great senior group, and we really want to finish it out." 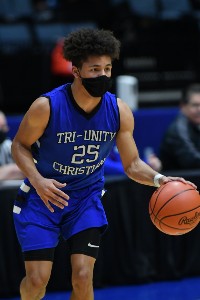 While Keeler said he believed all along the team was a Finals contender, co-captain Austin Treece, who finished with 11 points and eight rebounds, said there was pressure to meet lofty goals.

"For sure," he said. "There is always pressure, but we just play bigger. We do a great job because I think we're a hungry team."

Co-captain Jaden Ophoff, who had six rebounds, two assists, two steals and four points, said the team has never felt distracted from its goal of playing in East Lansing. Beating Rudyard was just another step, he said.

"We didn't know what to expect from them, coming from the Upper Peninsula," he said. "We were able to adjust to them."

Tri-unity junior guard Brad Titus was virtually unstoppable. He scored 28 points on 11-of-21 shooting while adding four rebounds, six assists and six steals. Titus, who started as a freshman two years ago on a Division 4 semifinalist, said he's heard about playing in a championship game for years.

"This is really big, a blessing. I love it," he said. "We went two years ago, but we were cut short two years ago. It's great to be going."

"We tried to trade for their point guard, but Mark wouldn't buy it. I told him we'd even throw in the team bus, but he wouldn't go for it," Suggitt said. "He was the best ballplayer on the floor. He could take over whenever he wanted to."

Rudyard's E.J. Suggitt, who finished with 19 points, said the game plan was to keep Titus in check.

"We wanted to stop (him)," Suggitt said. "But even if you stop him, their role players will step up. They are a very tough team; they just played better basketball."

Keeler thinks Titus has played well enough in his career to be at least a two-time all-stater. He's thrilled Titus will have the chance to join his teammates in a championship game.

"The numbers (of past championship game trips) don't matter because this is a whole new group," Keeler said. "It's exciting for them, and it's something they will always remember. They've heard from other players we've had what it's like. It's a thrill."

PHOTOS: (Top) Tri-unity Christian's Aidan DeKlyen pulls up for a shot in front of the Rudyard bench Thursday at Van Andel Arena. (Middle) The Defenders' Brady Titus was the game's high scorer with 28 points. (Click for more from Hockey Weekly Action Photos.)