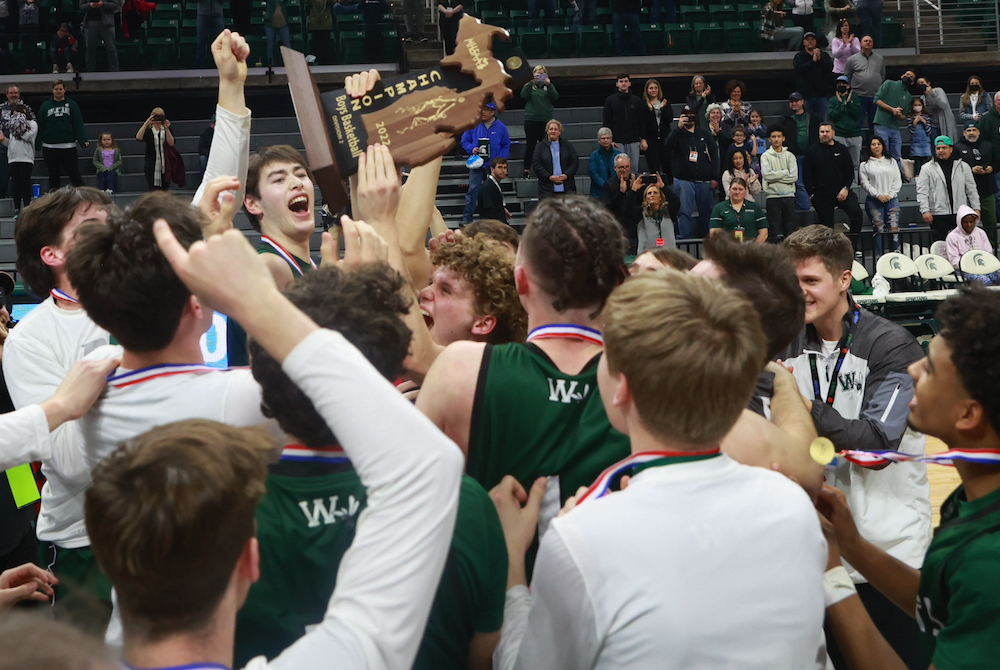 EAST LANSING – Before Saturday’s Division 2 Final, the Williamston boys basketball team hadn’t been challenged much during the MHSAA Tournament, winning every game by double digits.

But the unbeaten Hornets received all they could handle and more against reigning champion Grand Rapids Catholic Central.

Willamston withstood a furious rally by the Cougars and poor free throw shooting to pull out a dramatic 68-65 overtime win at Breslin Center.

It was the first Finals title for Williamston boys basketball since 1940, as the Hornets finished the season unbeaten at 27-0.

“These guys did something that people will remember forever,” said Williamston coach Tom Lewis, who brought out an old team photo of the 1940 champions before the game. 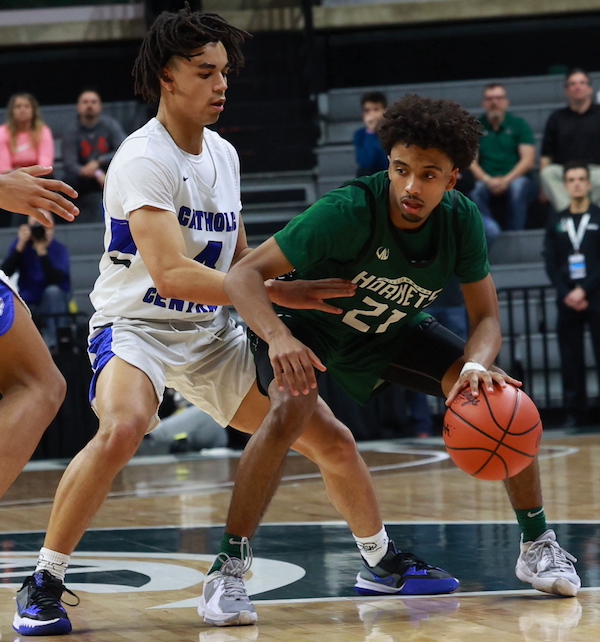 “And they took some heavy punches and most teams would have a hard time pulling that game out, but my guys had just enough counterpunch to get that done. I really don’t have the words to say how proud I am of my entire team.”

Torrid shooting in the second quarter, including five 3-pointers, helped stake the Hornets to a 36-28 halftime lead.

Williamston led by as many as 16 (53-37) in the third quarter, but the Cougars stormed back.

Catholic Central chipped away at the lead and outscored the Hornets 16-7 in the fourth quarter.

“When they were scoring and making that run and our lead was dwindling, we just kept talking about how we need to stick together,” said Williamston senior Mason Docks, who scored a team-high 27 points and knocked down six 3-pointers.

“We had to keep trusting each other and not get away from what we do. If we started being selfish, then we would've lost that game.”

Despite missing all five free throw attempts down the stretch in the fourth quarter and going a dismal 9 of 21 from the line for the game, the Hornets still had confidence in overtime.

“We had to have trust in our team,” said Hornets 6-foot-10 senior Max Burton, who had 23 points before fouling out. We had to trust that our guards would make the right plays, and we would just go out there and finish it. 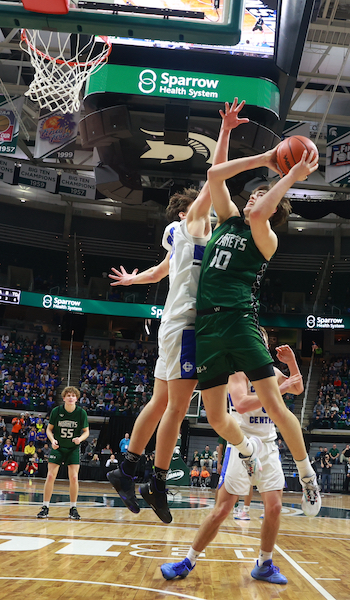 “We haven’t had a lot of close games this year, but we knew how to handle these situations from AAU and in practice. We knew this wasn’t going to be a cake walk because Catholic Central is an extremely tough squad with great guards.”

Docks made a crucial 3-pointer in overtime to give the Hornets the lead for good.

The Cougars erased the 16-point deficit in part thanks to the stellar play of junior guard Kaden Brown, who had a game-high 33 points, including 25 during the second half and overtime.

He forced extra time with a 3-pointer from the corner with 44 seconds left in regulation that tied the score at 59-59.

“We’ve had a few games like that this year where we’ve been down big, but a lot of credit goes to our players in the huddle for staying calm at halftime and then just regrouping,” Catholic Central coach TJ Meerman said. “We kept battling, but tonight was an absolute battle of wills. Their will to take the game over early and our will to come back.”

The Cougars (25-2) lost for only the second time this season. Their only other defeat was to Division 3 semifinalist Flint Beecher.

Catholic Central senior and Mr. Basketball finalist Jack Karasinski had 16 points, but picked up his fourth foul in the third quarter and fouled out late in regulation.