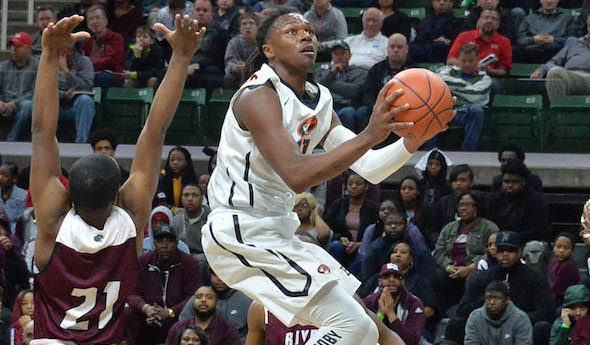 EAST LANSING – Benton Harbor is wearing the weight of history, with the last name of Don Farnum across the chests of the team’s warm-up T-shirts.

But this season’s Tigers have been aiming to add to their school’s long legacy of boys basketball success – and become its first MHSAA champion in the sport since Farnum led the team to back-to-back titles in 1964 and 1965.

Benton Harbor earned another championship opportunity Friday at the Breslin Center with a 60-49 Class B Semifinal win over River Rouge.

The victory sent the Tigers back to the title game for the 11th time and first since 2014.

“It’s a lot of weight, but we don’t let it get to our heads,” Benton Harbor senior guard Dennie Brown said. “We know this is a great group. We’ve had chemistry since back in middle school. So we knew coming into the season it would be something magical if we’d play the way we’ve been playing our whole lives.

“So it’s not much weight, just motivation.”

The Tigers (26-1) fell to New Haven 78-49 during last season’s Semifinals, as the Rockets went on to win their first Class B title.

A number of Benton Harbor’s players are the same this time around, but this is a new team.

“It’s been a dream season. We’ve gone 27-1, and we had a bad half against Hazel Park – we should be undefeated,” said Benton Harbor coach Corey Sterling, noting his team’s lone loss 77-70 to the Class A Vikings. “But we want that ring tomorrow.

“This senior group earned it. They worked hard in the offseason. We lost last year … and they did everything I asked them to do. And they’re great character kids off the court with high GPAs; I’m so proud of them.”

Facing 14-time champ River Rouge, Benton Harbor saw another team both rich in history and also back at the Semifinals for the second straight season. But Rouge brought only one returning starter to East Lansing.

“It was a great experience to be here, especially as I have a young team,” River Rouge coach Mark White said. “After coming here last year and losing a lot of key players, just the magnitude of experiences, it was great for us. It was great for us, a great achievement to make it here, to play a really good team.”

White then added: “I’m not in the excuse-making business, but I’m looking forward to our guys being seniors.”

White’s young squad kept up with Sterling’s veterans for a half, and the score was deadlocked 25-25 at the break. But starting with a Johnson basket with 2:49 to play in the third quarter, the Tigers put together an 11-4 run to run out the quarter with a 10-point lead. The advantage got as large as 14 but no smaller than eight the rest of the way.

Brown added eight points and four assists for the Tigers, and senior guard Devan Nichols had six points and five rebounds as the starting five scored all but two of the team’s points.

The “Farnum Boyz” shirts worn by the Tigers are more a dedication to their home court, the Don Farnum Gymnasium, than to the man himself. But a first championship in more than a half century surely would bring a lot of pride to the building and the many who have shined playing in it.

“Coming in, we just knew we had to stay focused,” Baxter said. “We have a goal, and we’ve had this goal since we were young. Coming into this game, we wanted to prove a point we didn’t prove last year.”

PHOTOS: (Top) Benton Harbor’s Carlos Johnson gets past three defenders on the way to the basket Friday. (Middle) Johnson (11) gets a hand up as River Rouge’s Nigel Colvin drives.