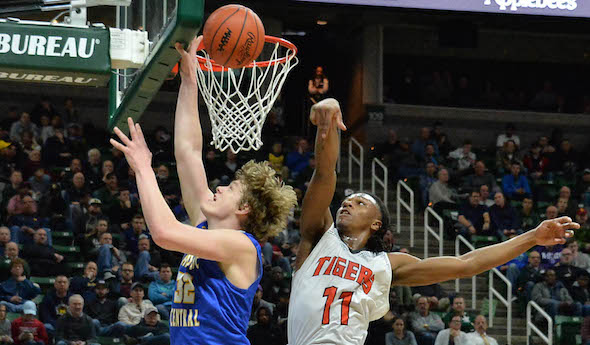 EAST LANSING – Carlos Johnson knew it was good when it left his hand. His Benton Harbor coaches and teammates knew it, too.

The star sophomore hit the biggest shot on a Saturday night full of them – a 3-pointer with 10 seconds to play – to give the Tigers a 65-64 overtime win against Grand Rapids Catholic Central in the Class B championship game.

“I was hoping (senior Elijah Baxter) would get me the ball for the last one,” Johnson said. “I passed it to him, and I was like, ‘Oh, I hope he passes it back.’ I was ready for the shot, and I knew it was gonna go in. I was just thinking to go for the kill the whole time. When it left my hand, my eyes lit up and I said, ‘Oh, that’s going in. Straight water.’”

The shot, and an ensuing, frantic defensive stop, sent the Benton Harbor bench and cheering section into hysterics as they celebrated a long awaited return to glory for a program that was among the state’s most dominant more than a half century ago.

It was a history the Tigers embraced, wearing shirts for warm-ups that read, “Farnum Boyz” an homage to their gymnasium and its namesake, former Benton Harbor coach Don Farnum, who led the team to back-to-back titles in 1964 and 1965.

While a star sophomore led the way with 24 points, 11 rebounds and the game-winning shot, Benton Harbor is otherwise a senior-dominated team, with five playing a major role. And those seniors had been pointing to winning this title since they were in eighth grade – the last time the Tigers made the Class B Final and came up just short in 2014.

“It means a lot to us, because previously it was a weight on our shoulders that it had been so long, but it was a big motivation,” senior guard Dennie Brown said. “Since we were (youngsters) in fourth grade and middle school, we said we were going to win. We didn’t want to be too cocky; we wanted to be humble also with it. We put the pedal to the metal and worked in practice every day.”

The Tigers trailed for most of the four-minute overtime session, and were down 64-62 when Johnson collected a rebound with less than 20 seconds to play. When he got the ball near the top of the 3-point line, he saw his defender backing off him and let the winning shot fly. 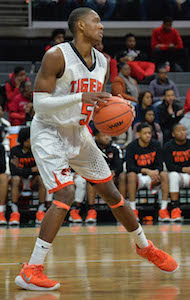 “The feeling of it, I can’t even describe it,” Johnson said. “It was just like everything just came to me. I looked up and all I could see was nothing but the lights and Michigan State, and I was like, ‘Oh God, I did that.’”

The game-winner wasn’t the only do-or-die shot with the clock winding down for the Tigers on the night. Senior Shawn Hopkins hit another just to get what was already a back-and-forth contest to overtime.

As Baxter lost control of the ball driving down the lane during the closing seconds of regulation, he saved it from going out of bounds and found Hopkins cutting to the basket. Hopkins avoided the shot-blocking attempt of 6-foot-8 Catholic Central senior Jacob Polakovich to hit a layup and tie the game at 55 as the buzzer sounded.

“I was just thinking be aggressive trying to get to the rim, hopefully draw a foul and get to the line,” Baxter said. “It didn’t go that way, but it’s the state championship game, so you have to show heart and hustle, so I just kept going and trying to save it. Shawn was just in the right spot. It was like a brother thing; he just knew to cut to the rim while I was going out of bounds.”

Hopkins finished with nine points and 11 rebounds for the Tigers (27-1), while TJ Jones had 10 points and Devan Nichols added nine. Baxter dished out six assists to go with his seven points.

Catholic Central (24-3) hit its fair share of big shots down the stretch as well. Junior Darrell Belcher hit a 3-pointer from the corner with 40 seconds left in the fourth quarter to put his team up 54-51. He hit another big 3 in overtime to give the Cougars a four-point lead with about two minutes to play. Michigan State-bound senior Marcus Bingham also hit a big 3-pointer in overtime to give the Cougars an early lead.

Belcher and Bingham each finished with 21 points, and Bingham added 13 rebounds. Polakovich added 12 points and 12 rebounds.

But in the immediate aftermath of the loss, disappointment was overshadowing those great performances for Catholic Central.

“It was a really tough way for us to end our season,” Catholic Central coach TJ Meerman said. “I just told our guys, we just got out of the locker room, and I just spent a few minutes telling them how thankful I am, how thankful our staff is, how thankful our school is to have young men like we have up on stage in front of you.

“The game didn’t end the way we wanted it to. We battled, we battled all year long. I’m proud of our guys, and congratulations to Benton Harbor on a big win.”