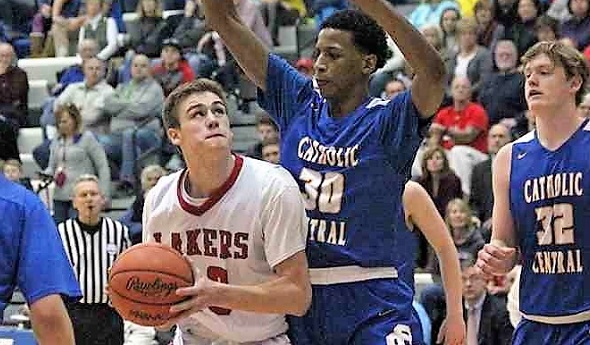 However, another asset in his overall game has come to the surface during the early weeks of this season.

For Bingham, who has averaged 27 points and 16 rebounds during the Cougars’ 3-0 start, the improved range has come through his time in the gym.

“It all ties in with the work I’ve put in on my shot,” Bingham said. “And I’m just going to keep getting better and better, so why not? I can shoot, so why not use it, and Coach likes it when I shoot it.”

Meerman has no qualms about Bingham hoisting up 3-pointers, especially when he makes the commitment away from practice.

“He loves to be in the gym, and on our days off he’s still in the gym working on his handles, working on his shot,” Meerman said. “You don’t get to shoot it that well without putting in a lot of time outside of practice time, and he does that. It’s exciting for me, and it’s exciting I’m sure for Coach (Tom) Izzo and the Michigan State staff as well.”

Bingham, who recently signed with the Spartans, also possesses abilities that sets him apart from other high school players.

“He handles it well, he passes well and then he has a seven-foot reach to go with that height,” Meerman said. “With his skill and length, he’s capable of doing things that not a lot of people can do in basketball.”

It’s been an incredible rise. Bingham didn’t play high school basketball at all as a freshman. He played only half a season last year after transferring to Catholic Central, but averaged 16 points and 10 rebounds per game. That was followed by a successful AAU season, and the Division I college offers began rolling in.

A growth spurt didn’t hurt either. He sprouted up eight inches over the past two years. 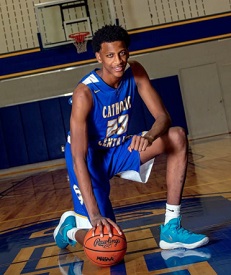 “I’ve grown, but I’ve also gotten a lot stronger and bigger,” Bingham said. “I’ve just been working, and being bigger I can do things easier. It has been a blessing.”

Meerman has seen a big difference in Bingham from a year ago, and admitted that the end of a frenzied recruiting process also has helped.

“I think he’s more comfortable playing structured basketball,” Meerman said. “He hadn’t played a lot of basketball in his life outside of his sophomore year, and the distraction with the mass recruiting wave that came his way toward the end of the season is gone. It has been a nice relief for him to just focus on school and ball.”

Bingham also added 12 pounds of muscle to his frame.

“He has a ways to go with that, but you can see the difference in his play and with his pace of play,” Meerman said. “He’s understanding the system and the way we want to play, and becoming a senior he understands he has to play at a higher level that he did last year.”

The Cougars claimed conference and District titles a year ago, but are striving for more with a talented nucleus surrounding Bingham.

“We have a great group of guys, and they like to share the ball,” Meerman said. “I like how dynamic we are, and we have good guard play and very good bigs.”

“We’ve been playing good and sharing the ball more than we did last year,” Bingham said. “We’re just working hard as a team to do what we have to do to get wins.”

Meerman scheduled an early-season gauntlet of the top teams to help measure where the Cougars stand.

“We wanted to find out right away who we are and what we need to work on,” Meerman said. “That’s what we’re working on right now, and we have our last early test on the road against one of the best teams in the state.”

Catholic Central will travel to Wyoming Godwin Heights tonight for a highly-anticipated showdown between elite teams.

“It’s going to be exciting to be a part of that, and gyms don’t sell out like that unless players have put in a lot of time in the gym,” Meerman said. “It’s an opportunity for us to compete against the best and see where we’re at, and it’s going to be fun. It will be a game and crowd they will remember their whole lives.”

Bingham is looking forward to matching skills against Hastings, who has committed to Butler, and Norman, who recently reopened his recruitment after previously committing to Texas-El Paso.

“I’m really excited just knowing that everyone is going to be there to see Catholic Central and Godwin play,” he said. “Godwin is a good team, and we’re just going to go out and fight and do what we have to do to win.”