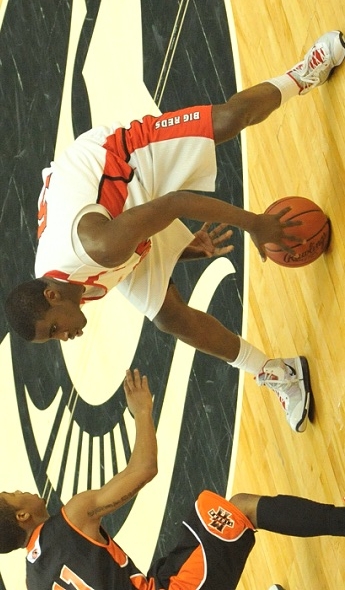 Loaded expectations come with being the favorite for any MHSAA championship.

But a pair of favorites and two groups of strong contenders make for loaded fields for both the Class A and B Boys Basketball Finals this weekend at Michigan State's Breslin Center.

In Class B, reigning champion Lansing Sexton is a heavy favorite, but 2011 runner-up Muskegon Heights and 2010 champion Detroit Country Day also are in the mix. And in Class A, top-ranked Saginaw and No. 2 Romulus both have reached the final weekend of the MHSAA winter season.

Below is a schedule for Friday's Semifinals and all four Saturday Finals. Tickets cost $8 per session, and parking at Michigan State is $5. All Semifinals will be streamed live at MHSAA.tv along with the press conferences after each, and the A Final will be broadcast live on Fox Sports Detroit -- with Class B then broadcast on delay at 10:30 p.m. Saturday. Click for scores as they come in, and return to Second Half for coverage of all 12 games this weekend at Breslin.

Now, a look at this season's Class A and B Semifinalists (Click for previews of the Class C and D Semifinalists.):

MACOMB L’ANSE CREUSE NORTH
Record/rank: 22-4, unranked
League finish: First in Macomb Area Conference Red
Coach: Jay Seletsky, 10th season (140-80)
Championship history: Has not appeared in an MHSAA Final.
Best wins: 54-52 and 64-59 over Romeo, 51-50 over Fraser (Regional Semifinal), 43-41 over Detroit Denby (Regional Final).
Players to watch: Tyler Conklin (6-3 jr. G – 12 ppg, 5.9 rpg, 3.0 apg), Robert Hopkins (6-3 jr. G – 9.5 ppg).
Outlook: L’Anse Creuse North might be the biggest surprise of this weekend after finishing 10-11 a year ago and posting two sub-.500 records over the last three seasons. But Seletsky has led the team to three league titles in five seasons, and his team knows not only how to win, but how to win close games – eight wins this season were by three or fewer points, and two more were by four points.

ROCKFORD
Record/rank: 21-5, unranked
League finish: Tied for first in O-K Red
Coach: Nick Allen, first season (21-5)
Championship history: One MHSAA title (2003).
Best wins: 62-55 over Class B honorable mention Grand Rapids Christian, 36-35 over Hudsonville, 43-32 over East Kentwood, 55-53 over Okemos (Quarterfinal).
Player to watch: Chad Carlson (5-9 jr. G – 13.2 ppg, 59 3-pointers).
Outlook: After a tough league race that ended with Rockford sharing the championship with both Hudsonville and East Kentwood, Rockford was plenty prepared for the tournament – and came back from 10 down in the second half to win the Quarterfinal. Carlson runs the point and is the player teams focus on most. But four more – 6-1 Alex Durkin, 6-3 Mitch Caywood, 6-1 Chase Fairchild and 6-6 Ivy Johnson – all average 5.5 points per game and help bring a physical edge.

SAGINAW
Record/rank: 24-2, No. 1
League finish: First in Saginaw Valley League
Coach: Julian Taylor, first season (24-2)
Championship history: Five MHSAA titles (most recently 2008), four runner-up finishes.
Best wins: 88-76 and 66-62 (District Final) over No. 10 Saginaw Arthur Hill, 71-62 over No. 2 Romulus, 73-59 over Bay City Western.
Players to watch: Travontis Richardson (6-2 sr. G – 15 ppg), Julian Henderson (6-2 jr. F – 12 ppg).
Outlook: Like Romulus, Saginaw annually plays a strong regular-season schedule featuring not only tough competition from the Saginaw Valley, but also many of the best from the Detroit area and beyond. Those two losses this season were by five to Arthur Hill – a loss which Saginaw later avenged – and late, by a point, to No. 9 Kalamazoo Central. Five other players average at least eight points per game behind solid backcourt duo Richardson and Henderson.

MUSKEGON HEIGHTS
Record/rank: 20-6, honorable mention
League finish: Does not play in a league.
Coach: Keith Guy, ninth season (189-39)
Championship history: Six MHSAA titles (most recently 1979), eight runner-up finishes.
Best wins: 51-44 over No. 8 Cadillac (Quarterfinal), 64-51 over Rockford, 84-78 over Class A honorable mention Grand Rapids Ottawa Hills, 67-54 over Class C No. 7 Shelby
Players to watch: Juwon Martin (6-5 jr. F – 15.8 ppg, 4.4 rpg), Deshaun Thrower (6-0 soph. G – 11 ppg, 4.2 rpg, 3.4 apg), Mike Davis (6-4 soph. F – 10.5 ppg, 4.1 rpg).
Outlook: Although Muskegon Heights is seeking its first championship in more than three decades, few teams are more regular guests at Breslin Center. The Tigers are reigning runners-up and also finished runners-up in 2005. They’ve won their District every season under Guy, and also five Regionals including their last three. And this could be just the start on that next championship – the team has just three seniors, but six sophomores including two who start and Davis, a big contributor off the bench.

PHOTO: Lansing Sexton senior guard Anthony Clemmons (right) is back trying to lead the Big Reds to a second-straight Class B championship.