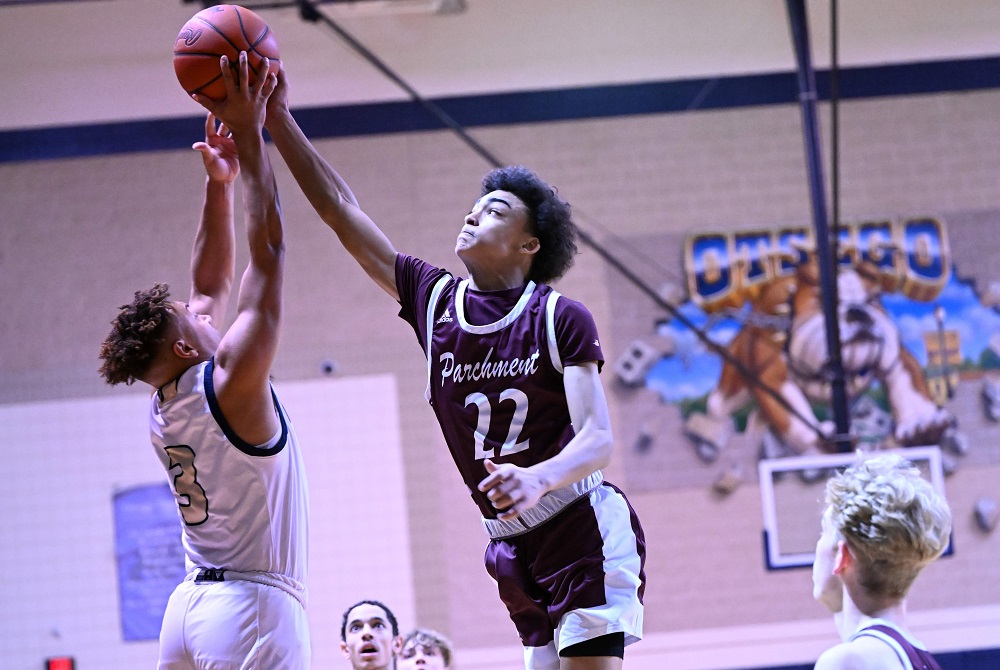 The magic number is down to "3" to earn a trip to East Lansing as Michigan's remaining 128 high school boys basketball teams pull closer to reaching the season's final weekend at Michigan State's Breslin Center.

Rematches won by the team that lost the first time (or two) headlined our District Finals from Friday, and a number of rematches are possible again this week with several highlighted below. Check out “Tracking the Tournament” on MHSAA.com for every matchup from all brackets.

4. Michigan Center 63, Napoleon 47 The Cardinals (17-6) had finished third in the Cascades Conference but defeated champion Vandercook Lake and then runner-up Napoleon (19-3) to claim a Division 3 District title.

To say this Regional is loaded is an understatement. Jesuit was No. 1 in final Division 1 MPR, St. Mary’s was No. 2, Hamtramck No. 9 and North Farmington No. 13. Jesuit won its first two meetings with St. Mary’s this season, but the Eaglets won the most recent 65-43 in the Detroit Catholic League Bishop Tournament. Hamtramck hasn’t lost since Jan. 15, with a pair of wins over River Rouge (17-4) highlighting its run. North Farmington’s losses came to opponents that all won 15 or more games, and the Raiders avenged the most recent by defeating Oak Park 45-36 in a regular-season finale. For common opponent purposes, Oak Park fell to Jesuit in their District Final by just a point.

Tonight’s Regional Semifinals feature a titanic matchup between Ottawa-Kent Conference champions as Green title winner Muskegon takes on White title winner Northview. The Wildcats’ only loss was in their second meeting against Grand Rapids Christian (18-4), while Muskegon has lost only to Kalamazoo Central (14-7) and Ferndale (18-3) – and all three of those opponents also have gone on to win District titles. The Big Reds were ranked No. 10 in final Division 1 MPR. West Ottawa lost five straight to end the regular season before reversing course with a District title run, and Wyoming finished second to Muskegon in the Green and also faced Northview this season.

Cass Tech’s District Final win continued a run of 10 victories over its last 11 games, and the Technicians last week actually avenged two of their regular-season losses by also defeating Detroit Western in a District Semifinal. They next face a District full of similarly hungry programs looking to take a big step. Woodhaven won the Downriver League and Lincoln Park was second despite Lincoln Park winning both of their regular-season meetings. Lincoln Park was 3-12 just a season ago, and Woodhaven is riding high with eight wins over its last nine games and all by double digits. Dearborn has taken a couple of nice steps the last few seasons, and three of its losses were to Kensington Lakes Activities Association East champ Belleville (16-6) as the Pioneers finished second this winter.

Crowell-Lexington is a combined 61-3 over the last three seasons, with COVID-19 ending its 2020 run and an overtime Quarterfinal loss finishing 2021. The Pioneers were first again in the Blue Water Area Conference and Richmond second, but Croswell-Lexington won the second meeting Feb. 22 only 56-54. To set up a third, the Pioneers will have to get by another league champion in the Flint Metro League Stars’ Goodrich, which avenged a late loss to Lake Fenton by defeating the Blue Devils by 11 in their District Final. Richmond takes on Notre Dame Prep, which also had a bit of a rough end to the regular season – facing some of the state’s top teams with a loss to Goodrich during that stretch – but the Fighting Irish came back to edge Warren Michigan Collegiate (15-5) by a point in their District Final.

On opposite sides of this bracket sit No. 5 Parchment and No. 8 Benton Harbor, Parchment seeking its first Regional title since 2000 and Benton Harbor its first since 2018 when it went on to win the Class B championship. Parchment’s only defeat was to Schoolcraft (20-2), while Benton Harbor lost only to Muskegon (see above) and Detroit Edison (16-6) – all three of those opponents are still playing this week. Parchment first must get past Edwardsburg, also a league champion. Benton Harbor opens with Holland Christian, which tied for second in a power-packed O-K Blue and suffered all of its losses to opponents that won 16 or more games this winter.

Unbeatens Onsted and Williamston make for one of tonight’s premier matchups, in any division, with Williamston playing only one single-digit game this season and Onsted only three. Williamston last won a Regional title in 2018, and Onsted is seeking its first since 1983. On the other side, Marshall shared the title in an Interstate 8 Athletic Conference that produced four teams that won at least 14 games. Lansing Catholic defeated Division 1 Holt on the way into the playoffs and then the two teams that finished ahead of the Cougars in the Capital Area Activities Conference White – champion Ionia and runner-up Lansing Sexton – on the way to the District title.

Schoolcraft and Watervliet both shared Southwestern Athletic Conference divisional titles but haven’t seen each other this season, although they have three mutual opponents. Schoolcraft hasn’t lost since Dec. 28, including handing Parchment (see above) its only defeat. The Eagles open with Lawton, which finished third in Watervliet’s SAC Lakeshore division. Watervliet faces Bronson, which finished fifth in a competitive Big 8 Conference and is riding an eight-game winning streak.

Reigning Division 3 champion Beecher has been a favorite to repeat all season, ranked No. 2 in final Division 3 MPR and with its only losses to Division 1 Grand Blanc (17-5) and Detroit Martin Luther King (19-3). The Bucs are coming off a 31-point win over Reese (18-3) in their District Final. Hemlock has seven losses, but six of them were by a combined 17 points – or just under three per defeat – and they avenged one with an 18-point win over Ithaca in last week’s District Final. On the other side, Bad Axe will see Marlette for the second time in two weeks after winning the first meeting by 18. The Hatchets’ only losses were to Reese.

Menominee entered the postseason as the No. 1 team in overall Division 3 MPR with its losses to teams that have at least 18 wins and are still alive in their respective divisions. The Maroons actually defeated Escanaba (18-4) twice to finish first in the Great Northern Conference before losing their third meeting, and they are seeking their first Regional title since 2008. Westwood also is a league champion, from the Western Peninsula Athletic Conference East, and is seeking its first Regional title since 2016. Benzie, winner of the Northwest Conference, is seeking its first Regional title since 1997 after emerging from one of the strongest Division 3 Districts in the state, with Harbor Springs one of the surprise District champs after upsets of St. Ignace (15-6) and East Jordan (13-9) last week.

Ellsworth is seeking its first Regional title since 2009, NMC its first since 2003 and St. Mary its first since 1950. Frankfort has more recent history playing in the late stages of this tournament, finishing Division 4 runner-up in 2019. The Panthers represent the strong Northwest Conference won by Benzie Central (see above), but NMC did win their Feb. 26 meeting 61-49 and claimed the title in a similarly Division 3-heavy Highland Conference. Ellsworth won the Northern Lakes Conference, with its two most recent losses to Division 3 teams. St. Mary as an independent has played a variety of schools all over the state and has wins over Ellsworth (71-63) and Frankfort (64-38), with three of its four losses to Division 3 schools and the fourth to Rudyard (21-1).

Ewen-Trout Creek finished second in overall Division 4 MPR, with North Central No. 4 and Munising No. 12. All three are league champions. Ewen-Trout Creek owns a big win over Lake Linden-Hubbell from a month ago and also a one-pointer over Menominee (see above) from March 1, but the Lakes are riding a six-game winning streak. North Central and Munising meet again after the Jets won their Feb. 23 game 59-48 and Munising won the rematch March 3 64-43. North Central’s only other losses were to Menominee, with Munising’s other defeat to Rudyard.

All four finished among the top 24 in Division 4 MPR – with Genesee Christian No. 7, Ubly No. 11 and Everest No. 13. Genesee Christian has three losses from either Beecher or Flint Hamady, which also advanced to this week in Division 2, and the Soldiers defeated Everest 55-50 on Jan. 29. Ubly won the Greater Thumb Conference East with all four of its losses to Division 3 teams that won 14 or more games, and the Bearcats earned a 69-44 win over another league champ Kinde North Huron to finish last week’s District run. This will be the third meeting between Everest and Cardinal Mooney, with the Mountaineers winning the first two by two and then three in overtime, respectively. Everest also has a two-point win over annual contender Southfield Christian.

PHOTO Jalen Kampen (22) gets his hand on a loose ball during Parchment's 58-55 win over Otsego to clinch a Division 2 District title Friday. (Photo by Gary Shook.)