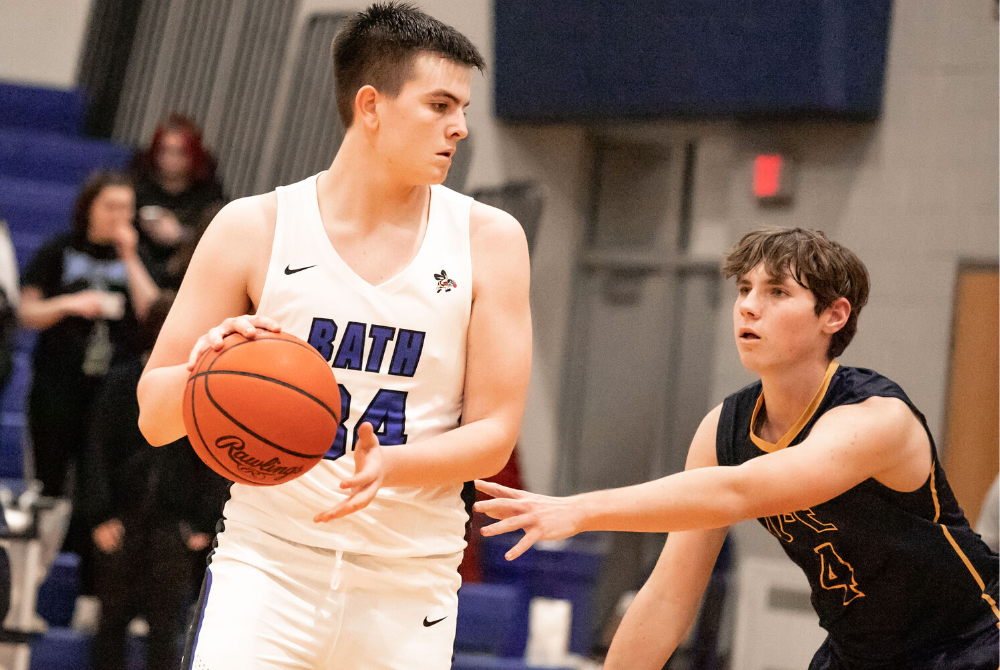 Showcase matchups began quenching fans’ thirst for the new season last week, with more on the way, and league play already is ramping up as we embark on a four-month journey – much different than last season’s two-month sprint.

Boys basketball season began the way it’s meant to begin, and no one will be taking that for granted.

Every Monday with “Breslin Bound” we’ll take glances at five scores that especially jumped out from the previous week, provide snapshots of two teams in each division to watch as the winter progresses, and then give a glimpse of five intriguing matchups on the schedule during the week to come.

1. Detroit U-D Jesuit 51, Detroit Martin Luther King 42 These two are both expected to be in the Division 1 championship mix again, as usual, making this a game that might be recalled when March rolls around.

2. Bloomfield Hills Brother Rice 86, Grand Blanc 68 The Warriors opened with an impressive win over the reigning Division 1 champion, putting up what would’ve been a season-high points total last winter.

3. Freeland 80, Bridgeport 51 Although these Tri-Valley Conference foes did split last season, Bridgeport is coming off a run to the Division 2 Semifinals.

4. Grand Rapids Catholic Central 50, Grand Rapids Christian 45 The reigning Division 2 champion didn’t lose a game last season but got an immediate test from the Eagles in this opener.

5. Harrison 40, Beaverton 38 Harrison finished seventh and Beaverton was undefeated in winning the Jack Pine Conference last season; this avenged 29 and 39-point losses by the Hornets.

Bay City Central (2-0) The Wolves are making an early push for one of the most interesting potential turnarounds this winter. The finished 2-12 last season, and they’ve already equaled that success. And it came with plenty of excitement – Central opened with a 63-61 win over Midland Dow and followed with another close finish, 51-49 over Tawas.

Okemos (2-0) After a rare down season – finishing 3-7 with a pair of overtime losses and two more defeats by five or fewer points – Okemos is off to a fast start reestablishing itself as a contender in the Capital Area Activities Conference Blue. The first step was a 63-51 opening-night win over a Howell team coming off a District title, and the next was a 53-37 victory over DeWitt.

Onsted (3-0) The Wildcats are coming off two straight 14-win seasons, and they couldn’t have gotten off to a better start last week. All three wins were by double digits – 69-56 over Michigan Center, 68-38 over Hanover-Horton and 69-26 over Jonesville – and Hanover-Horton made the Division 3 Semifinals last winter, after defeating Michigan Center in Regional play.

Richmond (3-0) The Blue Devils joined Onsted among 12 teams statewide to start 3-0 last week, a great bounce-back after going 4-6 last season with six games canceled. This start is more reminiscent of when the team went 18-4 in 2019-20 – except last week Richmond also got a win over Fraser, 51-49, to go with victories over Marine City and Cardinal Mooney.

Warren Michigan Collegiate (2-0) After missing last season’s Quarterfinals by a one-point loss to Detroit Loyola, Michigan Collegiate opened in a big way last week. The Cougars downed Detroit Mumford by 30 and then defeated Ecorse 72-45 at the Horatio Williams Tip-Off Classic. A Motor City Roundball Classic matchup Dec. 27 with Detroit Renaissance could be telling before Charter School Conference play begins. (UPDATED Jan. 31, 2022; this originally appeared under Division 3, but Michigan Collegiate is in Division 2.)

Holton (2-0) Even with last season shortened, Holton has upped its win total each of the last four from six to 10 to 13 to finishing 15-6 last winter. The Red Devils got started on attempting to repeat as champions of the Central State Activities Association Silver with a 46-28 win over Morley Stanwood on Friday, after opening with a 16-point win over Howard City Tri County.

Lake Linden-Hubbell (2-0) The Lakes play in a strong Copper Country division of the Copper Mountain Conference which features primarily Dollar Bay and Painesdale Jeffers as well. But Lake Linden-Hubbell will try to work its way into the race and got a solid jump on bettering last season’s 7-9 overall finish with a 39-34 win over Hancock and more sizable victory over Baraga.

New Buffalo (2-0) The Bison are coming off a District title and off to a fast start. They held on for a 77-73 win over Division 1 Sturgis to open, and then won big against Covert to kick off the Berrien-Cass-St. Joseph Conference White schedule. New Buffalo was runner-up in the league and 13-4 overall last season.

Tuesday – Traverse City St. Francis (0-0) at Charlevoix (1-0) – The Lake Michigan Conference race gets going right away, with the reigning champion Rayders taking on one of last season’s co-runners-up.

Thursday – Orchard Lake St. Mary’s (2-0) at Clarkston (2-0) – This is a rematch of a Division 1 Regional Semifinal, won by the Eaglets 38-37 on the way to reaching last season’s Quarterfinals.

Friday – Detroit U-D Jesuit (3-0) at Ferndale (0-1) – Jesuit lost only one game last season, a Division 1 Regional Final, and Ferndale is coming off a run to the Division 2 Semifinals. 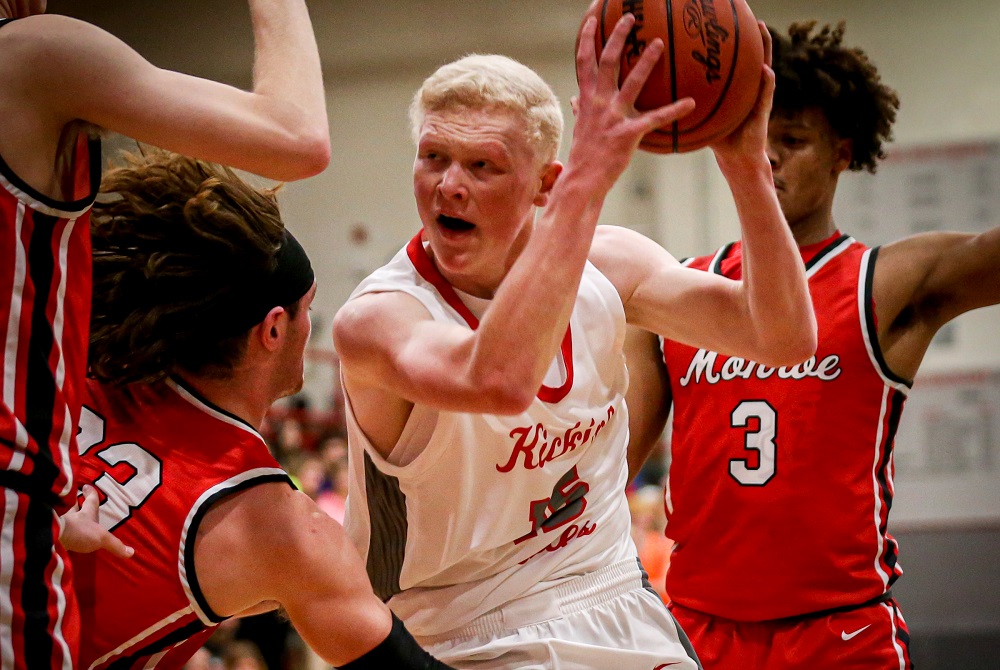 TEMPERANCE – The Bedford Mules are kicking up a special boys basketball season in southeast Michigan.

Temperance Bedford is off to a 10-1 start, the best for the school in a decade. Third-year coach Jordan Bollin is happy to bring a winner to his alma mater.

“Bedford has had good teams here and there and good players and coaches, but it never seemed to be anything that was sustained,” Bollin said. “I knew it was going to be a challenge.”

“I talked it over with my wife, with the athletic director, with (assistant coach) Mark Hubbard,” Bollin said. “I always, in the back of my mind, thought that I would want to come back to Bedford and coach one day. I wanted to do it while I was still relatively a young coach who still had the passion for all of this. It’s the right time.

“I felt like, leaving Dundee, I had an opportunity to build something myself.”

Wrestling has been the winter sports king at Bedford for decades as the Mules spent years at the top of Class A/Division 1 wrestling circles. The boys basketball team has enjoyed its moments, such as a three-year span when it went 18-6, 18-5 and 14-8 across 2012-2014, but there have been down years, too. Various coaches have tried their hand at the helm, including former NBA player Dennis Hopson.

Bollin himself played for coach Bill Ryan, who led the boys team for seven years but has found ultra-success with Bedford’s girls basketball program.

Bollin knew that when he took over the varsity, he wanted to incorporate the entire program.

“No program is one coach,” he said.

He brought multiple assistants with him from Dundee, including longtime Monroe County coach Hubbard, a Bedford graduate, and former head coach in the county himself. The two have formed a bond.

“We talk every day on the phone before practice,” Bollin said. “We go to lunch once or twice a week. He’s a mentor and someone I talk to all the time.”

Bedford has posted wins over a variety of teams this season, from Southeastern Conference teams like Dexter and Monroe to Ottawa Lake Whiteford, Adrian Lenawee Christian and Stockbridge. Ten of the Mules’ final 11 games are against SEC schools, including two against 8-3 Saline.

Bollin knows the toughest is yet to come.

“We get Ann Arbor Huron at home,” he said. “We lost to them by three on the road. We had the ball, down two in the final seconds and had the ball and were called for a travel. It was close.”

Six-foot-7 Andrew Hollinger is the team’s top scorer and rebounder. Four years ago, he played five games on the varsity, then was a starter in Bollin’s first season. He’s now closing in on 1,000 career points and is one of the best rebounders in southeast Michigan.

“He’s phenomenal,” Bollin said. “He plays so hard, and he’s a great kid. He’s a 4.0 student and very humble. You’ll never hear him talk about himself; it’s always about the team.”

While he’s proven to be a great scorer and free throw shooter this season, Hollinger is also a relentless rebounder.

“I’ve always been one of the tallest out on the court, so I know that I can really use that to my advantage in order to rebound,” he said. “Once the shot goes up, I try to chase down the ball or box someone out in order to give my team the chance to get the ball back.”

“I use him as an example to the other kids all of the time,” Bollin said.

Twice this season Hollinger has set the school record for most consecutive free throws made in a game. He went 15-for-15 once and 16-for-16 another time. Hollinger averaged a double-double last year at 18.2 points and 10.8 rebounds and has topped those numbers through 11 games this season. 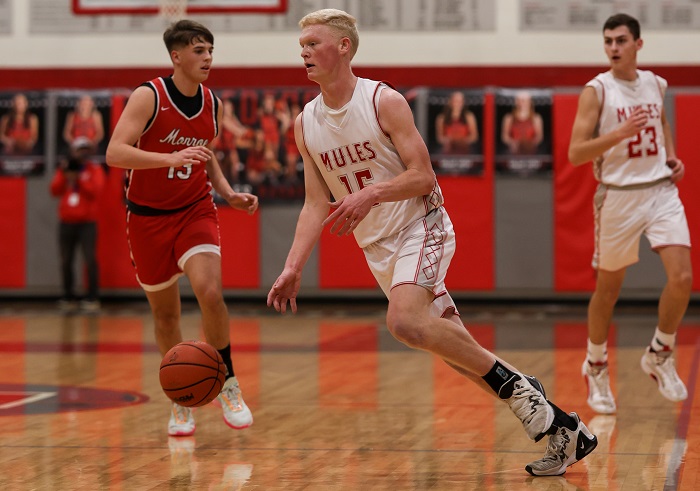 Hollinger is one of eight seniors on the roster. Like Bollin, he’s a homegrown talent, having made his way up from the Bedford Community Education program in the fourth grade to middle school, JV and varsity.

“I fell in love with basketball when I played in the local community ed program,” he said.

Hollinger said all of the seniors had a feeling this was going to be a great season.

“I think the success from our team comes from how hard we play every game and how much experience we have,” he said. “We knew coming into the season that we were in pretty much every game the season before and just had to find a way to start winning games.”

Bedford won six games during the COVID-19 shortened 2020-21 season and four a year ago – losing several games that came down to the final minute. Bollin has matched the win total in those first two years at Bedford in two months.

Ironically, Bollin said, it was the 2020-21 season during which most of this year’s seniors learned to play varsity basketball.

“We had so many games where we had players out for COVID that we had to bring a lot of them up to the varsity to play,” he said. “A lot of the seniors this year got a ton of playing time that year.”

The other current seniors include Griffin Wolf, Tommy Huss, Jimmy Fackelman, Simon Eighmey, Caleb Kochendoerfer, Evan Campbell, and Leo Wagenhauser. They are complimented by a couple sophomores and juniors plus freshman Carsen Behnke.

Hollinger is hopeful the first-half success will continue.

“We all believed in each other in the offseason, and that belief still continues through the start of the season,” he said, deflecting any attention from himself. “I love how basketball is a team game and how you need the whole team to be playing hard in order to win. It’s not just about one person, but it’s about everyone.”

Bollin said he could sense this summer that this season had the makings of being something special.

“I thought we’d have a nice season, but, no, I wasn’t expecting 10-1,” he said. “But, in the summer, I knew when everyone was there and together, we were tough to beat.”