No school for the next two weeks hardly means no basketball for many teams across the state.

Holiday showcases, classics, tournaments, etc., canceled last season because of the COVID-related late start are returning to close this calendar year, and they’ll surely clue us in more on the teams to watch once we return and turn to 2022.

3. River Rouge 61, Warren Fitzgerald 59 Rouge (3-0) won three times last week, two times by a bucket, beginning with this victory and followed by a 62-61 win over Belleville.

Ann Arbor Huron (3-0) Last season’s Division 1 runner-up is up to a combined 43-2 since the start of 2019-20, with a couple of solid and close wins last week. After opening the season Dec. 10 with a 15-point victory over Ypsilanti Lincoln, the River Rats defeated Ann Arbor Skyline 48-42 and Saline 41-39 – the only losses for those latter two opponents so far.

Hamtramck (4-0) The Cosmos are now a combined 35-6 going back to the start of the 2019-20 season and coming off a Michigan Metro Athletic Conference Black championship last winter. So far, so good this season as well, with last week featuring a 54-52 overtime win over Canton and an 81-54 victory over Wyoming Godwin Heights at Cornerstone University. The first matchup with league rival River Rouge is Jan. 28.

Olivet (4-0) The Eagles returned to their usual successful ways with a 13-3 run last winter, and they appear on that path again. The 59-32 opening win over Union City remains the Chargers’ only defeat, and Olivet followed that up with a 55-24 win over a Hanover-Horton team coming off a run to the Division 3 Semifinals. All four Eagles victories have come by at least 20 points.

Bad Axe (5-0) The Hatchets closed last season’s 12-3 showing with a District title, and expectations should be growing as four of five wins have been by at least 17 points. The only losses last winter came to league rival Reese – the Rockets also won the Regional matchup – and those teams meet for the first time this season Jan. 12.

Vandercook Lake (5-0) The Jayhawks appear ready to take the next step after winning four games two seasons ago and finishing 9-9 last winter. A 56-53 win over Homer on Dec. 10 avenged an 18-point loss to last season’s Big 8 Conference champion, and Thursday’s 70-56 victory over Michigan Center avenged a pair of 2020-21 defeats.

Britton Deerfield (3-0) After two straight winning seasons, Britton Deerfield dropped back to 6-11 last winter. But the Patriots look to be putting that quickly behind them with three double-digit wins to start. Last week’s 68-56 win over Morenci was the Bulldogs’ lone defeat.

Hillman (3-0) Last season’s 12-8 finish broke a string of two sub-.500 seasons, and the Tigers are off and running again. Two of three wins so far have avenged losses from last winter – the 39-37 victory over Rogers City in the opener after Hillman lost last season’s meeting by a point, and a 65-31 win over Alcona last week after the Tigers lost last winter’s meeting by 12. 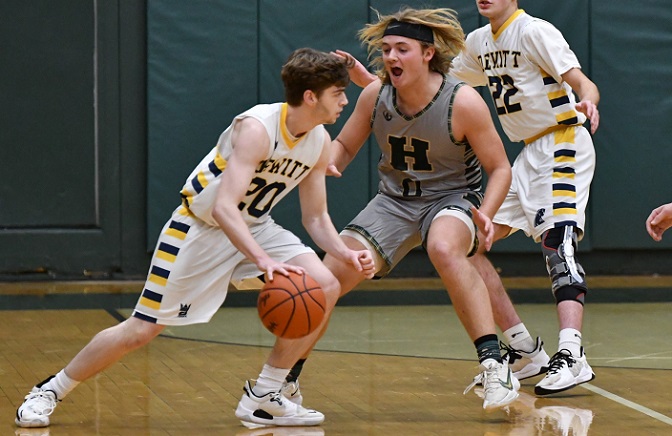 Wednesday – Parchment (5-0) vs. Grand Rapids West Catholic (3-0) at Cornerstone University – These two will face off for the Holiday Tournament Red championship.