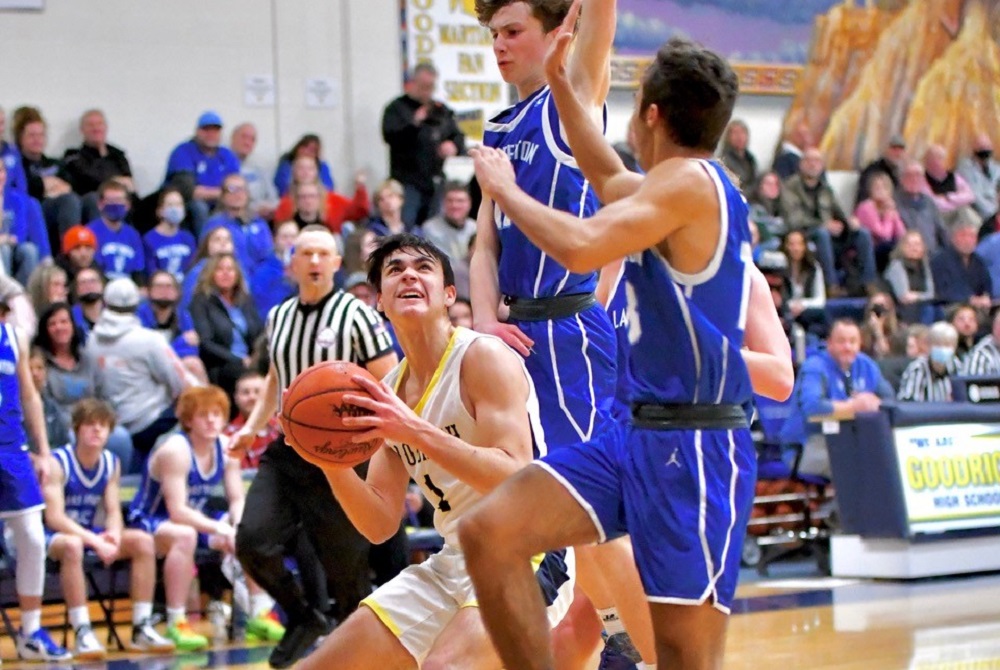 Four weeks remain this boys basketball regular season, and some important dates are coming up.

In two weeks, Feb. 21, the MHSAA will announce the formula for drawing this season’s District tournaments.

On Feb. 27, Districts will be posted with the top-two seeded teams on opposite sides of those brackets.

On March 7, those Districts will begin play and the MHSAA Tournament will be underway.

For a more detailed explanation of the seeding process, click here. Much still can change – three league tournaments begin this week and other conferences will be decided over the next few, meaning plenty of MPR-tilting matchups are ahead.

1. Ferndale 57, Muskegon 46 The Eagles (10-2) moved up to the No. 1 spot in Division 2 MPR after handing Division 1 Muskegon (11-1) its lone defeat during Saturday’s Showcase at Cornerstone University.

2. Grand Rapids Northview 68, Bloomfield Hills Brother Rice 64 (OT) The Wildcats (13-0) had gained steam as one of the Grand Rapids area’s best, but picked up some statewide clout by getting past the Warriors (9-4) at Cornerstone.

3. Detroit Edison 71, Benton Harbor 51 The Pioneers (9-5) have won six straight and followed up a two-point victory over Detroit Renaissance on Feb. 1 by handing the Tigers (12-2) their second loss, also at Cornerstone.

4. Michigan Center 68, Vandercook Lake 66 In avenging an earlier 70-56 loss, the Cardinals (8-4) pulled Vandercook Lake (11-1) into a first-place tie in the Cascades Conference (with Napoleon) and pulled within a half-game of the co-leaders.

5. Whitehall 55, Ravenna 41 These two are tied atop the West Michigan Conference both at 8-4 overall after Ravenna had won their first meeting by 24 in December.

Grand Rapids Northview (13-0) The Wildcats had hung around the top of the Ottawa-Kent Conference White the last four seasons, but enter this week with a one-game lead in the standings and coming off one of its best wins this season over Brother Rice (see above). Northview is followed in the White by Grand Rapids Christian, with the rematch Tuesday after the Wildcats won the first matchup 64-51 on Jan. 11 – which avenged a 19-point loss from a year ago. Brother Rice was the only opponent to get closer than 10 points this winter.

Oak Park (10-3) Five of seven teams in the Oakland Activities Association Red have winning records, and Oak Park is one of three with 10 wins after last week’s over North Farmington (10-3) and West Bloomfield. The Knights were 5-8 last season and are seeking their first above-.500 finish since 2018-19. They’ll get opportunities to avenge losses to Clarkston (8-4) and Ferndale (10-2) later this month, and they also own wins over Warren Lincoln (11-4) and Ypsilanti Arbor Prep (10-4).

Ferndale (10-2) After winning the OAA Red last season and reaching the Division 2 Semifinals, Ferndale returning to the top of the league isn’t a surprise. But the Eagles also are No. 1 in Division 2 MPR despite cancellations against multiple high-caliber opponents, a testament to the competition they’ve seen and defeated. The losses were to Division 1 Warren De La Salle Collegiate (10-4) and Orchard Lake St. Mary’s (11-3), and Ferndale has wins over Detroit U-D Jesuit (8-4), Port Huron Northern (10-3), North Farmington and Oak Park (both 10-3) and now Muskegon (11-1), as noted above.

Williamston (15-0) With last week’s 66-37 win over East Lansing (11-4), the Hornets can make a strong argument as the Lansing area’s top team – and no opponent locally or from afar has gotten closer than 15 points of catching the Hornets this season. They lead the Capital Area Activities Conference Red as they pursue what would be a 10th-straight league title, and they also reached the Regional Finals last year. Additionally, Williamston owns victories over North Farmington (10-3) and Ann Arbor Skyline (9-4) this winter.

Ishpeming Westwood (10-2) The Patriots are in the hunt for what would be a first league title in at least a decade as they and Negaunee (9-4) are top contenders in the Western Peninsula Athletic Conference East. Westwood won the first matchup and lost the second between the two and also has a pair of solid wins over Iron Mountain (8-3) highlighting a first half that saw all 10 victories come by double digits.

Menominee (13-1) The Maroons are undefeated against in-state opponents and need one more victory to clinch a share of the Great Northern Conference championship – which would be a first since 2015-16. A triple-overtime win over Marquette on Friday was the latest highlight, and Menominee also handed Powers North Central (12-1) its lone defeat and picked up wins over Petoskey (8-5), Escanaba (7-4) and Kingsford (8-4) among others.

Bellevue (10-1) The Broncos are working toward a Southern Central Athletic Association West title, their only loss nonleague by five at the end of December to Bronson. Hillsdale Academy (8-2) in early December came within nine; another opponent came within 11 and the other eight wins were by at least 20 points including over Colon (10-2). A rematch with the Magi on Feb. 16 and Climax-Scotts (7-4) on Feb. 25 are possibly the toughest tests left as Bellevue looks to run its league championship streak to seven.

Powers North Central (12-1) The Jets also have been big winners all season, with all of their victories by double digits and that only loss to Menominee (see above) – with a rematch against the Maroons set for Tuesday. North Central also has a pair of games coming up with Munising (13-1) as it looks to prep for the playoffs. The Jets already have swept the regular-season series with Carney-Nadeau, which knocked them out of the District a year ago.

Monday – Port Huron Northern (10-3) at St. Clair Shores Lake Shore (13-2) – Northern won last week’s first meeting 59-41 to clinch a share of the Macomb Area Conference Blue title, and the Huskies will either claim the championship outright or share it with Lake Shore depending on this result.

Tuesday – Detroit U-D Jesuit (8-4) at Orchard Lake St. Mary’s (11-3) – With one fewer league loss, Jesuit has a half-game lead over the Eaglets in the Detroit Catholic League Central and won the first meeting 65-61.

Tuesday – Goodrich (12-1) at Flushing (11-1) – The leaders of the two Flint Metro League divisions face off in nonleague play.

Friday – Vandercook Lake (11-1) at Napoleon (11-1) – This could end up the decider in the Cascades Conference as they are tied with one league loss apiece; the Jayhawks won the first meeting 61-54.

PHOTO Goodrich defeated Lake Fenton 73-59 on Jan. 24. They are in first and second, respectively, in the Flint Metro League Stars. (Photo by Terry Lyons.)