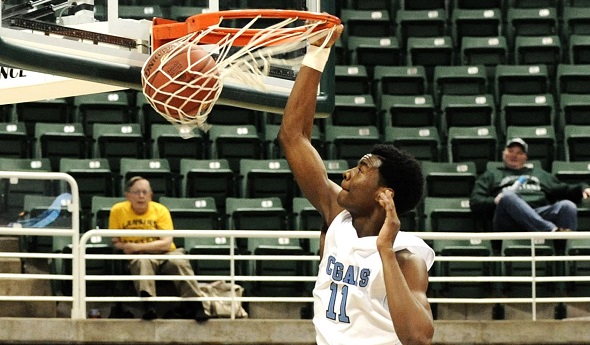 Picking the teams to beat in the MHSAA Boys Basketball Tournament has been particularly difficult this winter. It appears there are plenty of favorites to go around.

We’ll begin to find out if that’s true when Districts begin tonight all over the state – and know for sure when we see which teams end up at Michigan State’s Breslin Center for Finals weekend on March 20.

Follow as the teams advance on MHSAA.com. Below are some that could reach the final 16 lines of those brackets.

Detroit Pershing (18-2) – It’s hard to believe Pershing hasn’t won Class A since 2009 since the Doughboys always seem to be in the mix. They came back from a two-point loss to Detroit Southeastern at the end of January to beat Southeastern – the reigning Class A runner-up – 57-56 in the Detroit Public School League Tournament Final. Pershing also has impressive wins over Ypsilanti, Detroit Douglass (twice) and Illinois’ Chicago Orr and Morgan Park. Center Justin Tillman, a 6-foot-7 force in the paint, is a Mr. Basketball candidate.

Detroit U-D Jesuit (17-2) – The Cubs tied for the Detroit Catholic League regular-season championship but cruised through the tournament with wins of 50, 28 and 16 points, respectively. They followed with a 10-point win over reigning Class A champion Romulus. U-D Jesuit would win its first Regional title and Quarterfinal on the way if it makes it to Breslin. Considering that could mean defeating both Pershing and Southeastern, it's a tall task that would be considered an even more impressive accomplishment.

Muskegon (20-0) – This is a football school, right? Not entirely anymore given the Big Reds’ basketball success over the last two seasons. Muskegon has improved from 11-11 in 2011-12 in 19-7 and a Quarterfinal run last season to perfection heading into this tournament. Guard Deshaun Thrower, the quarterback that led the football team back to Ford Field this fall, is a Mr. Basketball candidate. Teammate Deyonta Davis could be in 2015. Aside from winning the O-K Black title, the Big Reds have impressive wins over Saginaw Arthur Hill, Mount Clemens and Illinois’ Chicago Curie among others.

Ypsilanti (18-2) – The Grizzlies' only Southeastern Conference loss came to rival Ypsilanti Lincoln in mid-January and was avenged with a 12-point win a month later. Ypsilanti also fell to Pershing by three in December, but owns an eight-point win over a strong Detroit Southeastern team. Ypsilanti won its first Regional title last winter since 1981, but looks to have a good shot at making it two in a row, although the road could include Lincoln again plus Romulus and tough Westland John Glenn among others. Senior center Jaylen Johnson is a mobile 6-9 force and Mr. Basketball candidate.

Detroit Country Day (13-7) – It’s nearly impossible to not mention the reigning Class B champion, even if the Yellowjackets’ record is a bit down from the usual at the end of the regular season. But consider that Country Day is on an 8-1 run, its losses are against some strong opponents including Detroit Consortium and Class A Romulus and Walled Lake Western, and it features Mr. Basketball candidate Edmond Sumner, a 6-5 guard and scorer. Oh, and Country Day avenged that Consortium loss with a one-point win three weeks later.

Grand Rapids South Christian (19-1) – The Sailors have been MHSAA title contenders in seemingly every sport lately, and that’s grown to include boys hoops. After finishing 13-9 a year ago, South Christian fell this year only once, by three points, to O-K Gold runner-up Wayland. South Christian then won the rematch by 10 and also owns nice wins over Holland Christian and East Kentwood – although undefeated Wyoming Godwin Heights (see below) is a likely District opponent this week.

Jackson Lumen Christi (19-1) – The Titans have been building toward a run at their first Semifinals appearance since 1975 after reaching the Quarterfinal last season and falling in that game by only three points. Their only loss this winter was by five two weeks ago to Class A Lansing Waverly, a team Lumen Christi beat by seven earlier this season. The Titans also this season avenged 2012-13 losses to Flint Powers Catholic and rival Jackson, beating the latter twice.

Wyoming Godwin Heights (20-0) – The Wolverines haven’t lost since last season’s Class B Semifinals at Breslin Center. They beat solid Holland to cap the regular season after romping through the O-K Silver with only three of 14 games decided by single digits. But any potential run will have to go through Grand Rapids South Christian (see above) in the District.

Boyne City (18-1) – The Ramblers haven’t advanced to the season’s final week since 1990, but have looked up the challenge cruising through the Lake Michigan Conference undefeated after finishing 11-11 overall a year ago. The tough part this week likely will come in leading off the District tonight against league rival Elk Rapids, which Boyne City beat by three and then 12 earlier this season. Charlevoix also could be a tough out despite its 6-13 record – the Ramblers beat the Rayders by only four and six (in overtime) during the regular season.

Detroit Consortium (16-2) – Consortium has won Regional titles two of the last three seasons and just missed making it farther a year ago, falling by two in the Quarterfinal to eventual Class C champion Flint Beecher. The Cougars’ slate of wins this season includes many of the best from the Detroit PSL, including Southeastern and Douglass, plus wins over Class A Saginaw, Romulus, Saginaw Arthur Hill, and Class B Country Day. The lone losses were in a rematch against Country Day, by a point, and by two to Class A contender Pershing.

Mount Clemens (19-1) – It’s fair to call the Battling Bathers the favorites since the start of this season, or at least one of a few, and they haven’t fallen below that expectation. Mount Clemens won the Macomb Area Conference Gold title by four games after taking on a number of Class A schools including Detroit Martin Luther King and Grand Rapids Ottawa Hills during the season's first month. Only undefeated Class A Muskegon was able to give the Bathers a loss this winter.

Negaunee (19-1) – The Miners have reached at least the Quarterfinals the last three seasons and fell to Laingsburg in last season’s Semifinal by only two points. The only loss this season came in December to Class A Marquette, and was avenged with a six-point win three weeks ago. Negaunee played the biggest and many of the best in the Upper Peninsula and handed rival Ishpeming its only two losses in the Mid-Peninsula Athletic Conference – which Negaunee won.

Bellaire (20-0) – The Eagles faced only a few bumps in rolling to a flawless regular season record, needing a two-point win over second-place Mancelona and a three-pointer over third-place Onaway on Thursday to claim the Ski Valley Conference title outright. But perfection is nothing new to this bunch; Bellaire’s only loss last season came to Frankfort in the Regional Final, and the Eagles were perfect until the Quarterfinal in 2011-12.

Peck (18-0) – The Pirates’ success during their 8-player football championship run apparently is carrying over to basketball. Or maybe it was the basketball team’s success that carried over to football – the Pirates’ hoops team made its Regional Final last season before falling to eventual MHSAA Semifinalist Lansing Christian. Peck’s three single-digit games this winter came against rival Kingston and Class B Armada and Richmond.

Powers North Central (20-0) – Coming off its first MHSAA Semifinal appearance since 1985, North Central has crushed most of its competition this winter with 11 wins by 30 or more points. Only Skyline Conference foe Carney-Nadeau and Munising got within single digits of the Jets, and no opponent did so before February. Carney-Nadeau does also play in the same District, however, after falling to North Central by only a point in their rematch.

PHOTO: Detroit Consortium found the rim plenty during a 66-38 win over Jenison at the Breslin Center in December, and hopes to return to East Lansing at the end of this month. (Click to see more fromHigh School Sports Scene.)