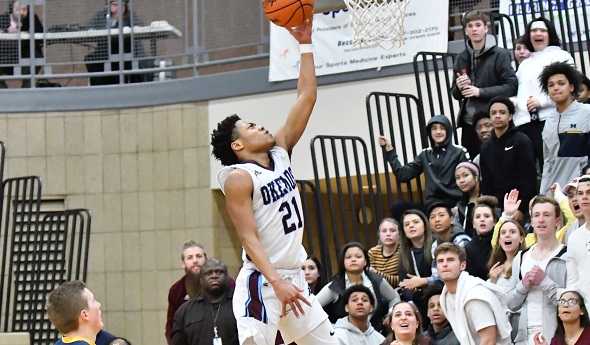 After nearly four months, we’ll know by the end of tonight which 16 Michigan boys basketball teams will be “Breslin Bound” this weekend to play for this season’s championships.

We’re already guaranteed at least two new title winners when Saturday’s Finals are done, and there are plenty of storylines as a number of teams reached tonight’s Quarterfinals for the first time in a long time – or first time in their program’s histories.

Our final “Breslin Bound” report of 2018-19 – powered by MI Student Aid – takes a glance at all 16 Quarterfinals, which tip off at 7 p.m. unless noted. All Quarterfinals will be broadcast and viewable with subscription on MHSAA.tv. Come back Wednesday night for a more in-depth look at our 16 finalists as they head into this weekend.

After a rare down season a year ago, Saginaw is back at the Quarterfinals for the fourth time in eight seasons under coach Julian Taylor. Howell, coming off its first Regional title since 2014, follows talented senior guard Josh Palo (17.7 points, 4.8 rebounds, 3.7 assists per game).

Lincoln freshman Emoni Bates has been perhaps even more exciting than anticipated, with game-winning shots in both of last week’s Regional wins just the latest highlights as he’s led the team to its first Regional title. King rebounded from two losses to end the regular season to win a District title for the second straight season and first Regional title since 2000.

Jesuit will play in a Quarterfinal for the sixth straight season, this team with senior forward Daniel Friday (16.9) leading an attack with four scorers averaging at least 9.6 ppg. Roseville also lost its final two games of the regular season, but has won all five of its postseason matchups by at least 11 points on the way to its first Regional title since 1952.

Led by junior guard Ja’moni Jones (17.6 ppg), East Kentwood has bounced back from four straight losses to end the regular season and defeated a pair of league champions last week in Muskegon and Hudsonville to reach the Quarterfinals for the first time since 1998. Okemos held off DeWitt for the third time this season in their Regional Final to advance to the final week for the first time since 2012. Senior Evan Thomas (17.3 ppg) is the lead scorer.

Alma stunned previously-undefeated Bridgeport in a Regional Semifinal last week and will play its first Quarterfinal since 1999. Senior guard Camden Sutherland (11.1 ppg) is the high scorer for a balanced attack. Ludington, the Class B runner-up two seasons ago, lost five of its last six regular-season games but rebounded by winning a third straight District title. Senior Joshua Laman (15.8 ppg) leads in most statistical categories.

The Sailors are coming off their first Regional title since winning the Class B championship in 2005, thanks to a two-point win over Grand Rapids Catholic Central on Thursday. The Sailors have their share of 3-point aces, and senior guards Luke Schrotenboer and Peyton Vis both score between 13-14 ppg. South Christian won its Dec. 21 meeting with Unity Christian 63-61, but the Crusaders are riding high after downing 2018 Class B champ Benton Harbor to win their second Regional title in four seasons. Senior TJ VanKoevering (13.8 ppg) is the leading scorer and rebounder.

Iron Mountain won a Regional title for the second straight season and is now a combined 48-2 over the last two. Junior guard Marcus Johnson and sophomore guard Foster Wonders are both scoring just above 23 points per game. Meridian is also playing in a Quarterfinal for the second straight season, entering tonight a combined 44-5 over the last two winters after handing previously-unbeaten Oscoda a 21-point defeat in the Regional Final.

This Quarterfinal pits the Class C champions of the last two seasons, both with similar success this season. Reigning champ Edison has wins over Benton Harbor and Canton and is led by senior forward Brian Taylor (16.6 ppg). Beecher has beaten Detroit Renaissance, Grand Blanc and Flint Carman-Ainsworth among others, keyed by junior guard Jalen Terry, and is seeking its fourth MHSAA title in five seasons.

Hanover-Horton will play in its third Quarterfinal over the last five seasons and first since 2016, with its only defeat this winter to Ohio’s Toledo St. Francis de Sales. Junior Luc Laketa scores 14 ppg to lead five averaging at least 9.3. Erie Mason won its first Regional title since 1973 and has wins over league champs Detroit Loyola and Petersburg Summerfield over the last two weeks. Junior guard Joe Liedel pours in 28 points with 5.1 assists per game.

P-W has emerged from winning a league that produced three District champs and then defeated league champions Morley Stanwood and Carson City-Crystal during these playoffs. Senior Andre Smith has helped the Pirates reach the final week for the first time since 2014 by averaging a team-high 14.1 ppg. After going 24-1 a season ago but falling in the Regional Final, Cassopolis has broken through to make its first Quarterfinal since 1989. Senior guard Tyrese Hunt-Thompson scores 22 points per game, and sophomore forward Brayden Saxton adds 18 ppg.

Southfield Christian is the reigning Class D champion and has won 16 of its last 17 games. Senior guard Jon Sanders and junior guard Da’Jion Humphrey both average 16.5 points per game. Genesee Christian is coming off its first Regional title since 2005 and is 17-3 after a slow start in December.

Frankfort fell in its regular-season finale and then won its District opener by just two points in overtime, but has surged ahead to claim its first Regional title since 2015. Senior guard Will Newbold and sophomore guard Jack Stefanski both average 14 points per game. Crossroads won its first Regional title last week, with its only defeat of the season all the way back on Dec. 5 to Manistee Catholic Central. Senior guard Britton Angell leads at 26 ppg.

In its third straight season with at least 22 wins, Bellevue has reached the final week for the first time after claiming its first Regional title. Senior guard Wyatt Waterbury scored 16.4 ppg to lead the way. Tri-unity is a regular at this stage but also back after missing out on the Quarterfinals last season after three straight appearances. Senior forward Bennett Sinner and freshman guard Brady Titus both score 12 ppg to lead a balanced effort.

PHOTO: Okemos junior Noah Pruitt gets to the basket during the Chiefs’ Regional Final win over DeWitt last week at Holt. (Photo by Terry Lyons.)