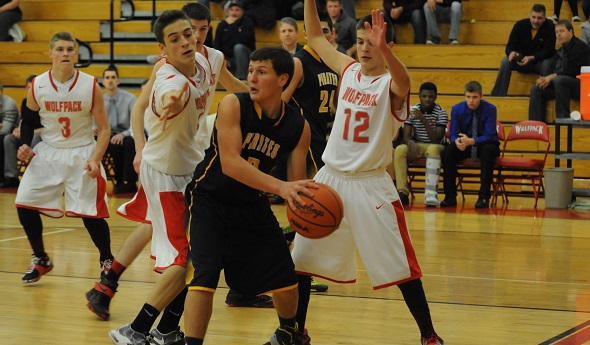 Schools have re-opened for 2015. But there’s plenty to review from the end of 2014 as boys basketball teams get ready for their familiar league schedules.

See below for four teams from each class that stuck out over the two-week break. And check out something new from Second Half – we’ll print by class each Monday a list of the undefeated teams left in Michigan and add in those with one and two losses as the season rolls on and the undefeateds are down to just a few. (Click for this week’s list.)

Ann Arbor Huron (6-1) – The River Rats opened this season with an 80-73 loss to Detroit Henry Ford, but haven’t fallen since; they won games as part of three events over the final two weeks of December, including big over Westland John Glenn (72-53) and Battle Creek Central (88-58).

East Kentwood (5-0) – The Falcons were on the verge last season, finishing 13-8 with five losses by six or fewer points; they’ve arrived this winter, if a 58-57 win over reigning Class A champion Muskegon at the Muskegon Sports Hall of Fame Tournament is an indication.

Walled Lake Western (6-0) – The Warriors are another 6-0 fast starter and built their early run in part by winning the Livonia Franklin Holiday Invitational with a 66-60 win over one-loss Redford Thurston in the championship game.

Gladstone (3-0) – A 1-4 start kicked off an 8-12 finish for the Braves last season, but they’ve reversed directions this winter with Saturday’s 64-62 win over St. Ignace the most impressive of early victories.

Goodrich (5-0) – The Martians boys went a game farther than the school’s stellar girls program last season by reaching the MHSAA Quarterfinals and have made it 12 wins in their last 13 games including a solid 67-65 defeat of Grand Rapids Ottawa Hills on Dec. 30.

Imlay City (5-0) – The Spartans did a final tune-up before beginning defense of their shared Blue Water Area Conference championship by winning their invitational with a 36-34 victory over Marlette in the title game.

New Haven (4-0) – The Rockets' quick start has included wins close (60-57 over Harper Woods Chandler Park) and not so close (76-46 over one-loss Warren Michigan Collegiate to claim their Rocket Classic on Dec. 30).

Hillsdale (5-0) – The Hornets became one of three teams in Class C to open 5-0 by claiming the Pat Paterson/Williams Tournament at Jonesville with victories of 27 and then 62 points; no team has come closer than 12.

Millington (5-0) – The Cardinals’ first of two losses last season didn’t come until the regular-season finale, and they’ve looked similarly impressive early including putting up 101 points in a win over Reese before beating one-loss Vassar 61-45.

Union City (5-0) – The Chargers also have made a quick turnaround from last season’s 8-14 run to open with five wins of 22 or more points this winter.

Akron-Fairgrove (4-0) – The reigning Michigan Summit League co-champion will begin league play Tuesday with a flawless record and three victories by 12 or more points.

Bark River-Harris (4-0) – The Broncos already have proven they can win close with a five-pointer over Rock Mid-Peninsula, a two-pointer over Big Bay de Noc and a five-point victory over Stephenson.

Mio (4-0) – The Thunderbolts look to be contenders in the new North Star League Big Dipper division with three league wins and all four so far by 15 or more points.

Waterford Our Lady (6-0) – The Lakers are the lone Class D team at 6-0 and have yet to allow an opponent closer than 13 points – Novi Franklin Road Christian and one-loss Harbor Beach were the only two to put up that challenge.

PHOTO: Laingsburg (in red) clamped the Pewamo-Westphalia offense in defeating the reigning Class C runner-up 42-34 on Dec. 18. (Click for more from HighSchoolSportsScene.com).