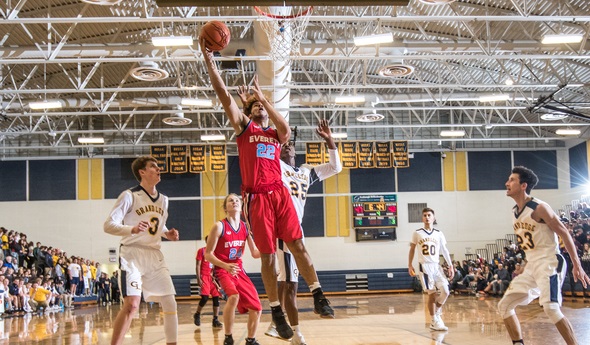 One of the best parts of boys basketball season is how quickly the state’s elite teams begin testing themselves against each other to get an idea where they stand coming into the winter.

We saw plenty of those titanic matchups last week – although the first game to top our “Week in Review” for 2017-18 allowed us to look back more than look forward.

As during last season, the weekly Breslin Bound report – powered by MI Student Aid – will look at five results from the previous week that particularly popped, plus a few teams to keep on your radar during the months ahead and five games during the week to come that you might want to check out.

These reports are based on results and schedules posted for each school at MHSAA.com – to offer corrections, email me at Geoff@mhsaa.com.

2. Canton 65, Belleville 61 – This opener shook Class A quite a bit with Canton losing to Belleville by 23 last year and the Tigers expected to contend for a spot at Breslin this upcoming March.

3. Detroit Cass Tech 84, Flint Beecher 53 – The Technicians are expected to be among Class A contenders after winning 19 games a year ago, and this was a great sign as reigning Class C champ Beecher no doubt will be in that mix again as well.

4. Clarkston 65, Wayne Memorial 55 – The reigning Class A champ got a nice win over another expected contender before finishing the week with a five-point victory in another test, against Flint Carman-Ainsworth.

5. Hazel Park 86, Detroit East English 72 – The Vikings may have taken a step toward joining the elite with a big win over one of the anticipated best from the Detroit Public School League.

Canton (2-0) – The Chiefs opened 0-2 a year ago with losses to Detroit Country Day and Belleville, the teams they beat last week. Canton plays in a Kensington Lakes Activities Association Black with expected favorites Wayne and Westland John Glenn, but showed last week it should be right in the mix after finishing third and 13-8 overall in 2016-17.

Mattawan (2-0) – The Wildcats were 7-14 a year ago and haven’t had a winning season this decade. But they couldn’t have gotten off to a better start, opening with a 55-54 win over Paw Paw after falling to the eventual 18-win Redskins by 16 a year ago.

Essexville Garber (2-0) – The Dukes’ 5-16 campaign last winter ended with seven straight losses including by a basket to Bay City John Glenn in the District. The bounce-back began last week with a 25-point win over Pinconning followed by a 14-pointer over the rival Bobcats.

Detroit Pershing (1-0) – The Doughboys have had three middling seasons since their last 20-win run in 2013-14, but they’re expected to be among the state’s best even as they will play a mostly Class A schedule. Last week’s 81-74 overtime win over 2017 Class D semifinalist Southfield Christian was an impressive way to start.

Ewen-Trout Creek (2-0) – The Panthers’ 6-foot-7 senior Jacob Witt is probably one of the most unknown standout all-around athletes in the state, but he could finish this season with his team making some noise. Ewen-Trout Creek went 14-9 last season and last week avenged a 2016-17 loss to Hancock with a 38-point win.

Rapid River (2-0) – The Rockets not only ended North Central’s streak, but opened with a 56-53 win over Carney-Nadeau, which is coming off a 15-win season. Rapid River was 11-13 last winter after opening with an eight-point loss to Carney-Nadeau and a 53-pointer to the Jets, but the Rockets did close 2016-17 on an 8-4 run.

Tuesday – Dansville (2-0) at Pewamo-Westphalia (1-0) – The Pirates regularly are among contenders statewide in Class C, but Dansville and 6-9 Caleb Hodgson surely would love to take their place starting in the Central Michigan Athletic Conference standings.

Thursday – Rapid River (2-0) at Crystal Falls Forest Park (2-0) – These look like early contenders to go after the top Class D spot from the Upper Peninsula as reigning MHSAA champion North Central is expected to fall back toward the pack.

Friday – Saginaw Arthur Hill (0-1) at Saginaw (0-0) – This one rarely disappoints; all three meetings went Saginaw’s way by double digits last season, but that third one did come in a District Final.

Friday – Hazel Park (1-0) at Detroit U-D Jesuit (2-0) – The Cubs are off to another strong start and have a tough game against East English on Tuesday before Hazel Park comes in looking for another big early win.

Sunday – Detroit Pershing (1-0) vs. Orchard Lake St. Mary’s (2-0) at Ecorse – This looks to be the premier game of the Hoopz 4 Hope Classic, as the Eaglets also have a pair of double-digit wins to start this winter.

PHOTO: Lansing Everett was among teams that began 2-0 to start the season last week. (Click for more from HighSchoolSportsScene.com.)