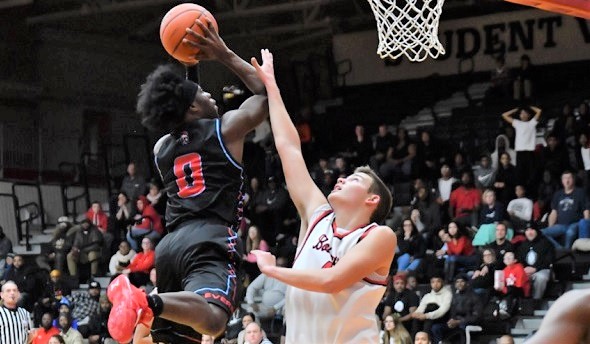 Boys basketball is back and a bit earlier than usual this winter.

But the trails to Breslin Center already are being blazed as we head into first full week of December and second week of this season.

We’ll again begin every week with a “Breslin Bound” look at the most significant results from the week that was, a look at a pair of teams in every division that are making noise and then a quick glance at games to watch in the week to come. (Changes to keep in mind this season – in addition to the boys season starting and ending a week before the girls, the tournament is now organized by Divisions, 1-4, instead of the traditional Class A-B-C-D.)

1. Benton Harbor 67, Dowagiac 66 – The reigning Class B champion held on in a rematch of last season’s Regional Final, which saw Dowagiac’s season end at 17-6.

2. Detroit Martin Luther King 54, River Rouge 51 – Hopes are high for both of these programs, as River Rouge made the Class B Semifinals a year ago and King was a Regional finalist in Class A; they now play in Divisions 2 and 1, respectively.

3. Grand Rapids Christian 60, Wyoming Godwin Heights 59 – These two likely will be ranked among the best in Division 2 when Associated Press polls begin, and the Eagles own the upper hand after avenging last season’s four-point loss.

4. Sterling Heights Stevenson 59, Clarkston 53 – The Wolves graduated a ton and saw one of the state’s winningest coaches retire after back-to-back MHSAA titles, but beating the reigning Class A champion to start the season still had to be huge for the Titans.

5. Ypsilanti Lincoln 80, Ann Arbor Huron 69 – Last season, Lincoln lost by 20 to Huron, which finished 16-6. But the Railsplitters enjoyed the upper hand this time in the high school debut of freshman sensation Emoni Bates.

• Marquette (2-0) – The Redmen started the season with a statement, downing Brighton 63-58 in overtime on the first day of the Petoskey Tip-Off Classic and then coming back the next day to beat the host 53-31. Marquette was 15-6 a year ago after opening with a 17-point loss to the Northmen, who went on to finish 19-3.

• Portage Northern (2-0) – The Huskies finished 6-16 last season, with a pair of regular-season losses to Southwestern Michigan Athletic Conference West champion St. Joseph. Perhaps an upset of the Bears in the District opener was a sign of things to come; Northern downed Coloma (18-3 last season) in its opener 71-66 and then St. Joseph 61-48.

• Clare (2-0) – The reigning Jack Pine Conference runner-up looks to chase Sanford Meridian again after opening with a 58-56 win over Beal City and then taking a league win 53-48 over Roscommon. Clare reached its District Final last season, when it finished 19-4.

• Essexville Garber (2-0) – After closing last season with five defeats in their final seven games to finish 11-11, the Dukes are roaring into this winter. They started by avenging last winter’s loss to Saginaw Nouvel with a 61-53 win and then outlasted neighbor Bay City John Glenn 44-42.

• Ironwood (2-0) – The Red Devils, coming off a 12-9 finish last winter, edged Bessemer 54-52 in the opener and won more comfortably against Bayfield (Wis.), 71-58, to close the week. Both games had notable highlights – the first was won on a halfcourt shot, while the second saw Griffen Revoyr score 45 points (as reported by The Upbeat).

• Sanford Meridian – The reigning Jack Pine Conference champion opened with a 58-49 win over Division 1 Saginaw Heritage, and then started league play with an 81-21 victory over Gladwin. The Mustangs were 21-4 a year ago and reached the Class C Quarterfinals.

• Brimley (2-0) – The Bays are rallying right away after last season’s 20-4 finish and run to the Class D Regional Finals. They started last week by avenging that Regional championship game loss with a 71-49 win over Cedarville, and continued with an 81-49 victory over DeTour. That first win could make Brimley the team to beat in the Eastern U.P. Athletic Conference after finishing second to Cedarville a year ago.

• Engadine (2-0) – The Eagles have improved from two to 12 to 15 wins over the last three seasons, and they’re off to the right start as they try to build on last winter’s 15-6 finish. Engadine scored big in a couple of opening week wins, beating Rock Mid-Peninsula 89-50 and Newberry 91-73. The Eagles also play in the EUPAC.

Friday – Dansville (1-0) at Pewamo-Westphalia (0-0) – The Central Michigan Athletic Conference is loaded with small-school contenders, and Dansville is a popular pick to go far in Division 3 – and beat the Pirates by a point in a Class Regional Semifinal when these two last met.

Friday – Iron Mountain (2-0) at Calumet (2-0) – These two both were league champions last season and are off to fast starts again; when they last met nine months ago the Mountaineers emerged with a 56-44 win and Class C Regional title.

Friday – St. Joseph (1-1) at Stevensville Lakeshore (2-0) – These two finished first and second, respectively, in the SMAC West last season with the Bears winning their games by five and 13.

Friday – River Rouge (1-1) at West Bloomfield (1-0) – The Lakers stumbled to finish last winter but could be back in the mix and show it by avenging last season’s two-point overtime loss to the Panthers.