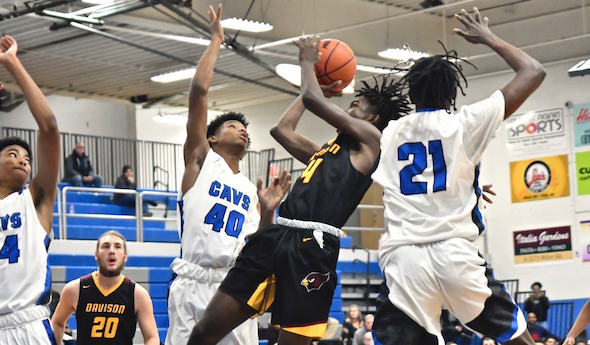 This boys basketball season needed just a few hours of opening night to satisfy the anticipation that’s been building since last season’s MHSAA Finals finished a little more than eight months ago.

We’ll bank on that first week as an indication of what’s to come.

Below is our first “Breslin Bound” report of the boys season, powered by MI Student Aid and based on results and schedules posted for each school at MHSAA.com. Those results have become much more vital this winter – for the first time, there will be limited seeding of the top two teams at the District level based on their Michigan Power Rating (MPR). Check out how every team in the state ranks, and send corrections or missing scores to Geoff@mhsaa.com.

2. Grand Blanc 80, Detroit Douglass 77 – This Horatio Williams Showcase headliner featured one of the state’s best sophomores and juniors and two teams that should be making pushes in March in Divisions 1 and 2, respectively.

3. Saginaw 88, Saginaw Arthur Hill 76 – After scoring 101 points in its opener, Saginaw put up another big number in its first matchup of the season with the rival Lumberjacks.

4. Ferndale 66, Flint Beecher 55 – The Eagles also posted an impressive win at the Horatio Williams event, getting past a Beecher team looking toward contending in Division 3 again after making the Quarterfinals last season.

Ann Arbor Huron (2-0) Last season’s 13-8 record was a bit deceptive; two losses were one-pointers and its District defeat came in overtime. The River Rats are starting out on the positive end of those close games this winter, with their first win 53-50 over returning Division 3 semifinalist Detroit Edison.

Marquette (2-0) For the second straight season, Marquette opened with wins over Brighton and Petoskey – this time by eight and three points, respectively. Last season, that start turned into a 19-4 finish with league and District championships.

Detroit Communication Media Arts (2-0) CMA improved five wins from 2017-18 last winter to get to 11-10, and may be on its way toward taking another step. The Pharaohs opened with a 74-48 win over Pershing to avenge last season’s one-point loss to the Doughboys, then got past Farmington in overtime 70-68 after Farmington had opened with an impressive win over Wayne Memorial.

Imlay City (3-0) The Spartans are coming off two straight sub-.500 seasons but did improve two wins last winter to 10-12. The Harry Moore Tournament at Capac gave them an opportunity for three wins during the first week, and Imlay City capitalized by defeating Deckerville in the championship game.

Burton Bendle (2-0) The Tigers are halfway to equaling last season’s 4-17 success thanks to double-digit wins over Flint Southwestern and Flint New Standard Academy. The 84-74 win over Southwestern avenged last season’s one and 11-point losses to the Jaguars.

Farwell (2-0) The Eagles haven’t won more than five games in a season since 2013-14, and tied that high of five last winter. But they are 2-0 for the first time in at least a decade, opening with a 65-64 win over Remus Chippewa Hills after losing to the Warriors by 17 a year ago.

Mayville (2-0) The Wildcats over the last six seasons have gradually climbed, progressing to an 8-14 finish a year ago. Last week gave them their best start in at least a decade, as Mayville stacked double-digit wins over Akron-Fairgrove and Caseville.

Three Oaks River Valley (3-0) The Mustangs doubled their success last season from 2017-18, going from 6-15 to 13-9 and despite a 1-3 start. River Valley opened last week with double-digit wins over Decatur and White Pigeon and then avenged a pair of losses from last season to Marcellus Howardsville Christian.

Tuesday – Grand Rapids Catholic Central (1-0) at Grand Rapids Christian (2-0) – GRCC won the regular-season and District matchups between these two last season, the latter on the way to a Division 2 Regional Final.

Thursday – Pittsford (1-1) at Bellevue (1-0) – These two both won divisions of the Southern Central Athletic Association last season; Bellevue won their regular-season meeting and the rematch in the Division 4 Regional Final.

Friday – Kalamazoo Central (1-0) at Benton Harbor (2-0) – These annual southwestern powers are meeting for the first time since the 2014-15 season.

Saturday – Detroit U-D Jesuit (1-1) at Detroit Edison (1-1) – As noted above, both ended last season at Breslin Center, Jesuit in the Division 1 Final and Edison in the Division 3 Semifinals.