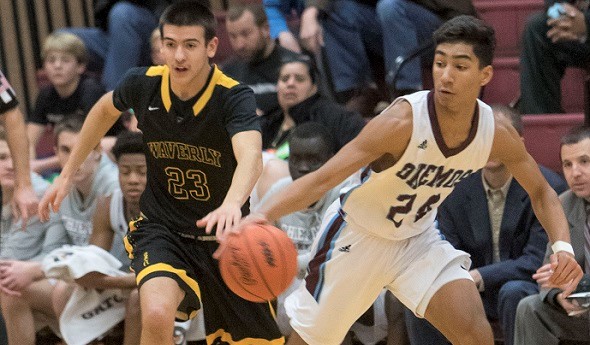 Last week from a boys basketball point of view was one to mostly forget, as just about every team statewide was forced to postpone one if not more games – bad news as we’re less than a month from the start of District play.

But thanks in part to a memorable event at Grand Rapids Union on Saturday, we closed on a high note – and there are plenty of critical league matchups this week to get us rolling again.

1. Benton Harbor 86, Ypsilanti Lincoln 83 – Another week, another big-time matchup for the Tigers, and this time they moved to 15-1 by handing Lincoln just its second loss of the season in the headlining game of the Redhawks Showcase at Grand Rapids Union.

4. Milford 37, Walled Lake Northern 34 – The Mavericks handed Northern their first loss of the season, in part leading Waterford Kettering to secure a shared championship in the Lakes Valley Conference.

5. Westland John Glenn 67, Wayne Memorial 63 – John Glenn finished a regular-season sweep of Wayne to create a three-way tie for first in the Kensington Lakes Activities Association East between those two and Belleville.

• Canton (13-1) – The Chiefs can lock up a share of the KLAA West title Tuesday against second-place (tied) Northville, which they beat by 19 on Dec. 20. Canton has won 24 straight league games, including a perfect run last season through the former KLAA Black. Canton also has won 13 straight this winter since falling to reigning Class C champion Detroit Edison by just three points, 69-66, in its opener.

• Okemos (14-1) – A loss three weeks ago to Detroit Catholic Central has been the only detour from an otherwise perfect run for Okemos this winter. The Chiefs can lock up a share of the Capital Area Activities Conference Blue title – which would be their second straight – with wins this week over Holt and East Lansing.

• Dearborn Divine Child (11-3) – The Falcons guaranteed themselves at least a share of the Detroit Catholic League AA championship Saturday with a 61-58 win over former leader Detroit Loyola – which had defeated Divine Child by six in overtime on Jan. 4. The title is the Falcons’ third straight either shared or outright, and the team’s only other losses are to Edison and another league leader in Rochester Adams.

• Grand Rapids South Christian (11-3) – A dramatic finish put Grand Rapids Christian among our top-five results above, but South Christian’s 56-50 win over the Eagles on Friday could end up much more significant. It avenged the Sailors’ loss in the teams’ first meeting Jan. 4, and put South Christian in first in the Ottawa-Kent Conference Gold as well as extended an eight-game winning streak since that defeat.

• Detroit Pershing (14-1) – The Doughboys finished a 10-0 run through the Detroit Public School League East-Town heading into this week’s PSL tournament. Pershing could be making some big plans over the next two months – the only loss this winter came by four to Toledo Scott, and an overtime win over Ypsilanti Arbor Prep early remains impressive. And don’t forget, Pershing’s 2017-18 season ended with a pretty strong six-point defeat to Edison in a Regional Semifinal.

• Oscoda (14-0) – The Owls won eight games two seasons ago and 14 last winter, and they’re guaranteed to at least equal that finish as they close in on an anticipated North Star League Big Dipper championship. Oscoda downed second-place Mio on Friday for the second time this season, 41-34, and after winning the first meeting by two points.

• Frankfort (10-2) – The Panthers trail Northwest Conference leader Maple City Glen Lake by just a game heading into their rematch Thursday – Glen Lake won the first meeting by 25 on Jan. 9. Frankfort’s only other loss came Dec. 12 to Elk Rapids, a contender in the Lake Michigan Conference, as the annual success has continued under first-year coach Daniel Loney.

Monday – Martin (9-1) at Coloma (8-4) – These two are tied for first in the Southwestern Athletic Conference Lakeshore after Coloma’s win Friday over another former co-leader Fennville.

Tuesday – Hudsonville Unity Christian (12-2) at Holland Christian (11-2) – Unity Christian can’t lock up the O-K Green title yet, but only one of its league games has been decided by single digits and the Crusaders won the first meeting of this series by 21 on Jan. 8.

Tuesday – Kalamazoo Central (9-2) at Mattawan (11-0) – The first-place team in the Southwestern Michigan Athletic Conference West hosts the leader of the SMAC East.

Tuesday – Kalamazoo Hackett (11-1) at Schoolcraft (13-1) – Thanks to a 16-point win in their first meeting Dec. 18, Hackett owns a slim lead over Schoolcraft in the Southwestern Athletic Conference Valley.

Saturday – New Lothrop (10-3) at Mount Morris (10-2) – Mount Morris is tied for first during this inaugural season for the Mid-Michigan Athletic Conference, but New Lothrop is just a game behind and also sees co-leader Ovid-Elsie again.

PHOTO: Okemos, here against Lansing Waverly, can clinch a league title with a pair of wins this week. (Click to see more from HighSchoolSportsScene.com.)