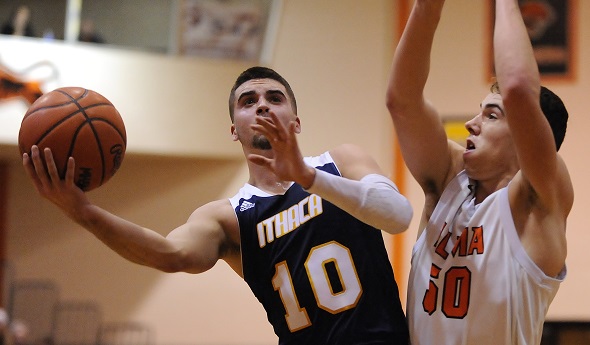 By Geoff Kimmerly
Second Half

We’re only a week away from the start of the MHSAA Tournament, and it’s tough to not look a few days ahead to the matchups on the way – but we must to recognize a few more of the successes so far.

Most weeks during the season, we check in with four teams from each class that have been especially impressive. Here’s a look at 16 more that could ignite a run when Districts begin next week.

Clarkston (15-2) – After splitting with North Farmington, the Wolvers must defeat sixth-place Tory Athens on Tuesday to clinch a shared Oakland Activities Association Red championship. It would be at least the fifth straight league title for Clarkston, which made the Class A Quarterfinals last season and looks poised again with its only other loss to undefeated Macomb Dakota in December.

Grand Rapids Christian (17-1) – The Eagles clinched an outright Ottawa-Kent Conference White championship with a 52-40 win over second-place Lowell on Friday and have won 13 straight since falling to Hudsonville over holiday break. A matchup with reigning Class B champion Wyoming Godwin Heights on Tuesday is intriguing.

Grosse Pointe South (16-3) – The Blue Devils already are two wins better than last season and have clinched the Macomb Area Conference Blue championship with a game to play. They open District play next week against Detroit Martin Luther King, looking to avenge a 54-45 loss to the Crusaders on Jan. 18.

Muskegon (16-3) – The Big Reds have won nine straight and clinched the O-K Black title with two games to play in the league, adding a 72-71 win over second-place Zeeland East on Friday to finish a perfect run in the conference. They haven’t lost since falling to Detroit East English and Wayland (which are a combined 32-5) in back-to-back games in mid-January.

Allendale (16-2) – The Falcons have won 16 straight and finished an outright O-K Blue title run Friday with a 52-50 win over second-place Coopersville. Allendale was second in the league but only 12-8 overall a season ago.

Benton Harbor (14-4) – Despite an overtime loss Friday to Portage Northern, Benton Harbor has clinched the Southwestern Michigan Athletic Conference West championship after finishing second last season on the way to the Regional Finals. A matchup with SMAC East champion Kalamazoo Central (15-3) could be telling of a run to come.

River Rouge (15-3) – The Panthers are closing in on another nice finish following up last year’s league and District titles, with a defeat to Detroit Allen in mid-January the only one in the Michigan Metro Athletic Conference this winter. River Rouge fell to Romulus and Flint Beecher over a 10-day period earlier this month, but came back to beat Saginaw Arthur Hill by a basket and can close the regular season with six straight wins.

Williamston (16-3) – The Hornets have taken on and beaten most of the best in the Lansing area, with losses only to Lansing Catholic (17-1) in overtime, East Lansing (18-0) and DeWitt (15-3). They came back to beat co-leader Lansing Catholic by three in the rematch and beat Portland on Friday to secure a shared Capital Area Activities Conference White championship.

Adrian Madison (17-2) – The Trojans finished a perfect 14-0 in the Tri-County Conference to win the league title by three wins after finishing a win behind Morenci in 2014-15. The next big test comes Tuesday with Class B Hillsdale (16-2).

Ithaca (17-2) – After sharing the Tri-Valley Conference West title last season, Ithaca has won it outright with a game to play against seventh-place St. Charles. The Yellowjackets’ only losses were to Class B Alma and Frankenmuth, which are a combined 32-4.

Monroe St. Mary Catholic Central (17-1) – The Huron League title belongs to the Falcons again after three straight second-place finishes; they finished a perfect league run with a 64-59 win over Milan on Friday and have won 15 straight since falling in overtime to Adrian Lenawee Christian on Jan. 8.

St. Ignace (17-2) – It’s always easy to forget about the Saints because the school’s girls program is so strong. But St. Ignace’s boys are led by Gage Kreski, who set the Upper Peninsula scoring record with more than 2,000 career points Saturday, and they finished a perfect run through the Straits Area Conference.

Boyne Falls (17-2) – The Loggers finished off a pair of league opponents last week to earn a share of the Northern Lakes Conference championship with Alanson, which it lost to Jan. 5 but then beat Jan. 29. The title was at least the fifth straight for Boyne Falls.

Marshall Academy (18-2) – The Griffons closed the regular season with 10 straight wins and their only losses to Bellevue and Vestaburg. Those two losses and a five-point win over Camden-Frontier were the only games this season that didn’t result in double-digit wins for the Mid-South Conference champ.

Morenci (13-6) – Last season’s Class D runner-up went through a bit of a tough stretch during the first half of February, losing three of five games. But the Bulldogs have since won three straight and finished second to Adrian Madison in the TCC.

Waterford Our Lady (15-3) – Despite a loss to Class C Royal Oak Shrine in the Detroit Catholic League C-D Tournament Final, the Lakers did sweep Shine to win their division title and look good to make another run after reaching the Class D Semifinals last season.

PHOTO: Ithaca’s Jake Smith works to get around an Alma defender in their game earlier this season. (Click for more from HighSchoolSportsScene.com.)