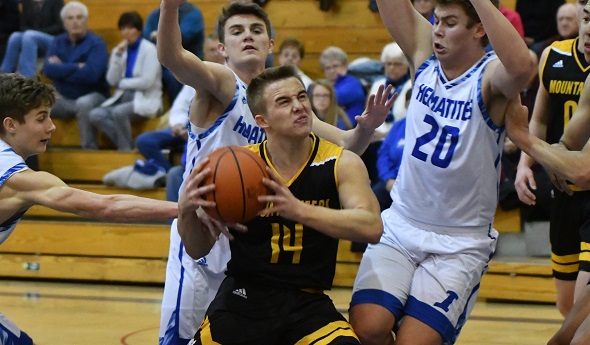 We’re almost there. In fact, by delaying this week’s Breslin Bound report until Tuesday, we’re a day closer to the end of this boys basketball regular season and beginning of District play Monday.

But a few league championships remain undecided, and there is still plenty to cover before we switch gears to the postseason.

Next week, we’ll preview the most intriguing District brackets in every division. Click here to get an early look at those matchups.

1. Benton Harbor 72, River Rouge 62 – The Tigers won again in this rematch from last season’s Class B Semifinals – and possible preview of a Division 2 matchup coming next month.

2. New Haven 64, Roseville 55 – The Rockets won the Macomb Area Conference Red/White Tournament title by defeating one Red co-champ in this game after defeating the other Sterling Heights Stevenson in the semifinal.

3. Detroit U-D Jesuit 63, Detroit Catholic Central 54 – The Cubs finished a perfect run through both the Detroit Catholic League Central and then A-B Tournament bracket, with DCC finishing second in both.

4. Detroit Cass Tech 80, Detroit Renaissance 56 – The Technicians have won nine of their last 11 games and with this victory added a Detroit Public School League Tournament title to a shared Midtown championship.

5. Muskegon 66, Kalamazoo Central 59 – The Big Reds claimed this matchup of league leaders to extend their winning streak to 11.

• Detroit U-D Jesuit (17-2) – The Cubs have won 11 straight games, with the most notable of the run against DCC twice and Flint Beecher by a point on Jan. 26. The only losses this winter came early, against New Haven on Dec. 1 and then Illinois championship contender Chicago Morgan Park on Jan. 5. Jesuit has reached the MHSAA Quarterfinals five straight seasons and could be on the verge of running that streak to six.

• Ann Arbor Pioneer (17-2) – The Pioneers, 11-10 a season ago, have locked up the Southeastern Conference Red title in a league where four of six teams have winning records. They added an impressive 56-44 win over the weekend against PSL Midtown co-champ Detroit Martin Luther King. The only losses came before the new year, against eventual league winners Canton and Wayne Memorial.

• Fremont (16-1) – A 60-59 overtime win over Grant on Friday clinched the Central State Activities Association Gold title, Fremont’s second straight after sharing last season with Big Rapids. This championship is outright, ironically after the Packers opened league play with their only defeat Dec. 7 to Reed City. Next up, Fremont will go for a second straight District title as well.

• Ovid-Elsie (15-1) – The Marauders have clinched a share of the inaugural Mid-Michigan Activities Conference championship, avenging their lone loss of the season Friday with a 69-66 double-overtime victory over second-place (tied) Mount Morris. Ovid-Elsie can clinch outright against the other second-place team, New Lothrop, on Thursday. The Marauders entered the new league coming off last season’s Tri-Valley Conference West title, and they too will play next week for a second straight District trophy.

• Maple City Glen Lake (16-2) – The Lakers clinched an outright Northwest Conference title with a win over Benzie Central on Saturday and have won six straight since falling to Division 2 Williamston at Saginaw Valley State on Jan. 21. The only other defeat was to another strong Division 2 opponent, Holland Christian, on Dec. 28. Both losses no doubt served as great prep as Glen Lake looks to get back to Breslin after finishing Class C runner-up a year ago.

• Dollar Bay (16-3) – After making the Class D Semifinals coming off a perfect regular season in 2018, the Blue Bolts started this one slowly (relatively speaking) at 4-2. But they’ve won nine straight and clinched a share of the Copper Mountain Conference Copper Country championship, with a chance to finish the title outright Friday if they can avenge an earlier loss to Chassell. Dollar Bay also won’t see nemesis Bessemer (the other two defeats) until possibly the Regional if both advance next week.

• Wyoming Tri-unity Christian (15-3) – The Defenders sit second in the Alliance League thanks to a one-point loss Jan. 22 to Division 3 and league leader Potter’s House Christian. But Tri-unity could make another of its usual long postseason runs, especially with Potter’s House in a different division after eliminating the Defenders in the District a year ago. Tri-unity’s only other losses were to Division 3 Pewamo-Westphalia and Grandville Calvin Christian.

Tuesday – McBain (14-3) at Manton (13-4) – McBain’s 45-42 win on Feb. 5 has the Ramblers still sitting atop the Highland Conference standings, but a Manton win could result in a shared championship when this week is done.

Friday – DeWitt (16-2) at Okemos (17-1) – The Chiefs own a share of the Capital Area Activities Conference Blue title thanks in part to a 41-35 win over the Panthers on Jan. 18, but DeWitt can grab a share by winning this rematch.

PHOTO: Iron Mountain's Marcus Johnson works to get to the basket during a Feb. 1 win over Ishpeming. Iron Mountain is one of 14 unbeaten teams left statewide. (Photo by Cara Kamps.)