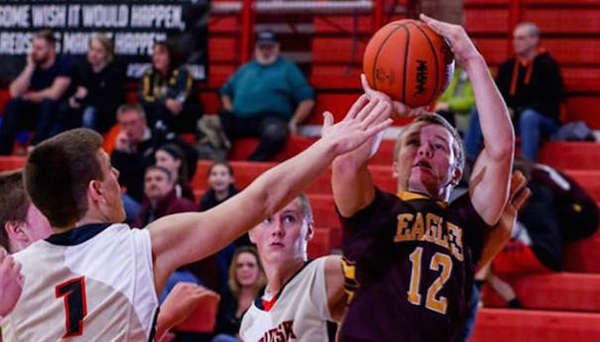 As conference races begin to heat up on both peninsulas, the best of the best are starting to show it against arguably their toughest opponents – those most familiar.

Our top game from last week in this week's Breslin Bound report – powered by MI Student Aid – features two such neighbors facing off again as they have for decades, while a number of rivals also saw each other for the first of two meetings this season.

1. Saginaw 62, Saginaw Arthur Hill 49 – This annually is one of the state’s best rivalries, and the Trojans have the edge in the Saginaw Valley League North with the rematch coming Feb. 3.

2. Detroit East English 73, Kalamazoo Central 63 – After being stunned by Detroit Osborn on Friday, East English came back to win the premier game of the Floyd Mayweather Classic at Grand Rapids Ottawa Hills on Saturday.

3. Wyoming Godwin Heights 114, Wyoming Kelloggsville 75 – The Ottawa-Kent Conference Silver includes three teams from Wyoming that are a combined 20-2, but Godwin Heights remains the leader at 8-0.

4. East Lansing 70, Holt 66 – The undefeated Trojans should be contenders in Class A, and now have survived a second challenge in the strong Capital Area Activities Conference Blue.

Saginaw (7-1) – The Trojans opted up to play in Class A again despite an enrollment of just fewer than 600. And they’ll again be in the mix, judging from last week’s 62-49 win over Arthur Hill; the lone loss was to Chicago Orr, which also has wins over Detroit Martin Luther King and Pershing.

Wayne Memorial (7-1) – After finishing 8-14 only a season ago, Wayne has asserted itself atop the Kensington Lakes Activities Association South. Friday’s one-point win over Canton put the Zebras in first alone and the Chiefs in second.

Benton Harbor (9-0) – The Tigers are looking like a challenger in Class B again after a step back, relatively speaking, to 15-6 last season. Last week showed plenty – a 55-45 win over Class A Battle Creek Central and an overtime win over struggling but recently successful Stevensville Lakeshore.

Richmond (7-1) – Better known for football and wrestling, Richmond finished third in the Blue Water Area Conference last season but has an early leg up with a win over co-champion Imlay City and that other co-champ, Yale, coming up Tuesday.

Gobles (8-2) – The Tigers’ defeats have come to Class B one-loss teams Fennville and Wyoming Lee, and they are closing in on last season’s 12-win total. The rematch with Fennville comes Jan. 31 and could end up deciding the champion in the Southwestern Athletic Conference Lakeshore.

Negaunee (7-0) – The Miners have won all of their games by at least 16 and six by at least 21 points to keep pace with also-undefeated Norway in the Mid-Peninsula Athletic Conference. Negaunee split the league title last year with Iron Mountain, winning its first 19 before losing its final two games.

Fowler (6-1) – The Eagles took a mid-December loss to Bath, but remain the mix in the Central Michigan Athletic Conference after last week’s 63-56 win over rival and 2016 Class D semifinalist Fulton.

Deckerville (6-2) – These Eagles are looking to challenge Dryden again after splitting the North Central Thumb League title last season, and will circle the March 2 rematch with the Class C Cardinals after falling to them Dec. 12.

Monday – Negaunee (7-0) at Marquette (7-1) – Two Upper Peninsula league leaders will face off in one of the north’s top nonleague matchups this season.

Tuesday – Detroit Martin Luther King (6-1) at Detroit East English (7-1) – First place in the Detroit Public School League East Division 1, and superiority in the league as a whole, could be at stake.

Tuesday – Buckley (5-0) at Frankfort (5-0) – The Northwest Conference co-leaders are also potentially two of the best in all of Class D.

Tuesday – Dundee (9-0) at Hillsdale (8-0) – These two lead the Lenawee County Athletic Association and also are rising up the ranks in Class B.

Tuesday – Orchard Lake St. Mary’s (7-1) at Detroit U-D Jesuit (6-2) – The Eaglets are in the Detroit Catholic League Central conversation again, and can take a commanding step against the reigning Class A champion.

PHOTO: Deckerville, attempting a shot, earned a win over Sandusky earlier this season and sit 6-2. (Click to see more from Varsity Monthly.)